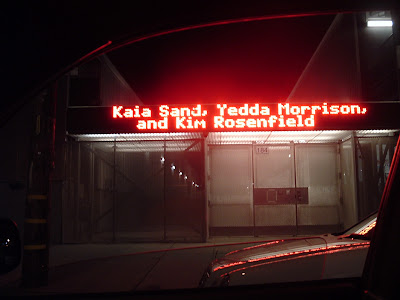 These Three Women Rocked the House!

In various ways, history--no, maybe it is the present and its barrage of catastrophe--and performance turned up and over in the disparate work of these three poets.


Kaia Sand read "Remember to Wave," and poems using only language culled from NAFTA and her poem "The President Probably Talks." You can read this latter poem and others by Sand online HERE.

Sand put together a contrapuntal performance: she mined the local, putting next to one another instructions and lists for materials to be brought to an "assembly center," read Japanese Internment Camp (note how they had names like Harmony Camp and Heart Mountain)which were read onstage by SPT's new director Samantha Giles, while Sand interspersed lines that seem to be culled from marketing information and other sources about "revolutinary pod storage containers."

Lines I jotted down while Kaia read:

"What a relief portable on-demand shelter"

Out of the language of NAFTA, Sand put together writing that is simultaneously beautiful and horrific.

"in the use of the
in the man of the"

"a burn is full of feeling"

Yedda Morrison was up next. The lights were dimmed, a little battery-operated lantern sat on the podium, Yedda donned a camper's khaki vest, and at one point, mosquito netting. Morrison's reading was riveting. I sat in my seat and felt every cell of my body leaning forward. She held us at a pitch as she read from Girl Scout Nation. I couldn't jot down any of Morrison's lines because Timken Hall was dark and I hadn't brought enough cash or a check (who carries a checkbook anymore?) to buy a copy there. Large, and to the side of her on the screen: A photo of--was it a stream with mist?--and trees. Black and white. This must be one of Morrison's photos--? Her reading was haunting, scary, gorgeous. Narrative shows up like bread crumbs on a trail and then you are looking up, listening to all those bird calls--"who cooks for you," "who cooks for you."

About Girl Scout Nation, Gail Scott has written: "There is rage, here, the body where it meets the staggering earth, contained in the tiny catapulting figure of Scout, herself contained by the entire rage of the planet; and this rage is the more effective for being 'the deep glowing red inside the barrel,' for being nowhere and everywhere, for being a girl, 'just a girl there/ daddy.' Both primal and urbane, Girl Scout Nation is rich hard realism on its way to Disney upside down."

Kim Rosenfield took the stage following Morrison and read from re: evolution. Her reading also entailed performace--scraps of song refrains--"helpless, helpless, helpless" as she let go dry, wry, and stuttering lines in the midst of song:

"who has the power to establish a version of the self"

"breathe before you think"

"what happens when you like the merchandising better than the man"

"almost the last thing that keeps people together is the law"

"Put this on the shelf (oh but please take it off again) next to Ashbery’s Girls on The Run, the book-length proses of Carla Harryman and Stacy Doris, and your DVDs of Guy Maddin, L’Atalante and Wladyslaw Starewicz’s The Mascot—fairy tales creepier to adults who know a thing or two about “ammonia and advice,” and perhaps less about keeping balance in a world of eternal, Buffy-style recurrence. Rosenfield’s part collage, part suede and suave therapeutic technique creates a “voice” that wavers, furtive yet spikily resonant in the amplified tick of the second hand, as the carnal “self” is further contaminated by the freezer-burn of a world run by patents, portents, and hawkish impatience, yet begs to extend its lease with the mirror stage. Read this book for its honey and ash, and sleep easier."

Want to read more the work of these writers? Check out SPT's blog HERE for links.

Here are some formal bios for these three:

Writer and visual artist Yedda Morrison was born and raised in the San Francisco Bay Area. Morrison’s books include: Girl Scout Nation (Displaced Editions, 2008), My Pocket Park (Dusie Press, 2007), and Crop (Kelsey Street Press, 2003). Morrison has exhibited her work in the US and Canada and is currently represented by Republic Gallery in Vancouver, BC (republicgallery.com). She lives in Montreal.


Kim Rosenfield is a poet and psychotherapist. She is the author of three books of genre/blurring language; Good Morning--Midnight-- (Roof Books 2001), which won Small Press Traffic’s Book of the Year award in 2002, Tràma (Krupskaya 2004), and re: evolution (Les Figues Press 2008). She lives in NYC with her husband, poet Robert Fitterman and their daughter, Coco.

Kaia Sand is the author of the poetry collection interval (Edge Books 2004), selected as a Small Press Traffic Book of the Year, and co-author with Jules Boykoff of Landscapes of Dissent: Guerrilla Poetry and Public Space. Dusie Press published her wee book, lotto, and Sand has participated in the dusie kollektiv for three years, making the chapbooks heart on a tripod and tiny arctic ice. Jim Dine created two artist book based on Sand’s poems, lotto and tiny arctic ice. Remember to Wave, multi-media investigations of political histories lodged in Pacific Northwest of the United States, is forthcoming with Tinfish Press. The NAFTA, a chapbook of collages, is forthcoming with Duration Press e-chap series. Sand co-edits the Tangent Press. 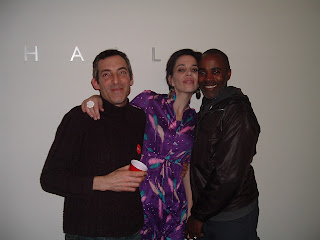 And then last, but certainly not least: a gift from David Brazil of copy of TRY!, a photocopied and stapled journal he edites with Sara Larsen. 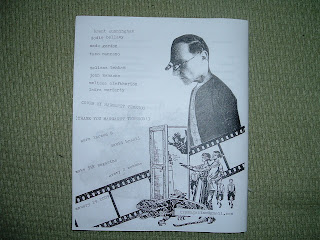 Posted by Robin Tremblay-McGaw at 9:39 AM