It felt like summer not January in San Francisco last night as Eleni Stecopoulos and I walked through the Mission to Alley Cat Books on 24th and Treat to hear some poetry.

We arrived to catch the tail end of Ivan Argüelles’s reading. Up next were Will Alexander and Janice Lee, each of whom read for about 15 minutes, Lee from her new book Damnation and Alexander from The Sri Lankan Loxodrome. After a break, Alexander and Lee read from their new Solar Luxuriance chapbook, a collaboration entitled  The Transparent as Witness. The two poets met some time ago at a reading and soon after decided to work together, collaborating by email. Alexander sent Lee a piece and she wrote back. Lee noted how easy this collaborative process was, how little they edited their pieces, and how a third-voice seems to have entered the work; neither could remember who had written some of the sections.

The reading was beautifully organized; Alley Cat is a great venue. This was my first opportunity to hear Will Alexander and I couldn’t help smiling. His work takes me for a ride; I’m often not sure where I am going but it is always a cosmic, linguistically juicy trip. Lee’s work is new to me and this provided an intriguing introduction.  While the prose in Damnation reads as straightforward, some of her other books, for example, Kërotakis, are invested in more wayward explorations. You can read a review of Kërotakis here at Bookslut.


Here’s an excerpt from The Transparent as Witness:


As sidereal cortex, there then exists a natural contagion, a magnetism no longer contained within the personality itself. One then exists as a ubiquitous solar germination, thereby knowing the secondary aspects of partially arisen telepathy. The latter being a symptom of what I’ll call the overwhelming. When Sombrero Galaxy is only a figment of this cortex, we know that the human field is morphing. Not according to the pre-conditioned idea, but akin to boulders which transgress the eons. This being the condition of a spiraling supra-kinetic. It being the hidden power which will allow the blood to turn green, allowing life to roam outside the palpability of the given. This being ferocity of insight which assimilates the unknown as motion.


This ferocity of insight we ought to hold on to, the goal being in reach, being easy to remember, being easy to forget. We enter a new place and fell the urge to create new memories. Or change old ones to fit the new paradigm. Memories are memories. They are malleable. They are forgettable. Painting can be done from inside a canvas, the mutilated shapes and colors that scream at the hand until they feel finished. Paint a woman’s face in her own blood. Sleep inside an egg as it slowly cooks in a pot of boiling water. The fragile shudder of the dream-wolf who nudges at the small of your back. You are in the wrong place. Or this is the wrong time.


This has nothing in common with personal insular mass or personal jaundice quaking in the atmosphere, which thereby allows an objective examination of vertigo, knowing its scales, its rhythms, its optical azures shaking within the turbulence of eggs. One can then ask about the solar locale and its referential state of particles. Perhaps they can be called in-human suns rising and setting over the wrathful sky of Saturn. Perhaps they vary their vexing angles within a quarter billion miles per hour. In this sense each planet has its various registrations. Take Earth, with its wastes of ice and floods, its uninhabitable parching canals, without the need of anthropomorphic deafening.  For instance, without the chilling posture of Descartes or Hobbes, or hoards of the befuddled following Jesus Christ. This being the body as etched tungsten attempting to dissect zodiacs, by means of simulated fire or darkness. Simple nuance is never decreed. Ghosts are destroyed. Thus, the universe seems willed by an absence of kindling   (10-11).


Posted by Robin Tremblay-McGaw at 4:32 PM No comments: 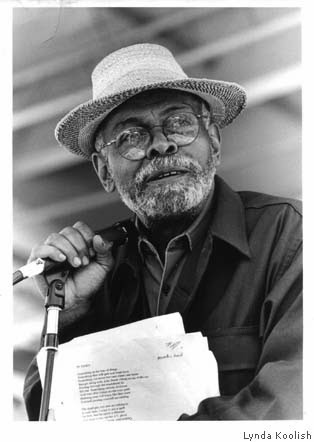 an excerpt from  "How You Sound??"

"HOW YOU SOUND??" is what we recent fellows are up to. How we sound: our peculiar grasp on, say: a. Melican speech, b. Poetries of the world, c. Our selves (which is attitudes, logics, theories, jumbles of our lives, & all that), d. And the final...The Totality Of Mind: Spiritual...God?? (or you name it): Social (zeitgeist): or Heideggerian umwelt.

Posted by Robin Tremblay-McGaw at 4:09 PM No comments: