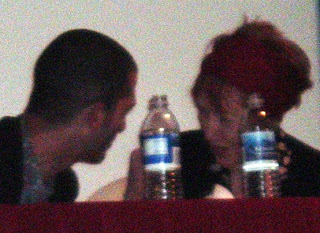 Thinking about BEVERLY DAHLEN’s presence among us

On a bookshelf, to the left of my work desk, close at hand — where I can see their names and titles and reach for them—stands a particular family of books that have provided for me, since the seventies, a unique intellectual and spiritual fuel for the work of writing beyond, and at a sideways angle, to what once presented itself as a fixed yet devotional world of poetic models.

Across the topmost shelf are the works of Beverly Dahlen, Frances Jaffer and Rachel Blau DuPlessis, together with Barbara Guest, Lorine Niedecker and H.D. Theirs were the poems that sustained me in that particular struggle of the ‘70s to claim legitimacy for a voice located & described from, among other things, a gender’d perspective shaped by Dickinson’s need to tell it slant.

In my shift to the West Coast, it was Beverly’s work that I first encountered as my contemporary--a force of urgent psychological investigation and risk; a mapping of grief’s ancient lineage (its substitutions and wreckage), the pervasive history of our own generation’s political / economic class divides (fury, flat out)…and the notation of these registers as the stop & start of ambivalence and hesitancy willing to make itself visible within the certain intentions of the poem’s making.


Zero, the neonate, the not nothing. The potential.

that was the problem of the new, that something was
potential within the void, that certain potentialities were
appearing constantly, and that it was a larger problem than
that. When did you get the news. How long would it take you
to find that out. When would it reach your ears, finally, that
the world was not flat, that the sun did not come up, that we
came up rather around it.
[ Page 80, from “A Reading—8-10”, Oct. 29-Dec. 31, 1979]


I met Beverly through the poets Mark Linenthal and Frances Jaffer, with whom we later shared Poetry Center work at San Francisco State as well as variously constructed conversations around current poetic practice. But before that work began, and soon after I moved from NYC to San Francisco, Beverly invited me to join a small group of writers who met regularly to read theirs and others’ poems aloud, followed by a give & take discussion.Members included Bev, George Stanley, Larry Felson, Bill Anderson and Jack Gilbert—a very feisty group. The conversations were investigative, rigorous and often politically at odds; the writing tended towards a model of understatement, modesty and severity that stood in great contrast to the rollicking, performative and painterly world of NY school writing I’d encountered previously on the Lower East Side. A necessary correction began to register, already implanted by the work of George Oppen. The times felt perilous and
beyond difficult.

Spicer’s work figured prominently in these discussions and arrived as essential news, an invitation to trust the peculiar shifts and juxtapositions of one’s interior “babble.” His thinking described what I recognized to be the case but had found no language for. At its simplest, I took his idea of the poet as transmitting/receiving instrument, capable of casting broadly—through time and distance—with the capacity to capture and channel the detail that awaited noticing, decoding and voicing within one’s evolving community. Importantly, it defined and underlined a place for each poet willing to make the jump without the guarantee of a readership.


A few years later, Frances Jaffer invited Bev and me to join her in an informal writing group and it was within these years of sharing work that we began to read essays by several of the prominent French women post-structuralist thinkers who followed and /or took issue with leading French philosophers. We read Carolyn Burke’s translation of Luce Irigaray in the journal SIGNS and through a friendship with George and Mary Oppen, we began to read the essays of Rachel Blau DuPlessis. I mention these American scholar/writers, in particular, because the works they were writing about suggested parallel ideas of linguistic rupture and clamoring, multiple selves — vs. the singular self — wanting voice. In these writings we began to find an exciting permission to assert the poetics and related practices that each of us was attempting to forge in her own way.

This was the core conversation that led to the necessity of our inventing the modest journal HOW(ever) that saw its first publication in May 1983 and continued through January of 1991. We were joined in 1985 by Susan Gevirtz, with co-editing work on numbers 1-3,of the final volume VI (1990-91) by Myung Mi Kim and Meredith Stricker.

What I’ve described is not finished; but it was approximately at this point when non-mainstream poetics and practice began to enter the known terrain of the writing community and contributed to the multiplicity we all now almost take for granted.

Beverly’s oracular voice has always been a singular part of this claim, with its
uncompromising insistence on transmitting the frayed and fragile nature of being human, providing a gathering point we are all sustained by. I believe I can speak for many of us here, whose poetry has expanded and deepened because of that writing Beverly has continued to listen for and pin down…and let fly.
Posted by Robin Tremblay-McGaw at 2:20 PM