Jocelyn Saidenberg and Brandon Brown in the Condensary Reading Series

Saturday night, after work at the library and after working through confusing carpooling plans, Camille Roy and I practically flew across the Bay Bridge, traffic having wondrously evaporated; We missed our exit, but were back on track in a moment, arriving in Oakland for the Condensary Reading Series, hosted by Jack Frost and Zack Tuck, just as it was beginning. The house was jam-packed. Brandon Brown read first though I hesitate to call what Brandon does reading. It is more of a performance. As an audience member, you're always a little unanchored, never quite sure where the performance begins or ends, or when Brandon is improvising, or when he's reading what's on the page. His references traverse a whole array of sources--Greek texts, pop culture, politics, the body, sex, appetite, hip hop, poetry, the personal. This is all part of the pleasure of Brandon's writing, writing that Camille described as juicy, or was it, tasty?  It is great stuff, raw and intricate, bawdy and scatological, high pitched and searing.

STAR WARS
Ugh, I would never go to Burning Man in a million
years. You guys have fun with that one. The window
for my going to Burning Man shut tight
in 1983 when I turned five and my cerebral system started
sloughing off the gilt pillars of progress.
Given the Tarkovsky-shot brain death I’ve suffered
since, I don’t need to fiddle mushrooms under a Pepsi
sign in Nevada. What little pop sensibility still fires
bursts via pre-Homeric river-rhythm mimic.
My performance reviews just barely adequate. My chapbooks
barely streaming across the scarred surface of a heaving prosthesis.
I’m talking about the Internet, and I’m referring to Burning Man. Okay,
I’ll go to Burning Man. So I can blaze in an incendiary nostalgic
anti-Jacobinism, since Burning Man is a nationalist display of
saturated mores. You know how that band Crass made flyers in 1978 that read Germany got Baader-Meinhof, England got punk? If I wasn’t busy packing the back of the Saab with psilocybin and Ciroc I’d bend over a Xerox, engrave the relevant apodosis: America got Star Wars. Both Burning Man and Star Wars express something fundamentally true about our culture ,which is that given the choice between collective activity ensuring the lessening of worldwide violence in the name of equalite, we’d rather burn one and wallow in the most gloriously degraded archetypal representations of such violence history has ever considered. Germany got an organized cell of native revolutionaries determined to stage a protest which would induce true trauma to the ruling classes and still engage the sympathy of the ruled. England’s poor and wayward bourgeois youth faced a literal crisis, a bifurcation by which cultural choice was demanded between fealty to the party of order or insurrectionary semiotic praxis. In the United States, if you were white and loaded and could tear yourself away from listening to Fleetwood Mac’s catastrophic LP Rumors for three hours you were most likely either watching Star Wars or waiting in line to watch Star Wars. I know you think this is an empty and raunchy satire. Actually, like every other white and wealthy person born between 1958 and now I’m deeply, disarmingly, madly in love with Star Wars. Rumors too.

I would never hold hands with a pig.
But as a vitamin-deprived crackerlet,
my rearers were obsessed with a symbolic
play in which the little stubs hanging off
my palms were pigs. Doing typical pig shit too.
Going to the market. Gumming roast beef.
Slurping trash out of a trough like it was lamb
kidneys in shallot sauce. I’m not above seasoning
my own shapeless chemical dinners with a
little pork product. Inhaling sodium ennui glutamate.
Listening to the lachrymose squeals of an angered
Kardashian, luving its peal across the bereft
orchard of my machinery. But I am going to
call a pig a fucking pig. This blonde Franz-type
stalks the halls of my office building.
He nods up with his whole cleft so I can see
the breezy blonde hairs inside his snout shake.
Sparkling honky eyes. He licks his lips
spying spine. Hot lard for a cold
baton. Wild boars still roam the woods
of Marin, but in the streets of Athens
all you can see are pigs. Saying something sort of
shitty to a garbage collector. I got a ticket for smoking
on campus and the pig thanked me, handing
over carbon copy. Smudging my enduring
dermal affability. I grabbed his tail and pulled
it Botox taut. That’s not
compost staining the wrinkles in my fingers, pig.
It’s what degrades this beautiful salt-lick
I put clothes on every day: white but pig-hating,
full of lovable rancor. It smells a little yesterday.
Backdated fish. Big potato. What goes
in the garbage. Cognac for pigs.


﻿
﻿
Following Brandon's raucous reading, Jocelyn Saidenberg began hers by saying that after Brandon's performance, she felt like the "straight man," though she is neither. The work Jocelyn read from is new; in "Silent Resistance," she writes through/with Melville's Bartleby the Scrivener, attempting to occupy that "impossible subject position" that is Bartleby's. We heard several sections from this new project and the writing throughout is precise, the syntax elastic, abject, and exquisite. I look forward to reading more from this tantalizing project.

On the Dead Letter Branch, or, Sheep


At dusk, the gray zone of my disappearance, drugged by a still unknown drug, the hour that mourns the loss of day, cast down, but I go, neither melancholic nor stupid, I am the dawn, faceless possibility, impersonal, slipping beyond my form into the dazzling light of a world that says “no” to depth. At this moment, this dusk that is dawn, I am named as such, named as one. I had been given notice, as all subordinate clerks, myself named one, were given notice. After scores of years of reading through undeliverable correspondence, no one more suited to this avocation than I, vested with that authority to open and read the dead letters, I am to be removed. Not a rumor, not whispered speculation, is yet my sudden removal, due to an incoming administration, all posts, save the ex-clergy, are being removed. I would have rather to have declined their offer, but they have already asked that my keys be returned. I am the most trustworthy dead letter man handling the dead letters, yet I am to be removed, most likely today.

I was hired for my ability to decipher handwriting. To sound out the correct intention, to sleuth a destination. Stiejt Kanedeka means State of Connecticut. I could smell it. The rest we fed to the flames. Faithfully I have sorted through them, lived through them, the unreceived, prone and silent, I have worked, burned cart loads yearly. By nature and misfortune, prone to a pallid hopelessness. Within I have found rings, infolded in paper—the finger it was meant for molders in a grave. I have found bank notes, sent as swift charity to whom it would not relieve, who nor eats nor hungers anymore. I have read pardon for those who died despairing, hope for those who died unhoping, good tidings for those who died stifled by unrelieved calamities. I have read just enough, nor more than necessary. A business so fitted to me. I have sorted the mail of the bereft, errands of life who speed yet faster to death. My surrogate hand unsealing, tender and mild and serene, continually. Now suddenly, I am to be removed from circulation. This my home, my eternal dusk, invaded only by shadows, I am cast out. Where, as formless, who, as unrecognizable, when, am I capable of such exit, how to break the bonds of such weariness, tiredness, this silent disaster, a figure without form. This event will have happened. I repeat: I am to leave my post in the Dead Letter Office in Washington. I am to leave as if possible to publish myself, even as an anonymous dead letter man, as an instinct, unformed and atmospheric, as if I come or go from without, as if this could be thought, formed. I am as weather shadow cloud, and as weather shadow cloud, I depart.
Posted by Robin Tremblay-McGaw at 9:10 PM No comments:

Celebrating the Re-Publication of Bruce Boone's The Truth About Ted!

Dear Readers---Lucky You! Now, thanks to Steve Orth and Lindsey Bolt of Summer BF Press, you too can have your very own copy of Bruce Boone's The Truth About Ted, complete with a new cover by Colter Jacobsen. You can buy a copy from them, here.

On Friday, July 29th, a crowd of Bay Area writers and Bruce Boone enthusiasts gathered in an elegant historic home on Guerrero Street as we fêted Bruce and he read the entirety of The Truth About Ted, a new narrative text originally published in 1984 by exempli gratia of Berkeley. 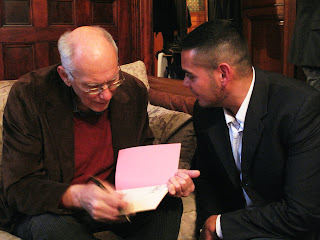 I am a big fan of this slender but significant text. Years ago when I worked at Meyer Boswell Books on Mission Street, I was lucky enough to stumble upon an original copy at the very cool store next door, Bolerium Books. Thank you Bolerium Books!  The Truth About Ted performs a multitude of storytellings, desires, interpretations, readings and misreadings. It is poignant, smart, and funny. If  you are interested, you can read a short critical piece on it here.


Thanks to Bruce's friend Gerard Koskovich (about whom you can find out more here), you can watch this short video of Bruce reading.

Congratulations Bruce and thank you Lindsey and Steve.
Posted by Robin Tremblay-McGaw at 8:02 AM No comments: