The Mass of People & Letters for Poets 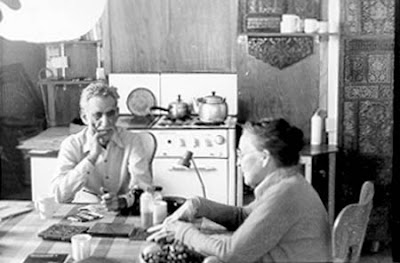 Just borrowed from the library a copy of The Selected Letters of George Oppen, edited by Rachel Blau DuPlessis and randomly opened upon this:

"I should imagine that in any really terrible economic emergency we would pretty much start where the New Deal left off--managers, administrators, social workers, engineers being called to Washington--even drafted--something like a war emergency. Disregard of private ownership of big industry where necessary---an enforced assumption that the welfare of the mass of the people was the primary concern of government, though probably with no theorizing about 'Working Class rule'----and no such thing in actuality, either.

And yet this isn't too realistic a picture either. Or at least is far from a terminal point in the 'class struggle.' Because there would still be many opposing alternatives--including war as an alternative to economic breakdown. I am more or less assuming the increasing obvious impossibility of war because of the newly discovered perishability of the planet.

I don't mean that it would all be arranged so smoothly and calmly and by the powers that be. But I cannot imagine anything even remotely like the Russian model in the U.S. Neither can I imagine that history will just sort of end with the present best of all possible worlds (17)."

DuPlessis underscores the importance of letters with regard to Oppen's poetry. What she says is worth excerpting and noting here not only in reference to Oppen but as a way to consider the letter as form generally, and especially for writers, particularly poets.

"Because many of the issues, stances, locutions, feelings raised in Oppen's poetry occur in the interactive arena of letters, Oppen's correspondence is an important part of his oeuvre. Letters are both intimate and declarative--a curious mixture of semiprivate and semipublic utterance; letters come from need, and there is an immediacy of provocation and response to them which helps dramatize ideas and personalize social and moral trends. The controlled dialogue which letters provide--a forum for hearing oneself, as well as for conversation with others--was crucial to the composition process of a number of Oppen's works. Letters offer both a mirror of what thought one did not see until it was written and an arena for self-explanation and gloss, important because Oppen's writing hinged on self-knowledge: 'in my life to know// what I have said to myself' (CP 242). Letters also provide a place for authority and judgement made less pontifical, more 'essaying,' by virtue of the possibilities of debate and response. Oppen's delight at 'the pleasure of being heard,/ the pleasure / of companionship (CP 142) was announced first in a letter; the recipient, Charles Tomlinson, set that statement as a poem, which Oppen then took back (UCSC 16, 11, 12). While not repeated in such a graphic form again, this collaborative interaction whose subject is precisely the ideal interaction of speaker and listener summarizes the dual functions for Oppen's correspondence: at once to create a dialogue and audience (vii-viii).

For another sweet photo of the Oppens, click here.
Posted by Robin Tremblay-McGaw at 5:17 PM No comments: 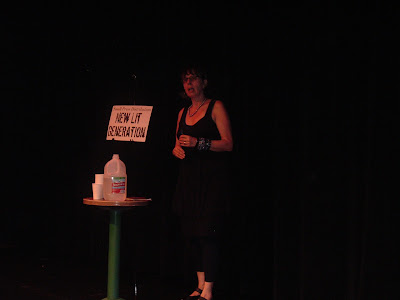 Laura Moriarty, accompanied by fan and an array of bracelets in various hues of blue, hosted the evening's events.

The House was Full and Hot and the Audience Vibrated with Energy at the Marsh Theater last night when Kaila Wilkey, a student at Berkeley Technology Academy, 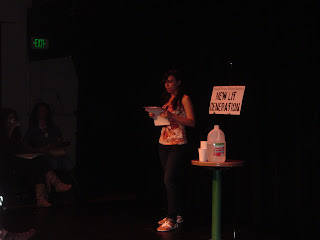 Ashley Redfield, a student at Oakland School of the Arts, 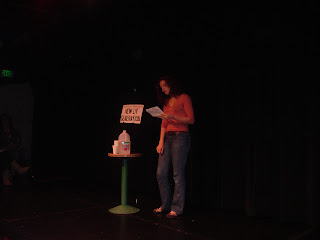 and Alex Tremblay-McGaw, an 8th grader at James Lick Middle School in the Spanish Immersion Program, 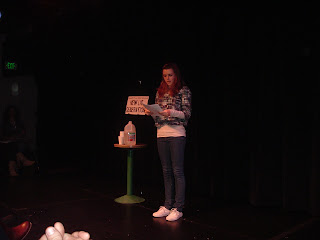 all read their poems.

The young people were followed up by not-quite-so-young writers:

Kiala Givehand who lives in Oakland and is working on her MFA at Mills College;

Kaya Oakes, author of Slanted and Enchanted: The Evolution of Indie Culture, and a poetry collection, Telegraph;

Cedar Sigo, whose book Selected Writings we took home, (having received it in exchange for a poem written on the spot). Sigo also has a book called Expensive Magic. Alex liked his work a lot.

Barbara Jane Reyes, author of Poeta en San Francisco, a book that is large and expansive in its reach and poetics. Her third book, Diwata, is due out next year.
Posted by Robin Tremblay-McGaw at 2:44 PM No comments: 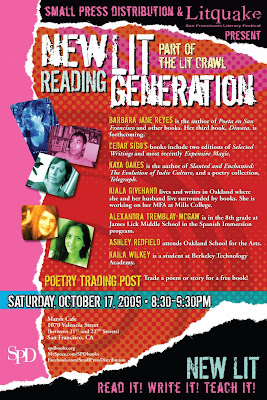 at the Marsh Cafe
1070 Valencia Street
San Francisco
Posted by Robin Tremblay-McGaw at 12:54 PM No comments: 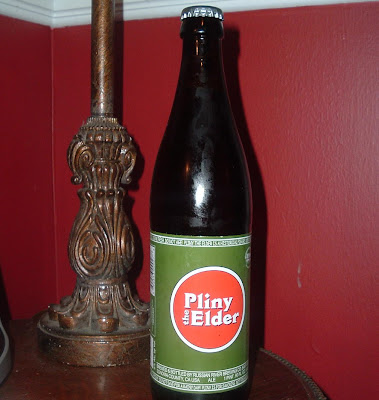 I have been revising a series of poem/letters called The Melmoth Letters. This project was inspired by Jim Brashear's intertextual loving and lashing of Charles Maturin's Melmoth the Wanderer, an 1820 Gothic novel, often considered to be the last of the Gothic novels. It is not taught very often, even in Gothic Fiction courses. It is a sprawling and inconsistent fabulous text. Jim's San Francisco State University MFA thesis is a book called go little book--one that needs to be published! One section of it is entitled "Three Gothic Novels." Part 1 of this series is entitled "The Proportion between Offenses," and contains letters interspersed with prose blocks. The letters are from Melmoth and addressed to Maturin. It is headed by an epigraph from Pliny:

Apparebat eidolon senex, macie et senie confectus.
A phantom appeared in the form of an old man, consumed by thinness and age" from Letters (VII. xxvii. 5)

When I ran into Rainbow Grocery yesterday as I was making my way past one of the coolers (headed, I confess, to the cheese counter where there are often tasty exquisite cheese samples--though not yesterday!)my eye fell upon this bottle of Russian River beer called Pliny the Elder. How could I not buy it?

The bottle explains itself:

Pliny the Elder, born in 23 A.D. was a Roman naturalist, scholar, historian, traveler, officer, and writer. Pliny and his contemporaries created the original botanical name for hops, Lupus Salictarius meaning wolf among scrubs. Hop vines, at that time, grew wild among willows,likened to wolves roaming wild in the forest. Pliny the Elder died in 79 A.D. while saving people during the eruption of Mount Vesuvius. He was immortalized by his nephew, Pliny the Younger, who continued his uncle's legacy by documenting much of what his uncle experienced during the eruption of Mount Vesuvius. This beer is an homage to the man who discovered hops and perished while being a humanitarian.

I can't wait to taste it.

But what might all of this have to do with Melmoth? Or Maturin (see this portrait of him stolen from Wikipedia...)? 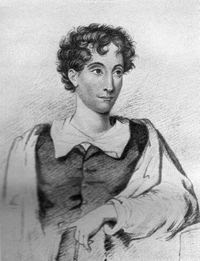 Maturin's book opens with the death of an old miser who feels he's being robbed at every turn. So, there is a thematic connection to Pliny's old man emaciated by age. While doing a search in JSTOR, a really useful historical full text database of scholarly articles, I discovered an article in The Classical Review from 1916 that reviews William Melmoth's translation of Pliny, which had just been revised by a (Miss!)W.M.L. Hutchinson, for publication as part of The Loeb Classical Library. So, here is a connection between another Melmoth and Pliny. The review notes the excessive wordiness of Melmoth's translation, lamenting that the "present age sets up different standards of translation from the eighteenth century and dislikes to find little words and little phrases of an original swollen to mammothlike proportions..." (200)

How delicious! Jim's project and my own play with these swelling and mammothlike proportions. And it would seem that Brandon Brown's Catullus translations have their own deliciously swollen nature.

Here is a little taste of a section from Jim's "The Proportion between Offenses":

That mingled sensation of awe quitted him to attend a dying uncle on whom his hopes for independence chiefly rested. Nurse, domestic, and parent snapped themselves when he pleased. The means to conciliate was the orphan son of a younger brother, whose small property holds the very threads of existence in his hands-- it may prolong his infancy in the blue chamber of the dwelling. The uncle was rich, unmarried, and old.

The beauty of the country fell like blows, fast and heavy on his mind. He roused himself from dwelling on many painful thoughts and sat up in the mail. It was the county Wicklow through which he consulted his watch, as the future looked out on the malignant prospect. Then he thought that the strange reports, concerning the cause of the secluded life his uncle had led for so many years, receded into his own dependent state. Some borrowed from the past his uncle's caprice and moroseness.

Though he was striking against the piles of books, globes, old newspapers, wig blocks, tobacco pipes, and snuff canisters, not to mention certain hidden rat-traps and moldy books beneath the chairs, he was never permitted to approach them, when the mind is thus active in calling over invaders, and no wonder the conquest is soon completed (66).

How well it all swells. I'll let you know, Readers, how it swills.
Posted by Robin Tremblay-McGaw at 10:08 AM No comments:

Parting the Nightgown of the Poem

In mini-celebration, I am posting these two slender but full lines from Mullen's 1991 Tender Buttons book, Trimmings.


Below is a brief description of these lines from writing I've done on Mullen's work:

The two lines contain the same number of words, retain the consonants within each, and change only vowels in particular words. In this regard, they suggest a kind of stasis. Mullen has set up a field of restriction, something akin to a parsimony principle in which there is a great deal of constraint and limited mobility.


In Mullen’s two lines above, the only textual difference or movement occurring consists in changes of vowels. Yet, so much else is generated out of so seemingly an insignificant change. Each line begins and ends with the same words : “night” and “gown.” Together these two separate words make one word: nightgown. Mullen opens up or parts the nightgown of this poem. The lines reveal what happens in the space between “night” and “gown.” In the first line night is linked to its coming into being (“sun down”) and its emblems–“moon,” and “star.” In the second line night and the activities that occur in or during it are eroticized as “moon” is transmuted into “moan,” “star” into “stir,” and “sun” into “sin.” Furthermore, the lines document the passage of time, though the first might be said to chart a disordered movement of time as the line begins with “night” and then moves into dusk. The second line is occupied with the passage from night to “dawn” as the ‘o” of “down” in the first line is translated in the second into the “a” of “dawn.” It is not insignificant that the movement of the lines occurs undercover of not only linguistic restriction, but also night and its darkness. Out of extreme restriction and delimitation, the lines instantiate the passage of time both formally and in their content (in the time it takes to read them as well as the way they register or figure a movement from dusk to dawn) while they also generate an erotic and transgressive excess from “sun” to “sin” and in the strangeness of the movement from “night” to “dusk.”
Posted by Robin Tremblay-McGaw at 10:12 AM No comments: