On not just any Sunday, but yesterday, the 6th of December, California College of the Art's Timken Hall was filled beyond capacity. Oversold.

After being introduced by CCA MFA student Rachel Kass, Karen Green, whose recent book Bough Down has garnered many accolades, including winner of The Believer Poetry Award 2013, sat cross-legged on a plastic chair on stage and read, beginning with this:


The doctor wears his pink shirt with the sleeves rolled up. I see his flaws clearly before he gives me the shot which will put me to sleep until after the holidays. He is making a mercy call, and the needle is part of my invention. Pink is a new color I am seeing.

The Googled pills are all different colors.

I don’t know how not to imagine submission, even after all this. Someone says I need to be contained but I think he means constrained. I let him take away my sight and my hearing while he applies pressure in another language. He is very kind about assessing my needs, but there is a strident protestor type inside who recoils and starts assembling contempt and mirrors. 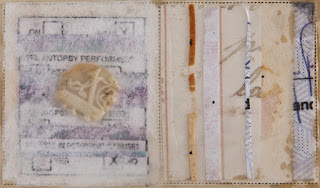 Green's text is punctuated by her collages like the one above. She didn't include images of these at the reading, but I wish she would have, particularly since both Green and Rankine's books--though in different fashions--are engaged with text and images. You can see more of Green's poem here at BOMB magazine.  About Green's book in the Los Angeles Review of Books Maggie Nelson has written:

Karen Green’s new — and incredibly, her first — book Bough Down, from Siglio Press, is an astonishment. It is one of the most moving, strange, original, harrowing, and beautiful documents of grief and reckoning I’ve read. The book consists of a series of prose poems, or individuated chunks of poetic prose, interspersed with postage-stamp-sized collages made by Green, who is also a visual artist. Collectively the text bears witness to the 2008 suicide of her husband . . . and its harrowing aftermath for Green. The book feels like an instant classic, but without any of the aggrandizement that can attend such a thing. Instead it is suffused throughout with the dissonant, private richness of the minor, while also managing to be a major achievement.

I am looking forward to reading more of Karen's book.

After Karen, CCA MFA student Melissa Josephine Ramos introduced Claudia Rankine. On-screen, Rankine projected images from her book Citizen: An American Lyric, beginning with David Hammons' "In the Hood," made in 1993 after the LAPD beating of Rodney King; this image graces the cover of Citizen.

She also showed us a photograph of Hammons in New York City as he sold snowballs, which you cold hold and then "feel whiteness melt in your hands."

Opening her reading with the statement that "Citizen came to me through community," Rankine explained how she asked numerous friends to recount an experience when each was doing something ordinary and suddenly something was said that reduced the person to his/her/their race, and racism entered the discourse.

Reading from the first part of Citizen, comprised of some 12 separate sections and anecdotes, Rankine began with:

When you are alone and too tired even to turn on any of your devices, you let yourself linger in a past stacked among pillows. Usually you are nestled under blankets and the house is empty. Sometimes the moon is missing and beyond the window the low, gray ceiling seems approachable. Its dark light dims in degrees depending on the density of clouds and you fall back into that which gets reconstructed as metaphor.


The route is often associative. You smell good. You are twelve attending Sts. Philip and James School on White Plains Road and the girl sitting in the seat behind asks you to lean to the right during exams so she can copy what you have written. Sister Evelyn is in the habit of taping the 100s and the failing grades to the coat closet doors. The girl is Catholic with waist-length brown hair. You can’t remember her name: Mary? Catherine?

You never really speak except for the time she makes her request and later when she tells you you smell good and have features more like a white person. You assume she thinks she is thanking you for letting her cheat and feels better cheating from an almost white person.

Sister Evelyn never figures out your arrangement perhaps because you never turn around to copy Mary Catherine’s answers. Sister Evelyn must think these two girls think a lot alike or she cares less about cheating and more about humiliation or she never actually saw you sitting there (5-6).

Displaying a number of other images from her book, Claudia talked about where in the book they appear and what she was interested in doing with them. Among these were Michael David Murphy's "Jim Crow Rd," a screen shot from Hennessy Youngman's ART THOUGHTZ: How to be a Successful Black Artist," photos of Caroline Wozniacki imitating Serena Williams, and from the Hulton Archives at the Getty Museum, the photograph, "Public Lynching" from August 1930 (pictured above), and others. About the latter image, Rankine said that the Getty initially was somewhat reluctant to let her use it but once permission was granted and Rankine asked to alter the image, to remove the hanging bodies, they were somewhat relieved since one of their concerns had been that the image would be an incitement to re-enactment. Rankine noted that she is interested in the crowd of onlookers, the spectators, since "they are us," pointing out that violence happens because we let it and because we benefit from it.
Rankine read from a variety of sections of her book and then, because she needed to catch an early plane, she left us to watch a draft of a short film she is working on with her husband John Lucas; the piece is a meditation and deconstruction/interrogation of beauty as whiteness, by way of, among other things, various advertisements for skin lightening products from a diverse array of countries.
Claudia Rankine has a deep and pleasing reading voice and I enjoyed hearing her read and discuss her work and its relationship to the images in her text. I included the first section of Citizen in my Art Culture and Social Justice class at Santa Clara University this fall and I've been thrilled to be working with this text, witnessing how it engages students, particularly as we've been in conversation about how Rankine's text works, how it uses form--not just its complex deployment of pronouns, shifters that engage and implicate the reader, but also, in this first section, its attention to setting, to the diverse array of public and private, urban and suburban spaces in which racism is enacted. We noticed how victims and bystanders, perpetrators and witnesses in these scenarios are inescapably bound together in these scenes that reveal each of us is playing a part. These poems, in other words, make textual and perform in their formal architectures, that crowd beneath the tree in 1930. Only it is 2015 and there are crowds on subways, in Starbucks, in front of storefronts in Ferguson, in the streets, and in these crowds people of color are the narrators. Sometimes the crowd is a crowd of two. These are crowds that are doing a variety of things and are comprised of a variety of people--sometimes standing by, sometimes protesting, sometimes unaware, sometimes speaking and not hearing and sometimes hearing and pretending not to have spoken. Claudia Rankine makes legible and audible spaces of discomfort, because, as she said yesterday in Timken Hall, the space of discomfort is a more civil space, maybe she said more civic space, than what we've been living in--that space that pretends we are a post-racial society, that space in which white imagination projects any number of fantasies onto the black subject become once again, object; that space in which, as one of the pieces and narrators in Citizen frames it: "Americans battle between the 'historical self' and the 'self self'" (14).
Other xpoetics posts regarding Citizen include:
Claudia Rankine's Citizen: An American Lyric
Notes: Fences, Stop Signs, Shifters, or the Conditions of Community

﻿
Posted by Robin Tremblay-McGaw at 4:35 PM No comments: