In October Emily Abendroth and I were at a Bard meeting and we shared a room at a YMCA camp in the Catskills when the trees around us had reached their zenith of flame and color. Emily had brought along a copy of Claudia Rankine's book Citizen: An American Lyric. Its opening immediately engages:


When you are alone and too tired even to turn on any of your devices, you let yourself linger in a past stacked among your pillows. Usually you are nestled under blankets and the house is empty. Sometimes the moon is missing and beyond the windows the low, gray ceiling seems approachable. Its dark light dims in degrees depending on the density of clouds and you fall back into that which gets reconstructed as metaphor (5).


Hailing the reader with its deployment of the second person, the writing subtly and fairly rapidly shifts away from what might first appear to be a luxurious, even narcissistic meditation--"you let yourself linger"--to a series of traumatic anecdotes, conversations, and experiences. For example:

At the end of a brief phone conversation, you tell the manager you are speaking with that you will come by his office to sign the form. When you arrive and announce yourself, he blurts out, I didn't know you were black!


I didn't mean to say that, he then says.


You didn't mean to say that aloud.


Your transaction goes swiftly after that (44).

The rain this morning pours from the gutters and everywhere else it is lost in the trees. You need your glasses to single out what you know is there because doubt is inexorable; you put on your glasses. The trees, their bark, their leaves, even the dead ones, are more vibrant wet. Yes, and its raining. Each moment is like this--before it can be known, categorized as similar to another thing and dismissed, it has to be experienced, it has to be seen. What did he just say? Did she really just say that? Did I hear what I think I heard? Did that just come out of my mouth, his mouth, your mouth? The moment stinks. Still you want to stop looking at the trees. You want to walk out and stand among them. And as light as the rain seems, it still rains down on you (9).


A friend argues that Americans battle between the "historical self" and the "self self." By this she means you mostly interact as friends with mutual interest and, for the most part, compatible personalities; however, sometimes your historical selves, her white self and your black self, or your white self and her black self, arrive with the full force of your American positioning. Then you are standing face-to-face in seconds that wipe the affable smiles right from your mouths. What did you say? Instantaneously your attachment seems fragile, tenuous, subject to any transgression of your historical self. And though your joined personal histories are supposed to save you from the misunderstandings, they usually cause you to understand all too well what is meant (14).


While the poetry sometimes makes use of the third and on occasion first person "I" narration, Rankine's writing powerfully employs the second person to convey discrete, individual experiences that are also all too frighteningly frequent, and therefore common, in common, shared by many. While the particulars of an encounter revealing racism at work may vary in their specific details, the shape of these encounters, what they reveal is markedly the same--namely,what it is like to live in a thoroughly racialized and racist society.

At the close of her book, Rankine thanks a large number of people who "generously shared their stories" (169), suggesting that her research and writing process included consulting friends and colleagues and incorporating their experiences into the text. The second person renders these stories in such a way that the reader is interpellated and implicated; emphatically the you of the text is at once discretely singular and plural.

from "Stop-and-Frisk"
a script for Situation video created in collaboration with John Lucas:


The subtitle of Rankine's book is "An American Lyric."

While any subject, any "I," is a subject of shattering, and the lyric itself is predicated on this split subjectivity--the "I" of any poem always a discursive construction--Rankine's writing in Citizen marks the myriad spoken and unspoken, overt and covert constructed ways race and racism traverse, shape, and undergird our relations.  Her careful deployment of pronouns reveals the emptiness of the "I" who cannot see others, or the discrepant fissure in social relations in which a black American "I" is read by others as a you, nameless, less than human, an indistinguishable object. At the same time, the collective you marks the communal--in all of its potential beauty and many horrors. I guess what I mean to say is Claudia Rankine elaborates the plenitude and the abyss every pronoun marks, demonstrating the ways race is a force of "undoing" and "doing" in a thoroughly racialized society, a democracy founded and foundering on its historically problematic construction of citizenship.


When a man says "I can't breathe," who does not hear the "I," see the human being struggling to breathe? What is it that some people see when they look at a black man or woman? Darren Wilson described Michael Brown as “look[ing] like a demon” or "Hulk Hogan" (McCoy).

Claudia Rankine's book Citizen exposes the ugly truth at the heart of the histories of citizens and citizenship.

For every citizen there is a non-citizen, an other that makes possible the category of "citizen." From The Oxford English Dictionary:

The writing throughout Citizen moves with a quiet, deliberative pace, one that is adept at suddenly turning a corner and revealing the precipice, one that the reader realizes is never suddenly there, but rather always present, if sometimes, less conspicuous.

Sometimes "I" is supposed to hold what is not there until it is. Then what is comes apart the closer you are to it.


This makes the first person a symbol for something.


The pronoun barely holding the person together  (71).

I couldn't put this book down. I want to hold this book up in the air.


Posted by Robin Tremblay-McGaw at 3:27 PM No comments:

A Hearty Congratulations to the Bay Area's own Brandon Brown who recently received a National Endowment for the Arts Creative Writing Fellowship! 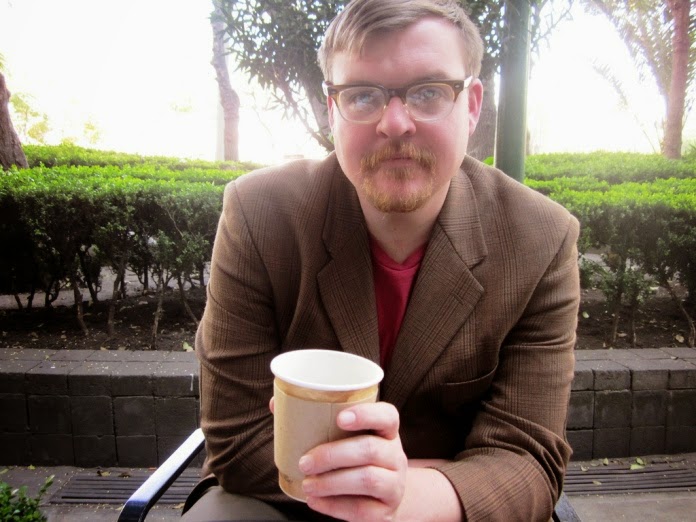 Brandon Brown is the author of four books of poetry, most recently Top 40 (Roof) and the forthcoming Shadow Lanka (Big Lucks).  His poetry and prose have appeared recently or will appear soon in Open Space, Art Practical, Maggy, Elderly, Berkeley Poetry Review, and Where Eagles Dare.  He is an editor at Krupskaya, occasionally publishes small press materials under the imprint OMG!, and helps curate the Heart’s Desire reading series at the Bay Area Public School.


I have always admired the way Brandon's writing moves across multiple linguistic registers from pop culture to the classics. It does so with wit and linguistic and rhetorical flair. It is capable of bragging and being humble simultaneously. In its crossing and ability to register feeling, capaciously and often with a punch, his writing reminds me of Frank O'Hara's.


You believe the writing when it claims: "Dunno, but I do feel these feelings and feel torn apart" (The Poems of Gaius Valerius Catullus 156).


Here is section 50 from Brandon's poem "Sparrow" in The Poems of Gaius Valerius Catullus from Krupskaya:


Dear God, it's me, Catullus, except this time I'm talking to you as a virgin, in stanzas of three glyconics followed by a pherecratean, a metrical system found in the work of Anacreon (6th century BCE). Each stanza observes synaphaea, or 'fastening together,' and each glyconic ends with a syllable that is long. Halfway through the poem I start to talk about your name, and how powerful you are, and how you're the moon and the vegetables I eat and are really old, and sui generis, so spritely, so gentle.


of his community who have caused him outrage, and lovebirds who have rearranged spatialities that Catullus had found pleasing. I have belabored this because it gives me an opportunity to talk about the process of translation in this book called The Poems of Gaius Valerius Catullus. Translation as I understand it involves a preceding writing, a proceeding writing--in between is the body that translates. The preceding writing is absorbed by the body of the translator in the act of reading. And when the translator writes something down which proceeds from the act of reading and the preceding writing, that is called "translation." However, far from idealizing repetition, this translation

So many sections of this poem hang in medias res, inviting the reader to turn the page. Get the book to find out where the next section takes you.


Brandon has kindly shared with us the poem he submitted to the NEA Committee. Enjoy!

The Last Words of Gerard Manley Hopkins by Brandon Brown.

from The Contemporary Step by Isabelle Garron, Translated from the French by Eléna Rivera


..the woman without writing would advance

—such is the trap     . right up to preferring an accident
--Isabelle Garron

Isabelle Garron is a poet, critic and associate professor at Institute Mines Telecom. She has published three volumes of poetry at Flammarion: Face devant contre, 2002 (translated by Sarah Riggs and published by Litmus Press as Face Before Against, 2008); Qu'il Faille, 2007; and Corps fut, 2011). She is currently working on a translation of Way by Leslie Scalapino with the poet and editor Tracy Grinnell, and wrote an essay  "des cercles au crayon,” for a new anthology of Anne Marie Albiach's complete work "Cinq le choeur” just published by Flammarion.


Eléna Rivera won the 2010 Robert Fagles prize for her translation of Bernard Noël's The Rest of the Voyage (Graywolf Press, 2011) and is a recipient of a 2010 National Endowment for the Arts Literature Fellowship in Translation. She has also translated three of Isabelle Baladine Howald’s books, Parting Movement, Constantly Prevented (Oystercatcher Press, 2014) Secret of Breath (Burning Deck, 2009) and The Pain of Returning (Mindmade Books 2012).