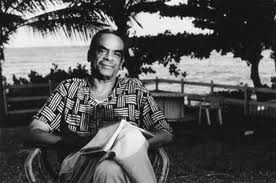 From Glissant's Poetics of Relations:

However, and this is an immense paradox, the great founding books of communities the Old Testament, the Iliad, the Odyssey, the Chansons de Geste, the Islandic Sagas, the Aeneid, or the African epics, were all books about exile and often about errantry. This epic literature is amazingly prophetic. It tells of the community, but, through relating the community's apparent failure or in any case its being surpassed, it tells of errantry as a temptation (the desire to go against the root) and, frequently, actually experienced. Within the collective books concerning the sacred and the notion of history lies the germ of the exact opposite of what they so loudly proclaim. When the very idea of territory becomes relative, nuances appear in the legitimacy of territorial possession. These are books about the birth of collective consciousness, but they also introduce the unrest and suspense that allow the individual to discover himself there, whenever he himself becomes the issue. The Greek victory in the Iliad depends on trickery; Ulysses returns from his Odyssey and is recognized only by his dog; the Old Testament David bears the stain of adultery and murder; the Chanson de Roland is the  chronicle of a defeat; the characters in the Sagas are branded by an unstemmable fate, and so forth. These books are the beginning of something entirely different from massive, dogmatic, and totalitarian certainty (despite the religious uses to which they will be put). These books are of errantry, going beyond the pursuits and triumphs of rootedness required by the evolution of history.

Some of these books are devoted entirely to the supreme errantry, as in the Egyptian Book of the Dead. The very book whose function is to consecrate an intransigent community is already a compromise, qualifying its triumph with revelatory wanderings.

In both L'Intention poétique (Poetic Invention) and Le Discours antillais (Caribbean Discourse)--of which the present work is a reconstituted echo or a spiral retelling--I approached this dimension of epic literature. I began wondering if we did not still need such founding works today, ones that would use a similar dialectics of rerouting, asserting, for example, political strength but, simultaneously, the rhizome of a multiple relationship with the Other and basing every community's reasons for existence on a modern form of the sacred, which would be, all in all, a Poetics of Relation .


....The horizon seaweed is interwoven in variations of gray tinged blue with black, where space increases. Their fern makes a rain that does not peel away from the heat of the sky. With the dove gray of thought you touch a tousle of vegetation, a cry of  morne and red earth. Glowing fires scarcely sparked by dizziness. Rainshower motionless. Dwindling echoses. A tree trunk silvers against the rim of the sun, stubbornness, stiff but melting. Call the keepers of silence with their feet in the river. Call the river that used to spill over the rocks.--As for myself, I have listened to the pulse of these hot spots. I have bathed there beside friends, attentive to the volcano's drums. We have stood bent against the wind without falling. One lone bay; whatever name it had evaporated. Also endeavouring to point out this blue tinge to everything...--Its sun strolls by, in the savanna's silver shuddering and the ocre smell of the hounded earth (209).

A video of a Glissant interview  ici: http://www.dailymotion.com/video/x81q9n_edouard-glissant_news
Posted by Robin Tremblay-McGaw at 11:10 AM No comments: