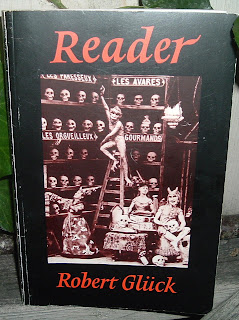 Check out a post on reading by moi on the Language and Thinking blog.....HERE
Posted by Robin Tremblay-McGaw at 10:15 AM No comments:

This weekend Small Press Traffic held it's Tenth Annual Poets Theater event.  While the dailiness of daily life and an attempt to put the lid on a cold kept me away from Friday night's events, I had the pleasure of selling tickets, pouring drinks, and enjoying the second evening's dynamic selection of performances.

But first, here's the line-up for Friday January 28th:

"You wanna see Cultural Marketers--doing it?"

Perhaps make
a hinge
picture.
(folding yardstick, book...)
develop
the principle of hinge
in the displacements
1st in the plane 2nd in space

Written and directed by Brent Cunningham

The actors for this improvisatory play will be selected from the audience at the start of the evening by a chance procedure. It features plays-within-plays stacked like Russian nesting dolls. In the end, everyone dies.

Goethe wrote, "Tell it to no one, tell it only to the wise"--an admonition of sorts that is repeated via letters from squirrels to two doomed lovers in Ingeborg Bachmann's radio drama, "The Good God of Manhattan" (1958). This piece, "Tell Only One," should look like a curtain splashed in mauve variations and described many times, eventually uncovering a singular, bare face that is wise, if wise means hoping we won't expect it, it being what faces tell when they are reading messages that say don't tell anyone.

I believe that Carol Mirakove and Jen Benka provided crazy antics before the plays and at intermission!

On Saturday evening, January 29th, we were treated to the following:

Ascidian Play chronicles the existential preoccupations of three larval Ascidians contemplating what type of Ascidians they will become as they mature. This play is one in a collection of plays about the misadventures of marine invertebrates called Invertebrate Plays.

"Remember, we're still larval, be careful what you say!"

This play was finely staged with hippy VW bus-driving-guppy-gurgling larvae on the road.

The Photographers Photo Detritus Without a Camera
Written and directed by Ariel Goldberg
This is all for Sale with models Jackqueline Frost, Ted Rees, Matt Runkle, and Cassie Thornton

Immerse yourself in a fusion lecture liquidation of accessories that keep cameras and pictures flowing rapidly. What do photo objects become when accumulated and outdated--what do you become owning these objects?

The Salesperson/Models did the runway strut with their unwieldy collections of frames, packaging and other photographic detritus while Goldberg narrated the story of these materials. On screen, a slideshow. Remember, this is all for sale!

This piece called for audience participation--prompts provided on-screen via the old-fashioned (!) technology of the overhead projector, drinks were requested and proffered, sonic pleasures and narrations passed back and forth.

From Naked Translations: "Entre chien et loup is a multi-layered expression. It is used to describe a specific time of day, just before night, when the light is so dim you can't distinguish a dog from a wolf. However, it's not all about levels of light. It also expresses that limit between the familiar, the comfortable versus the unknown and the dangerous (or between the domestic and the wild). It is an uncertain threshold between hope and fear."

Cecil's play featured excellent wolf masks and great atmosphere. Marcella, a white girl, had stories to tell, questions to ask, issues of race and gender to probe, while the wolves prowled and paced about a park-like setting (a park bench on stage). One of the wolves played a guitar and sang. A hapless, monotone man happens upon the scene and there is screaming. Loved it.

I Confess! An Adaptation of the Confessions of Saint Augustine
written and directed by David Brazil and Evan Kennedy
Costume Designer for Ms. Bellamy (who played an angel decked out in wings and halo courtesy of a shower head, pole, and toiletry container/apparatus ): Matt Gordon

This play was a delight--the writing both funny and beautiful. The ensemble of actors really fed off of one another. I've just written a little short thing about Augustine's Confessions so it was fun to see what David did with the material. Brazil narrated Augustine's life while Kennedy in silver sneakers was dazzling as the Bad Augustine. Lindsey Boldt and others a great punky band of debauchees! Cunningham an excellent Manichean. Gluck a fabulously ponderous Ponticianus.

Poets Theater--always a fun evening out. Why would anyone miss it!
Posted by Robin Tremblay-McGaw at 4:02 PM No comments: