from Kora in Hell

Taking pleasure in location, notation, I want to point out that Jupiter and Venus are visible in the Western March sky. 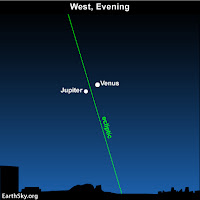 Entirely unrelated, but for the appearance of Jupiter and Venus (along with Mars), here's a strange and fascinating excerpt from William Carlos Williams' Kora in Hell: Improvisations (1920).

Beautiful white corpse of night actually! So the north-west
winds of death are mountain sweet after all! All the troubled
stars are put to bed now:  three bullets from wife's hand     none
kindlier: in the crown, in the nape and one lower: three starlike
holes among a million pocky pores and the moon of your
mouth: Venus, Jupiter, Mars, and all the stars melted forthwith
into this one good white light over the inquest table, --the
traditional moth beating its wings against it -- except there are
two here.  But sweetest are the caresses of the county physician, a
little clumsy perhaps -- mais --! and the Prosecuting Attorney,
Peter Valuzzi and the others, waving green arms of maples to
the tinkling of the earliest ragpicker's bells. Otherwise -- : kindly
stupid hands, kindly coarse voices, infinitely soothing, infinitely
detached, infinitely beside the question, restfully babbling of
how, where, why        and       night is done and the green edge of
yesterday has said all it could        (Imaginations 38).


WCW's Kora in Hell is online here on the Internet Archive.

Posted by Robin Tremblay-McGaw at 2:22 PM No comments:

Small Press Traffic hosted readings by Sara Wintz and Dodie Bellamy on Sunday March 4, 2012 under the aegis of an exploration of the personal. Sara read from work in progress and she has generously shared some of it here:

what is the posture

“who are the models” i find myself txting you late one night
after seeing grown ups act out—slave away at being like children.

in day
in nighttime

beside soft yellow lights that dot the building next door
while sitting on the porch beside crowds drinking heavily
listening to music.

the politicians go on
the suburbs sprawl

women spend hours on the telephone and do their hair to appear more wild
take pictures of themselves in photobooths
with friends or alone
speckled, spotted lights
appear on the walls
like dots on the eyelids of someone who has fainted
then wakes up from a dream to find everything as usual

destroyed by wealth, by the effortless commons
by the fred savage inner monologue
by the fashion binge, the window displays
the plotlines involving mannequins afterhours
the men who watch football or don’t, who do the opposite
as that
the strangeness of being too complicated
to accept it all

they tell me not to ride my bike where i most want to
lest accidentally hit another being while occupying the same strip of civic
engagement (sent from my iphone)
they tell him that it is now socially acceptable to <3 the man that he already has,
does,
continuously
regardless of stated opinions

my boss tells me that she has to work on a weekend, so she’s not working at
work on friday
as i am at the coffeeshop on a friday, underemployed
while the government
in its pinch
has had enough time to come up with a term for us
identify “public health problems”
to extend deadlines
before health care
before taking the time to transform antiquities
to provide occupations beside
grievances
we have already found a way to give up on, kill discovery
doubt galaxies

above the asphalt of this world and streaming
i’m a punk, a rebel, a real vigilante

the people are saying that there is power in numbers
a cause simply able to multiply anywhere
as a result of willing bodies; if able, if eager
to
if happy to say so at the same time

Here are a couple of excerpts:

Ariana Reines sends me a copy of the poem she wrote for The Air We Breathe, an upcoming exhibition that explores same-sex marriage. For the show's catalogue, SFMOMA commissioned poems from George Albon, Will Alexander, John Ashberry, kari edwards, Anne Waldman, Ariana, and collaboratively, Kevin and me. Ariana's poem begins:

Why shouldn't Kevin Killian
Be able to marry the Bolivian
President Evo Morales if he wants to, and still stay married
To Dodie Bellamy too, why not?

Her poem is nine pages long and far-ranging, but what stands out for me is all the cocks and fucking, her poem makes me long to write about cocks and fucking too. I'm sitting up in bed typing on a laptop that's actually on my lap, like in a movie, or like students on the couches in the entranceway to the Writer's Center at CCA, sitting side by side, staring into laptops balanced on thighs, nobody's talking and as night falls no one bothers to turn on the lights. Lit by the glow of their screens, student faces look eerie, like the laptops are vacuuming their brains. If I were still writing The Letters of Mina Harker I'd come up with a few lines about how sexy the laptop is, how I'm pecking words straight into my cunt and fucking the computer is so great, this total Barthesian lapdance my language trembles with desire and then I'd spin out and out, pastiching in movies and a passage from Deleuze with all the verbs changes to fuck--back in the 90s I was so much more impressive, or at least I tried to be, but my cunt isn't going to be fucking anything, I've got a dermatological condition going on down there and no it isn't any STD that Kaiser has a test for, but first they thought it was herpes, and I was sure I got it from the buddhistchakra to chakra like a crazed pinball flip flip flip flip flap flip flap, fucking irresponsible Buddhists I raged, at least I didn't sleep with the Regent I spat out sarcastically, referring to Trungpa Rinpoche's successor, who knowing he was infected with HIV had sex with all these students, most of them straight guys, and passed it on to one of them, who passed it on to his girlfriend before he died. It is not the slumber of reason that fucks monsters, but vigilant and insomniac rationality. In this one tiny thing the buddhist was innocent, I don't have herpes so he couldn't have given it to me, but I hated him when I thought I had it and hating him was much easier than not hating him, hate is like the black of emotions, black swallows all colors so they no longer exist, and so it is with hate---heartbreak and weepiness twirl away in the murk of hate. (135-136)

Ariana writes to me, 'i am sending you a lot of love." As if love were the easiest thing in the world to send. I'm more like my abandoned cat Ted, hiding under the bed, green eyes glowing, not sure if I dare allow you to pet me. On my way to the vet, a gray, boxy van is parked on Harrison, handwritten on its side is EAT PUSSY NOT COW, and I think this is a gift from the  universe to this poem (dare I call this a poem?). EAT PUSSY NOT COW perfectly resonates with Ariana's first book The Cow, an exploration of the violence perpetrated against cow/woman--before I met her she mailed a copy whose cover she spray-painted gold, concealing the slaughterhouse photo, it was like a valentine, her making the world pretty for me. Ariana: Fleshy pink hood over those long lips. The weekend I fucked the buddhist, Ariana was in town giving a reading, but I didn't see her, I was with him. During our sex scenes, I felt her energy in the background, a sheer milky blue veil glittering with gold dust. It's hard to appear normal when you're in the thick of writing. One thing I envy about Ariana is her ability to create a persona where some craziness is taken for granted. I lie to a student I'm meeting and dart to the bathroom to jot down notes for this piece (137-38).

Posted by Robin Tremblay-McGaw at 2:07 PM No comments: