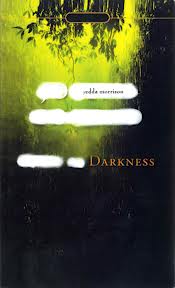 
In early June I ran into the lovely Eléna Rivera and she asked me what poetry I’ve been reading and I told her about Yedda Morrison’s Darkness, a book I’ve had on my desk and near my bed since it came out.  In Darkness, Morrison takes Joseph Conrad’s Heart of Darkness (1899), specifically the Signet Classic mass paperback version and in an interesting détournement, erases much of Conrad’s excessive, soaking wet colonialist and highly gendered discourse and world view, and thus returns the world, the earth, to itself, absent “man” that long stand-in for “the human.”


Conrad’s Marlow explains how as a boy he had “a passion for maps” and eventually “a hankering” to visit “the biggest, the most blank” continent, Africa (223). Marlow admits that it “was not a blank space any more….but [then asserts that it] had become a place of darkness,” where “earth seemed unearthly” (256). Of Conrad’s Heart of Darkness, Chinua Achebe writes that it situates Africa “as a metaphysical battleground devoid of all recognizable humanity, into which the worldly European enters at his peril.” Here Kurtz encounters and becomes part of “The horror! The horror!” Heart of Darkness uses exquisite language to unfurl a problematic tale, one that exemplifies a claim about Marlow’s storytelling style: while


the yarns of seamen have a direct simplicity, the whole meaning of which lies within the shell of a cracked nut[,] …Marlow was not typical (if his propensity to spin yarns be excepted), and to him the meaning of an episode was not inside like a kernel but outside, enveloping the tale which brought it out only as a glow brings out a haze (220).


Heart of Darkness communicates much about the time in which it is written, telling us little about Africa and the Congo and more about “the outside,” the tale and its teller and the world in which he lives, revealing western colonialist fantasies and the deployment of real violence fueled by those fantasies and the lust for power and pillaged resources.
Morrison’s intervention, her erasure, rewrites the novella, unmaking its colonialist, gendered discourse. 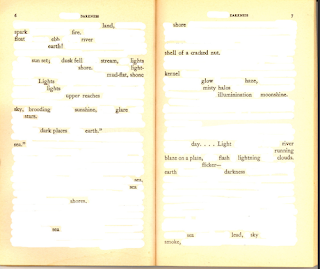 Reader,  something amazing! In her erasure, Morrison has accomplished something akin to what Richard Feynman suggests is the feat performed by the scientific imagination: “One has to have the imagination to think of something that has never been seen before, never been heard before. At the same time the thoughts are restricted in a strait jacket, so to speak, limited by the conditions that come from our knowledge of the way nature really is."
Not unlike the way any of us is both produced and restricted by the language in which we find ourselves, Morrison is constrained by Conrad’s language and also the page of the mass paperback. But she takes this constraint and uses it to reveal the earth as both teeming and still, a place where there is “starred darkness” (108),  “breath
steam                               silence” (90),

Darkness, light, shadow, and ivory, in their dislocation from the initial first-person plural and then third person narrator, are unmoored from their 19th Century cultural frameworks, and come to mean otherwise. But, because Morrison’s source text is Heart of Darkness, this isn’t quite accurate. Her aim doesn’t seem to be to erase the history and context of this language (as if that were possible or, even, desirable), but rather her Darkness both marks these things and to some degree, if momentarily in the space of the pages of her book, returns darkness to the earth as an unvalenced force, a fact.  The text exposes the rich and threatened natural world that is overshadowed, overwritten, run over by human beings. So fraught with its racialized symbolics, Heart of Darkness, has always been about  the white men it is focalized around. Who knew there was so much of the natural world in Conrad’s  text? Morrison’s excision of the human, the specific subjectivity of the white western man (who is, of course, in Conrad’s text juxtaposed with African men and women—both white and black)—underscores the excessive presence of this subjectivity in Heart of Darkness. Morrison’s Darkness offers another possibility, “rose,


But let me be clear, Darkness does not paint a rosy portrait of an earth liberated from the human.
The book closes with an earth hanging in the balance,


offering both a kind of hope (“tranquil” and “flow”) and a glimpse of the unknown future (“overcast” and “immense”).


At the same time, her text makes present our current predicament:


The book is so powerful in part because we cannot help but be reminded of our own rapacious desire for ever more fossil fuels and our disregard for the land that produces them. Additionally, it is impossible to talk about this text and to ignore the recalcitrant ways in which racism persists, particularly in the wake of the murders of TrayVon Martin and Oscar Grant, and so many unnamed others.
I love Morrison's Girl Scout Nation, about which you can read here on xpoetics, yet when I first opened Darkness, I was intrigued but not sure I would find enough there to keep me reading these painterly pages, words in a font that appears sometimes blurry, edged and shadowed from the brush marks of the white-out or liquid paper. But the text has a power, a momentum in the beauty, dare I say, melancholy that emerges in the midst of this “profound stillness,
worn,
hollow,


The earth –“loose of the earth/ earth to pieces”—and all its creatures are , in fact, as always in some places more than others, vanishing, under erasure, on the brink.  It is as if we glimpse it most powerfully precisely at the moment when it seems as if it is slipping away.
Whatever the battles raging right now on Facebook and on the Web and in publications and at parties and readings about conceptual writing, here is a work that locates itself in the company of such writing.  The verso of the title page of Darkness informs us that “pages 3-8 were enacted as a 30-foot wall painting as part of the Not Content event curated by Vanessa Place and Theresa Carmody at Los Angeles Contemporary Exhibitions, Los Angeles, 2010” and that excerpts are included in I’ll Drown My Book, an anthology of women’s conceptual writing.  This text, like M. NourbeSe Philip’s Zong! (mentioned in Bedient's essay cited below) is rich with affect, moving. Each takes source texts that document and enact problematic discourses, discourses that have real and lasting material effects on people, on the planet. These authors use their source texts, perform critical interventions in these texts, and create out of them something wholly new. In its own way, each tells a story that cannot be told. What is earth without human beings? How might it speak? What did the slaves thrown overboard for the purpose of collecting insurance money experience? Who can tell this history? How can not telling tell?

All of this is complicated. And “conceptual poetry” and “the poetry of affect” too are complicated, hard to reduce so that on one side there are “life values” and on the other “emotionally neutral methods.” (see Calvin Bedient’s “Against Conceptualism."). I don’t find much in this glib give and take between Vanessa Place and Ben Fama: Authors on Artists: Vanessa Place Talks with Ben Fama about VanessaPlace, Inc. except careerism. But there’s lots to feel passionately about in work like Zong! and Darkness. And really, we do know that labels and categories are often applied after the fact, and only partially useful, and often misleading.