Just when I wanted it, there on the library's shelf of new books was Aaron Shurin's City Lights book, Citizen. First of all, this is a beautiful book.  The cover art "The Old House" by Su Blackwell is evocative; dark with its illuminated house made from the pages of a book, it is an appropriate choice for a book so heady with the abundant possibilities of language, and full of houses, doorways, stairs, and rooms, though references to sailors, ships, and any number of other things, including Circe and perhaps Odysseus, are also part of the adventure. Opening the book, the reader encounters the endpaper which includes a close-up and cropped version of the house from the cover image, all in a faint gray. You could almost miss it. But don't. 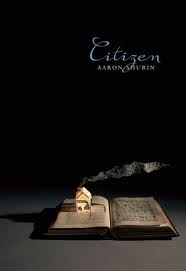 Citizen is divided into three sections: flare, gather and hive. Taken on their own and in consideration of the book's title, one hears, in these words, echos of sexuality and collectivity, maybe, even,  references to the French and more recent (?) revolutions; although the references to places are nameless, they suggest California, the Bay Area, cities with plazas where the weather is "tropical," perhaps in Mexico or in southern France. There is both Spanish and French scattered throughout.


Inside, one encounters prose poems whose language is so pitched, so finely wrought, that it almost spills over the brim of each poem. Here's one, appropriately enough, entitled "Chalice."


Found a trophy in the distant, dumb luck--me, the dowager of chance! A sheep in self's clothing, I threw a cone of silence over my desk and parceled out the hash: dream timber, tales of subsistence, true-believer clothing. I filled the groaning catapult and fired to horizon, a big pairing of what and whatever. In a rain of particulars walls settled against windows--sanctuary fenced posts--reliquary doorjambs--and me slouched in the armchair reading with the radio on. The back stairs turn toward the attic in a flush of oak; something pulled the hidden lever on my cross and made a wheel. Lazily I stroke my stash. Supine giant, somnolent nest: I bury my face in your smoldering lap...my smoldering face in your lap... (12)


Shurin's prose poems contain many references to other writers--his poem "Positioned," reminding the reader of Creeley's "position is where you/ put it" from his poem "The Window."  The closing line of "Tracings" ends with "the century of clouds" and this Bay Area reader hears a murmur of Bruce Boone's book of the same title, a title which also references Apollinaire's line "century of clouds." Then there is "Mortal City" which suggests Jocelyn Saidenberg's book of the same name.

Circe with her magic and ability to transform her enemies into animals haunts some of these poems. In fact, the magic of repetition and resonance, murmurs of other texts, repeated metaphors, phrases, sonic and metric pleasures, permeate Shurin's poems.


Shurin's ear is finely attuned to prosodic potential; each prose poem in Citizen delights in probing the dangerous acrobatic potential of working on the prosodic wire above the wide space of the prose poem.  What a delicious pleasure for readers! At any moment, it might all fall over. And then it doesn't.


In places, one wants to stop and scan the lines, as in the first part of these lines from "The Tipping Point":


"From something love I would split the pit of that something person open, and spit the seeds down a path of perspective lengthening in the shadows.  Tenderness swells; the wolf-teeth retract; a nimbus descends; the glottal stop sings; a totem commands; a totem revives; a totem conceives..." (18).

The line balances on assonance, alliteration, just "like a poet drunk on vowels," as one of the poems asserts.


In this last section with its italicized and pressurized words, i hear an echo of Bob Gluck's four verbs that recur in various guises throughout his book Margery Kempe: "exalt, exasperate, abandon, amaze."  So many communal comminglings, intentional or not.


Here's another from Shurin:


Descending the day with no escalier, though the heat could squeeze you through--I thought a being more than vast--as if the flutters at the edge of sight--as if the downpour in the distance--as if the moister scroll unfurled behind the curtain...Then a luna moth in the paradigm air flew right to a eucalyptus tree on green dust--congruity of mint and menthol--where the coiled air, almost verbal, whisked a wind of powder into a sheath, cool like an emerald, pilfered like an emerald, inward like an emerald...Through what convergence of root and sap did he find himself inside this swollen air? Who was his ally among the overgrown paths--transitory migrations--as the flaps sealed and the columns telescoped and the insects whirred and the buses squealed and his buttons popped and the storefronts flew open while the pine cones burst in the coloratura heat on scales of exhaustion and release? Nothing was his alone, limited to him alone. He perched on a low rock wall in the trumpeting air and licked a glove of sweat from the groove of his lip. More gathered there (16).


There's orchestral and operatic sex all over this book.

Bits of diction, motifs, drift or seep from one poem to the next, as in ""El Deseo" (wish, longing, desire), the phrase "he wanted to" recurs and is elaborated as "he wanted not so much to say as know how to say and what to say," and then migrates to "I want to," crossing into the next poem on the facing page, appearing as "I wanted not so much to say as be said to," "I wanted him to..." (34-35). Here, one is reminded of what it is like to be learning a new language, say Spanish, and also how desire is caught up in the snare of these multiple languages, and in the question of who is saying what to whom, and who and what is being said, called into being this very moment, as mouths open and hands reach out.

There's more to say about this lovely book with its score of dashes and ellipses and italics, and many other pleasures, but not enough time to say it. Instead, go get it. Hold it in your hands. Use your eyes. 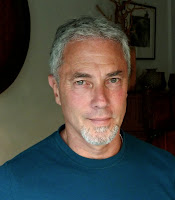 Posted by Robin Tremblay-McGaw at 2:26 PM No comments:

In Memory of Stacy Doris

As many of you know, the writer Stacy Doris died on February 1st. In mourning for her (though I did not know her personally), I give you here some excerpts (sans the diagrams included in this book) from Doris's Cheerleaders Guide to the World: Council Book published by Roof Books  in 2006.

Let them snake lolling
under and quick to strike
reconciled: the people and the cars.

Has its own players but they're
composite due to what keeps
forgotten as if improvised
makeshift like artistry and that
were unending. So even if the filed
has a story: it's infinite a language
of freedom in drivel or as
Laugh1ing M1rrors cries: invent.

We cheerleaders are a bra
for the team: support support
as if girls
could be citizens
we mouth the tunes
of bellicose stasis
because time only seems
to advance and we won't


let it.
We're puppets since words
sing through us from wherever not
ours into everyone we're screwed

or on a pulse give me
an A


Figures explain lives
that's why cheering counts.
Democracy's based on
numbers so invisible
the sky ever clean

in Democracy time isn't
there but the filed synchronizes
bodies and pools them
humming in blood into one
model alone.

Doris prefaces her book with this:

Concentrating on my life's work about Money-Love-Writing (how they're the same fault) which involves Ancient Greek and Arabic metrics, I got to thinking of Pindar as a cheerleader so I started writing this which I thought would be part of that but it isn't really. Plus living here now in the West which means going to Central America to swim as often as possible, I started considering Mesoamerican time and its ballgames which bring me to our own.

N0t Righ+ N0w is based on the name of one of the grandfathers and fathers of the four great houses of the Lord Quiches in the Popol Vuh. I cast them as football triplets.

I rearranged the word "culture" to "cultrue" and "field," filled," "filed" are interchangeable.
There are a few variations on "leadership" as well.

The team and its town are known roughly as Twisted or Deception High. So's everyplace here.

The text in general is a sort of sandwich-translation read-through of four books: Popol Vuh, Paterson, Tibetan Book of the Dead, and the Secret Autobiographies of Jigme Lingpa.

You can hear Stacy reading her work here.
Posted by Robin Tremblay-McGaw at 12:31 PM No comments: