We spent the long Labor Day weekend on the western shore of Lake Tahoe. I plunged into its icy waters everyday for four days in a row. Even after 15 years of returning to the lake, I never tire of the view and the many hues of blue it flashes. 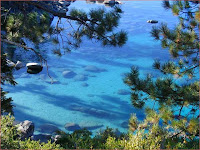 An additional pleasure this year included gobbling up Dodie Bellamy's the buddhist from Publication Studio. The book begins with a bang--the details of which I will leave you to discover for yourselves--as it unleashes its garrulous alchemy, turning Bellamy's blog posts on the fireworks and subsequent fallout from a relationship with "the buddhist" into a book that pushes all kinds of literary/aesthetic/social boundaries, all the while maintaining a running commentary/meditation of and on its coming-into-being. Boundaries and how they get pushed around, wadded up, shoved aside, pierced, pummeled, and sometimes, maintained, are always central to Bellamy's writing. 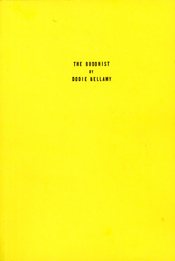 For lots of different reasons, I tend to keep some pretty firm walls between different parts of my life, but I revel in how Bellamy and most New Narrative writers mess with these walls and what they have to do with writing.

Bellamy is unafraid to parade and take apart what Sianne Ngai has called "ugly feelings." She names their gendered/political frameworks:


This is what I was getting at in my post on public display and operatic suffering--an in-your-face owning of one's own vulnerability and fucked-upness to the point of embarrassing and offending tight-asses is a powerful feminist strategy. Writing is tough work, I don't see how anyone can really write from a position of weakness. Sometimes I may start out in that position, but the act of commandeering words flips me into a position of power. To deny behaviors and experiences gendered as weak or "feminine" is not feminist or queer, it's heteronormative to the hilt. Like Kathy Acker, I long to quiver and terrify in the same gasp (35).
﻿
﻿


Bellamy's book is full of a wide array of references to writing, the writing community, to other writers, artists, film-makers, musicians, and an array of Hollywood films, to spirituality, meditation, the death of Bellamy's mother, academic interview committees, Buddhist sex scandals, Ambien, Culver City hotel stays, and more. I love that this book includes a whole host of images, some taken by Bellamy and others snatched from elsewhere (like the one above).

Here's one of my favorite passages:


The nightgown I brought with me is getting funky so I bought another one at the Nordstrom Rack at the Howard Hughes Center. Being a Princess and the Pea type person, I cut out the tags so they wouldn't scratch my delicate nature as I slept. 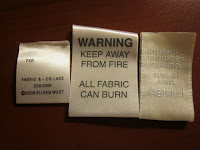 You gotta love the middle, WARNING: KEEP AWAY FROM FIRE tag, and its lame attempt at a comforting afterthought: ALL FABRIC CAN BURN. Like they're trying to convince you that this nightgown isn't particularly flammable—it's more of an existential thing, more like every time you go to bed you're in danger of combusting into yet another Anima Sola, running through the night, heartbroken over the buddhist, engulfed in tonguey orange flames. She must have bought her nightgown at Nordstrom Rack too (100). 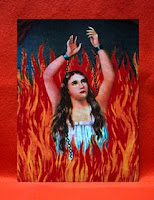 The Buddhist begins with its title all in capitals on the cover but by the time the book closes, the buddhist has shrunk to all lower case. The book begins with engorgement and ends post-sex, "with printed love" (145). But, it takes awhile to get there. Throughout the book, Bellamy suggests that she will stop writing about the buddhist, as here:

...that's what it feels like with the buddhist, those final musculature contractions of a dead thing. I'm tired of writing about him. Back in the early days of New Narrative, when we were all wanting to be in one another's work, I complained to Kevin, why don't you write about me, and Kevin said he didn't write about me because writing was an exorcism, and he didn't want to exorcise me. Writing about the buddhist here has been a sort of  exorcism, but the time for that has passed--no more soap opera narrative for this blog, time to return to random bleeps of experience and observation (39).

But of course, he keeps turning up, however much he is denied and/or newly buried:

"The unhooking from the buddhist now feels complete; I'm ready to open the door and step out into the rays of my sunlit future" (49).

"I wish I could erase the buddhist from my consciousness, I'm sick of thinking about him, but my writing brought him into my life, and it seems he's going to stay there in spirit, if not in flesh, until the writing's through with him" (56).

"Based on this blog, I'm sure it sounds like I talk about him all the time, but I don't. I was feeling melancholy about the whole situation today--and there it was again, the unshakable longing that I keep thinking I've shaken--like the eternal return, it comes back again and again, its quality essentially unchanged. When the longing strikes, I get this romantic sense that the buddhist is feeling it as well..." (104).

Bellamy is aware of this constant return, of course, and works it as much as it works her. She includes in the book a section in which Colter Jacobsen, artist, friend and publisher of the buddhist, remarks upon this recurrence:

Colter added:
I thought of you when i read this [a quote from Proust]...I hope I wasn't insensitive when I said that i like the constant return in the blog of the buddhist. It was also meant to be an observation that while you are editing the buddhist blog, it also seems to be growing....I think it is brave and vulnerable....I think people appreciate this because we can so relate to it; there's always someone in our life whose relationship was left unresolved and complicated and so much time is spent weighing what happened...till it becomes almost and abstraction. (129).

I think Bellamy's constant return to the buddhist makes for a kind of abjection that is uncomfortable for the reader. Our identification with it might not be uncomplicated; or we might deny any identification with it. There's something particularly interesting to me in this display and working with and in this space of abjection; it is all about discomfort, distances, contagion. It seems to be the source of writing, writing as intense content but also intensive formal practice and investigation, abjection and writing that both undoes and remakes a person and a person's work.

Here are some other selections from the book:

Of course it ended badly. Recently I tried to smooth things over with The Buddhist. It was disastrous. Bradford Nordeen on my efforts: 'Aren't these awful experiences best when they're funneled into the work so that heartache is turned into a piece, made productive? That piece is written (and lovely) so why on earth would you get back into the sandbox?" Bradford's referring to the 1000-word story/memoir I recently completed called "The Buddhist," a piece so obscene it makes my soul blush. 1000 words sounds right; I have no desire to write any more "real" writing about him. I enjoyed working with brevity--layering subtlety into such a raunchy, blatant blip. I even created a character arc for the protagonist, just like they do in real fiction. The "now" takes place within a few minutes, but the content extends and swirls way out, the now being like the eye of a tornado, and everything else racing around that. It never ceases to amaze me that no matter how personal or vulnerable my subject matter, at a certain point in writing it all boils down to formal concerns, I become this slightly mad biologist panting to herself as I pin a butterfly, alive and writhing, to a cardboard background. Of course I'm thinking of Nabokov here. Is 1000 words and a community who's been entertained for 5 months worth the pain?  And, yes, there was pleasure as well. It was like being in a cult, a strange narcissistic Buddhist sex cult. I wouldn't have passed it up for the world (34).


Throughout I've tried to use my babbling about loss and betrayal as an opportunity to refine and promote a political/aesthetic position (49).

...after poopooing divisions, I made a distinction between blog writing and Real Writing. That's a hard one, for I don't know what I'm doing here, why I'm putting all this energy into these posts. I think of poets who speak of their 'writing practice,' meaning it's all part of the process; they don't separate out precious, discrete poems as real work and letters and journals as lesser work. Thus the fetishization of George Oppen's daybooks for example. I've always considered the whole Writing Practice idea as yet another example of some poets' insufferable egotism, a total guy thing, like they think they're such geniuses their shopping lists should be bronzed. Would these guys consider a woman blogging about her heartbreak as part of a serious writing practice? I doubt it. Is my refusing to consider this blog Real Writing an internalized misogyny? My posts are too slight, too femmy, too sloppy (I'm a compulsive reviser), too easy. So Rainer's right: I'm conflicted (73).

This section follows a passage Bellamy quotes from Helen Molesworth's "Me, You, Us: Eva Hesse's Early Paintings." Bellamy writes:

Art writing doesn't get much better than this--Molesworth's willingness to engage in such a personal, intimate relationship with Hesse's work, while never losing her analytic eye. This idea of the image looking back feels key here. It's as if the effort made to create a work invests the work with its own personhood--an otherly personhood that stares back at its creator, a stare fed by the psychic bleeding of the creator, that results both in relief and a slap of the uncanny. If the work doesn't stare back at you, you haven't invested enough energy in it. The buddhist once asked me if writing was my religion, and I said no, writing is not my religion. I don't know what religion is for me. Writing is my calling (80-81).

Dear Potential Readers out there: This books looks back and it is calling to you!