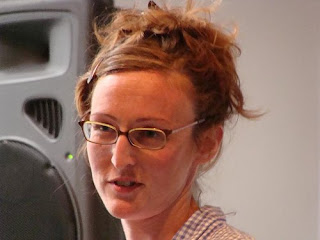 Sunday night, the 18th of July: Oakland:  The (New) Reading Series at 21 Grand. warm like summer though it was foggy in San Francisco. People in summer dresses and t-shirts. A completely PACKED room. Standing room only and then, graciously, more chairs. Catherine Meng started us out this evening.  Her poems were filled with animals. The first piece she read was entitled "Goat Farmers of Uruguay." Another was titled "Poet Safari."  And another "The Last Cowgirl." Another "65." Some lovely lines I heard included:

In the background of all this work lurked figures for the mediating interface of software and technology. This struck me as interesting and accurate, particularly for younger poets who have come of age in a software mediated environment. 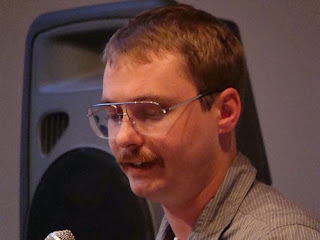 Thom Donovan then took the stage and serendipitously one heard the words "sylvan" and "dirt" mentioned in some of Meng's work taken up in Thom's.

Thom launched into his reading of his first poem without commentary and thus sort of wrapped his arms around us, somehow including us by not marking the line between poet with explanation or intro to the poem and audience as hearer or receiver of poem. Since Donovan's work explores community and the communal, this was apt.

Lines I heard in this poem included "templates of a wound" and "the dead could not die. we must teach them," "into the diegesis we go."

Thom then read from a piece entitled "The Hole (Notes)," a piece that writes around and about a manuscript he was putting together this spring entitled "The Hole" to be brought out by Displaced Press.  These notes appeared on Harriet here in April of this year.

In this piece, he writes "Robert Smithson quotes Carl Andre as saying “a thing is a hole in a thing it is not.” And this is one way to think about the hole of this ms’s title—as an absence or negativity which affirms the fact that nothing is something too."  This is a beautiful piece in and of itself and circles around a number of issues that are engaging and provocative.  Here's another bit from it:

" The world is not totally administered, not a discursive machine, not totally, yet. Affect subtracted from emotion might make a collective subject. Lyric is (still) a site for collective subjects. Rhythm (the words as they find rhythm) and “sonic substance” (Fred Moten’s term) as a kind of marsh or phylum for the vita activa. The hole is what ‘I’ am digging and what digs ‘me,’ literally. Against expropriation lyric radicalized observes the fact of dirt moved. Dirt as property relation. Dirt as money (abstraction of social wealth). Dirt as what remains after irresponsible corporate-industrial behavior—strip mining, oil spills, deregulation of toxicity. How to sing this except through a tortuous and straining syntax? Somatic sublimation and decreation."

This piece offers hope and critical attention to the now and a possible future. This piece alone--never mind the lovely people, the rest of the poetry from both writers (Thom read a number of poems that appear on his blog here)--made the trip across the Bay--always a psychological as well as geographical barrier--so worth it.