Poets Theater at SPT: Evening One

Small Press Traffic held its annual Poets Theater fête in a new location at Counterpulse, a truly professional and fabulous experimental performance space on Market near 9th Street. On Sunday afternoon, the theater was packed to the rafters, all seats taken and people on the floor. The event started fashionably late as Samantha Giles, Sara Wintz, Lauren Shufran and Camille Roy, all SPT board members, performed their introduction to the evening as a  mock meeting.

Then Paul Ebenkamp's "You Have to Take Care of My Work Together" emerged as the afternoon's curtain-raiser, with a number of audience members calling out lines in the dark: "My kid could have done this"; "Could my kid have done this?"; "Did I do this?" "Did I have my kid do this?" etc.

Next up Bob Glück and Jocelyn Saidenberg's "Precious Princess, or, Pig Speak" included David Brazil as Sleeping Beauty who has lost her head, but wears a finger crown; and Yedda Morrison was a sock monkey, Brandon Brown, Balso the Knight, and Michelle Ty as the longed for Precious Princess who emerges out of Sleeping Beauty's freshly laid giant pink egg. (Jocelyn tells me that both this exquisite pink egg and Sleeping Beauty's finger were crafted by Bob Glück.) This Precious Princess turns out to be a Precious Pig who wants to roll in the eternal mud and forge a kind of pigology at the intersection of poetry and philosophy. Silly and fun, this play had a kind of tea flower at the center. I've seen pictures of them, those balls in hot water in a clear tea pot; they bloom and look like some underwater anemone.


Here are some excerpts:

Balso: Sleeping Beauty, are you going to have a beautiful baby?


Sleeping Beauty: Oh, Oh, Oh, I think I am having my baby right now—here she comes! I can feel her moving inside of me. She is coming out, here she comes!


(Sleeping Beauty lifts up the egg.)


Balso: Wow, Sleeping Beauty. I have never seen such a big egg. You may not have a head, but you have a big pink egg to hatch.


Sleeping Beauty: Now we have to wait for my egg to crack. I am so excited! My precious princess is in my egg!


Sleeping Beauty: PIG child, where DO all your questions come from?


Sleeping Beauty (indignant): Easy for YOU to say!


Precious Pig: Since I was born with a head, let’s begin my education.


Balso: The origins of meaning, of space and time. We can call it, Pigology.


Sleeping Beauty: No, no, Precious Pig, I want you to grow up to fan yourself, wear my 12,000 hats, and put your napkin in your lap.


Precious Pig: Royal Mother, I want to learn about caves and shadows, but more than that, I want to roll in the eternal mud.


Sleeping Beauty: You mean poetry? Let’s have an elegant salon. Does anyone have a potted palm? There’s nothing like a potted palm for culture.

You think YOU’VE written a play! You think YOU’RE in a play! You think YOU are YOU!!!!  I have written, directed and starred in the movie version, play version, novel version, opera version, torch song version--you name it!   I invented plays--and Pigology, before there were even pigs or even lologies.  Jeez.  I am all versions, my middle name is VARIANCE.  Monkey Variarum Monkey, to be precisely Latinate.  In Monkey where Monkeys make more Monkey and nothing more, Trippy!  The critics made a big fuss when I starred in Titus Monkonicus, and when I was shot out of a cannon in Monkeys on Parade.  (He speaks in Sleeping Beauty’s voice.)  “This is the very limit of anything that we ever saw or wanted to see or even could imagine.”  (sings) Monkeys, on Parade!  Talking ‘bout Monkeys on Parade.  Hand to hand combat, death and desire, we all just want to be shot out of a cannon by one of our own kind.  That is, I created the universe for me!  I AM the expanding logic of the Empire, but take it from me, Sleeping Beauty, I am also the ambiguity that rules the depths.
﻿﻿

In "The Morton Salt Girl Monologue: NaCl and the Meaning of Her Mark," Wendy Kramer, clad in a yellow slip of a dress and yellow wig, wore white tights and occasionally took up her umbrella as she shared the stage with projections of her collages based on the Morton Salt girl. This piece was astonishing. "It is quiet here under the weather" began Kramer. I loved how Wendy's passion for collage and archival sleuthing met performance in her exploration of how "my mineral morphs into meaning." Quiet and stark with its reference to "dry-eyed tears of industry," Kramer's piece hung in the air, a vibrato in the midst of so much raucousness.

You can see Wendy's collages at her blog. 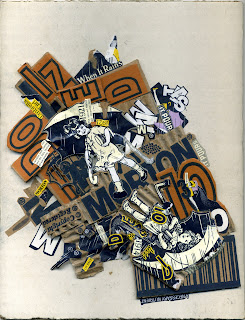 Here are some excerpts from "The Morton Salt Girl":

The water draws down, the salt falls away like breadcrumbs behind. “When it rains it pours.”

[Rain crescendos a little. MSG steps out, left foot first, and walks to music stand. She faces front, taking
a 1914-girl stance, with both feet forward. Rain dies down and stops.]

MSG [turning back to the audience]: They will tell you that the salt is raked from desert beds, or
vacuum evaporated and panned from soaking seas, or mined as rock from the earth-crust; but it comes
from me, as I eke out this living. The organ pressure towards import hurts-- natron preserved the
ancient Egyptian dead; sodium chloride intimates our vitals.

From a negative adage “It never rains but it pours” to a positive advertisement for housekeep
manufacture (you've heard it), my mineral morphs into meaning. Cation plus anion minus frustration
with the present interrupted by the past... eyes downcast... abstracted, pensive, forensic...I look at you, I
look askance...I seek my solution.

Ronald Palmer, Cynthia Sailers, and Stephanie Young's "Utopia and Other Drugs: Tale of a Pharma-whore," was directed by Brent Cunningham and featured Young as a patient, Palmer as a drug company rep and Kelsa Trom as a therapist. Everyone is looking for an eternal hard-on in this play and the orgasms never stop coming while Jean Genet, Judith Butler and others drop by.

Lindsey Boldt and Steve Orth's "Dating by Consensus" rounded out the first half of the evening. In this witty and humorous play, Boldt and Orth are on a first date, but this date proceeds according to consensus, as if the two were at an Occupy General Assembly meeting: there is an agenda, hand signals, and a third-party arbitrator who also takes notes. Even the waiter has to wait his turn to speak. Boldt's character professes her solidarity with the waiter because "I worked in a coffee shop for six months before going to Sarah Lawrence."

You can watch Andrew Kenower's video of "Dating by Consensus" here:
I hated to leave at Intermission, but had to. I am willing to bet the second half of the evening was just a satisfying!

Here's the full line-up and the promise for next Sunday:
+Idioterne by Joseph Kaplan and directed by Zach Tuck 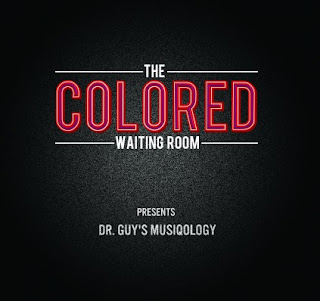 Check out the latest CD project, "The Colored Waiting Room,"  by Dr. Guthrie Ramsey, pianist, composer, music historian and professor of music at the University of Pennsylvania. Ramsey's project title is both a "remembrance and a recovery, recalling a time when black passengers were confined to segregated waiting rooms before they travelled  by bus or by rail." Ramsey notes that these waiting rooms were spaces of confinement, but also offered a form of freedom as they provided a space for free expression, away from a broader (and racist) public. The CD is performed by Ramsey's band, Dr. Guy's Musiqology and imagines the colored waiting room as a nightclub. In a short film, Ramsey explains the project:
http://www.youtube.com/watch?v=5ulNP9ZseD4