Poetry at the Headlands Center for the Arts 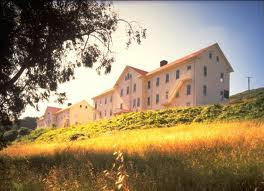 Last Sunday, a classic Bay Area summer day (foggy-turned-sunny-in-late-afternoon ), Kathleen Fraser and I headed out to Marin for a reading at the Headlands Center for the Arts. Miraculously, the reading started on time, and equally miraculously, we arrived with some time to spare. The place is stunning and since it was the Summer Open House, there were a good many people there visiting artists' studios and eating the organic chef-prepared food at the cafe.

The reading happened on the second floor in the East Wing of Building 944. I wish I had my camera with me! The room is enormous and light filled; the walls were, I think,a kind of wasted white with yellowed cracks running all over them and the ceiling still had its decorative tin work which had been sand-blasted and left unpainted, a gun-metal gray. 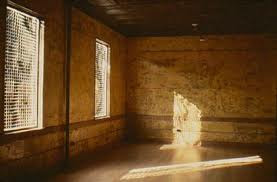 Here's what the Headlands' web site says about the site's history:


Originally inhabited by the native Miwok, the area was used for military installations for more than a century before the army withdrew in 1972 and turned over the land to the National Park Service. This combination of wilderness and urban environments is a fulcrum for Headland's creative investigations into the relationship between human and natural systems.


Since 1985, Headlands has renovated these remarkable historic structures through granting commissions to artists. Major American artists, including Ann Hamilton, David Ireland, Bruce Tomb and John Randolph, have designed and supervised the renovation of the public rooms in our main building.

In 1998, artist Leonard Hunter and architect Mark Cavagnero led the award-winning rehabilitation of a nearby 1907 Army storage depot, which now houses the Affiliate Artist program studios.

While the acoustics and the great many people moving about made listening sometimes difficult, the audience of 50+ people found much to enjoy. I asked some of the writers whose pieces I most responded to, to send me some of their work, and they did. Here they are for your reading pleasure.

The first is a poem by Brian Teare who prefaced his reading by saying that he had been reading Robert Creeley and Wang Wei on top of one another, in part, as a way to work on cutting or opening up his work.

past the decommissioned fort
past the former nike missile site

past the abandoned battery
past the empty gun platform

past dugouts lined with concrete
sandbags
the ocean

wounding the cloth that held their bodies

ocean on the other side of our sleep


The next excerpted piece is by Steven Gilmartin, a Bay Area writer who was once a student of Kathleen's. Steven has been translating Emily Dickinson's work into German and then back into English; he has also translated Cesar Vallejo, though the work he read on Sunday was from a piece on the Hoover Dam. He describes the writing as "a condensation of a significantly longer work-in-progress, as yet untitled, that had turned into more of a work-not-in-progress." Steven noted that "the reading really helped me sharpen the piece and has renewed my interest in working on it and developing it further." Let's hope so!

The area that drains water into the place where the dam will be built is called the watershed.
—James E. Kelly and William R. Park, The Dam Builders


Birth of the New
Positioned using front loaders and lifted with the aid of a wire matrix, art deco lips are installed on either side of the canyon.

Employees
From the Department of Labor’s Employee Analysis Section: “High-altitude dryland shelf-perch types ‘think things through’ but then rise with a loud whir and a ringing, high-pitched call. This almost never develops into true musical production, for the type is easy to locate. Rapid turnover can be achieved by following the gravity dam model. The type remains an ideal worker profile and, given the current economic climate, is rather easily obtained.”

Construction: An Oral History
Too many got fried in the early months. You’d come to a point were your brains just about dropped out of your ears. The boys in the hole would haul in almost blind from dehydration, and dumb after acres of hub-tendered concrete. That would set the signal punks scrambling; it’s what you got for history. They’d put your name in and off you’d go about their business.

We learned there’s a vocabulary of industry where words are sure-fire and mighty. They range far as rivers and pool on the tongue, looking out calm and pretending their gazing purrs. Big-cat words. Their mouth runs like heaven just decided to descend and do nothing but power their cities. And you’ve got to work blind, sensitive to tone like an animal, and just as easily confused. But then it comforts you and you lie in it.

The high-scalers would rappel down the canyon face then pull themselves back up like furious spiders. You could hear their shouts above the dynamite sculpting, the jackhammers, dodging stripped rock, crescent wrenches slipping and plummeting, drill steel come unslung, bodies of men cascading through beds of air...

It was good, tho, when the sound rang down the backbone, with the magic from on high--those stiff, flat, endless desert gravel lodes, but swung there as if shot slow-mo from the finger of the god of wet, superheating high mix, low mix. And if you were buried, there were plenty more. Was what was conveyed to puddlers and the rest by well-graded shifters.

Natural Correspondence
Letters addressed to the hydraulic engineers flowed in from Nature. Her handwriting was hard to decipher, but “Assume a virtue if you have it not” was one of the fancier constructions. This brought a possible corollary: “No one can be natural anymore.” Who knew that Nature would be such a quoter. But the consensus was she was cryptic. Or a whiner. The idea that she was a stone cold bitch was also popular.


The next piece is an excerpt from Elise Ficarra's poem "Endangered Species." Elise explains that the piece "was written as part of a collaboration with the installation artist Karrie Hovey on the Vanquishing Terrains Broadside exhibit that will show at Intersection for the Arts in May 2012. Part of the text will be excerpted for a traditional 11x17 broadside, and the rest feeds into a "21st Century" conceptual broadside, which will be an installation made by Karrie Hovery, Evelyn Ficarra (composer and sound artist) and me."

Last but not least, is a tiny little bit of a poem entitled "PRAISE SONG FOR A STATE OF MIND THAT NO LONGER FEELS VALID OR, A VALEDICTION: FORBIDDING DISCOURAGING PATTERNS OF THINKING," by Genine Lentine.

In March, all I could was write praise songs to you.
Now, it's more like this: "A Praise Song for What no Longer Matters."

I no longer have my copy of her Writings.
But I think what is Kind here
in German was Freundlich
Friendly. Fate is friendly.
I have lent and given the book
to many friends so I would have some company
in sclaing this althletic proposition
This book now costs $450 used on Amazon
so only by unforseen grace will I come
into a copy again myself.
When I first read this book,
it felt like a manual for the forsaken,
and I figured I alone
needed its strict consolations.
Then it started cropping up in stacks
in Spoonbill and Sugartown,
and soon people were quoting passages to me
and now the book has its own Facebook page.

Anyway, what if I say:
"A Praise Song For What I thought Mattered, but Doesn't Now"
with the parenthetical subtitle, (which does not negate its mattering once,)

or "A Praise Song For What Seems to Matter Now, but Won't in One Week,"

or "For What You're Afraid Will Happen, and Will Actually Happen,"

there's more to this poem but you will have to wait for it to appear elsewhere!

All-in-all, a satisfying way to spend a Sunday afternoon.
Posted by Robin Tremblay-McGaw at 2:52 PM 1 comment:

I know summer isn't over and that the Giants have had some success in recent years though I'm unsure about what is happening in baseball right now....I reveal my lack of baseball enthusiasm, I know. However, I do know that I quite enjoy Spicer. A little film made by Cole Heinowitz and shared on Facebook has sent me here and I'm sending you here too!

1.
Do the flowers change as I touch your skin?
They are merely buttercups. No sign of death in them. They die
and you know by their death that it is no longer summer.
Baseball season.
Actually
I don't remember ever touching your back when there were
flowers (buttercups and dandelions there) waiting to die.
The end of summer.
The baseball season finished. The
Bumble-bee there cruising over a few poor flowers.
They have cut the ground from under us. The touch
Of your hands on my back. The Giants
Winning 93 games
Is as impossible
In spirit
As the grass we might walk on.

from Peter Gizzi and Kevin Killian's My Vocabulary Did This to Me: The Collected Poetry of Jack Spicer.  Go to the book to read more!
Posted by Robin Tremblay-McGaw at 3:11 PM No comments: