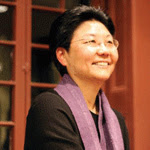 For years, somehow, I missed the Oppen Lectures.  In the last few, I’ve not missed one; they open up Oppen’s work and nearly always unwind a thread that is very specific to the speaker’s own thinking and writing.  This year Myung Mi Kim journeyed from Buffalo New York, returning to the Bay Area to deliver the annual lecture.  What a deep and satisfying pleasure it was. I've tried to capture, albeit in a very notational form, some of the experience; given the nature of these notes, it nearly goes without saying that this "account" is bound to be inadequate to the event and Myung's unfolding thinking in action. Mea culpa.

I arrived the tiniest bit late, coming in as Kim was prefacing her talk with some remarks about the challenge and complications of “response.”  She noted she was not coming at this talk from the place of lecture: “to address severely and at length.” But rather, she sought to bring together discrepancies and disjunctions, because, she noted, the power of Oppen’s work is not in statement, logic, claim. Myung approached the talk via another meaning associated with lecture:” to gather firewood.” Her talk was punctuated by “gatherings,” travel through etymology via wonder, and close, sustained engagement.  The atmosphere was alive with attention; people were rapt. Kim opened up a space in which time was elastic, appropriate, as it turned out.

She began with a series of terms--infantry, infant—harvested from Oppen’s letters.  One from George Johnson from the 60s in which Oppen writes to Johnson: “you write: ‘the war in a sense rescued me.’ ” Oppen responds: “I feel this too.”

In a second letter from the late 1970s Oppen writes of being in a foxhole, of Reznikoff’s poems running through his mind and his own ceaseless weeping. Myung wondered about the meaning of Oppen’s agreement: “I feel this too,” being carried by infantry to the open world.

Throughout her talk, Kim sought to braid three threads: time, harm, and the cracking open of language.

My notes track the following:

Time is unquantifiable; time, in the scene of the foxhole Oppen describes, is unbound.

Time is duration without measure yet asks for ever more exact measure.

Countable experience is in tension with mystery.

Reports of Oppen being “slightly injured” in the war; others assert he sustained a more serious injury.

The fact that reports are various is interesting; engages this undecidability: the difficulty of accounting for harm, what cannot be grasped in language.

Kim stated that: Oppen “refutes” the logic of figuration or the regiment of representation. He is seeking how to track harm, the harmed body and its location and relation to the singular and the collective.

Kim noted she is interested in the inaudible/audible that is figured above in the letter : “the poem running through one’s mind” and Oppen’s insistence on silence as clarity.

From here, Kim links Oppen’s statements from the Daybooks re the infant, the child: “to see the child as substantial, as a person,” to a claim that “not speaking” is not about the pre-verbal or pre-linguistic, but rather language is untethered from the developmental model; one doesn’t “graduate” from silence to language. For Oppen there is a being without language that is not deprivation.

Via Heidegger and On the Way to Language, Kim gathered Heidegger’s claim that the poet undergoes an experience and this experience is put into language.
In speaking of Oppen’s wartime letters to Mary, and the break in address that they make-- since the letter neither confirms life or death (because of the lag in time between the writing and sending of them and the time of Mary’s receipt and reading of them)-- Kim posits interruption as a mode of address operative in Oppen’s work. What resources, she asked, are called forth in the non-assurance of address? What charge might this non-assurance of address have for the lyric?

Via several other “gatherings,” Kim linked Oppen’s transversal, the inter-animation of the aporetic and caesuric, to border thinking, to new paradigms for sense making, for new forms of the social.

from “Of Being Numerous.” These lines have haunted Kim.  And one can see why, given Kim’s own poetic projects.  At once they gesture to the grimmest of facts—the confirmation that it is impossible to speak, the foreboding inadequacy of language; the suggestion that the only possible response might be to refuse to speak.  Simultaneously the lines offer silence or speechlessness as a praxis of possibility, tender entreaty: May I hope with you to be able to speak.

There is much more to say, fragmentary and not, about the capacious and generous reading of Oppen’s work performed by Myung. We listened to a bit of Bach’s B Minor Mass, Oppen having said of it that he “wept because it says everything that can ever be said,” and we heard a recording of Oppen introducing Charles Reznikoff ‘s reading at the Poetry Center. [You can hear Oppen’s intro here at Penn Sound]. We also performed a group reading of sections from “Of Being Numerous.” Throughout the talk, Kim took time to provide a generous scaffolding for her audience, occasionally retreating to reiterate a crucial point, outlining her trajectory, moving at a pace that made it possible to follow her, to move along her trajectory with awe and pleasure, as it unfurled before us. She made use of that aporetic, caesuric, border thinking that animates her own as well as Oppen’s exquisite space of the uncategorizable, the resonant plural, the “cadence of unfolding” in his poetics, what Kim called, a persistence of practice.

Find out more about Myung and The Poetry Center here.

For more from xpoetics on Oppen Lectures: