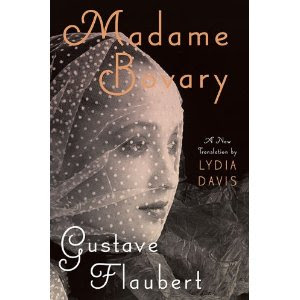 I have just finished reading Lydia Davis's new and thrilling translation of Gustave Flaubert's Madame Bovary, published by Flaubert in 1856 in six installments in La Revue de Paris. I first read Madame Bovary many years ago, maybe twenty. I no longer have the book and probably didn't then, having, in all likelihood, read a library copy, so I don't know which translation I read. What I do recall is that, for me then, it was unremarkable.

This time around I am dazzled. While the translation is of paramount importance, in my own case, I suspect that there is something about reading and having grown as a reader that is relevant to my new appreciation. And, since Madame Bovary is in fact in many ways, about reading, what could be more appropriate. There is more to reading than learning to recognize words. Or, to quote (and then revise) a Latin phrase that the pharmacist Homais uses, Fabricando fit faber, age quod agis. Davis provides a note about this phrase as follows: "Practice makes perfect." or, more literally, "It is by making that you become a maker, whatever it is that you do." It is by reading that one becomes a reader.

Madame Bovary (MB) begins with the first person plural pronoun: "We were in Study Hall, when the Headmaster entered, followed by a new boy dressed in regular clothes and a school servant carrying a large desk." This mysterious "we" soon disappears into the third person, but is one of  the many contributing strangenesses of the novel, the oddities that make it difficult to locate the source(s) of narration. It begins with Charles Bovary's childhood, a childhood unlike Emma's. While at school, Charles "work[s] conscientiously, looking up all the words in the dictionary and tak[es] great pains" though "he had almost no elegance in  his constructions" (5). While Emma read novels at home and religious texts at the convent where she also listened to sermons, Charles' grew up in a household with a father who "little concerned with literature, said it was not worth the trouble!" (7).   Emma, on the other hand, 'had read Paul and Virginia" and Balzac and George Sand, and at the convent, "the metaphors of betrothed, spouse, heavenly lover, and marriage everlasting that recur in sermons stirred unexpectedly sweet sensations in the depths of her soul" (31). Emma is a reader; Charles is not, though we read that as a student he sometimes picked up the Anacharsis; Davis writes that this is possibly Jean Jacques Barthelemy's The Travels of Anacharsis the Younger in Greece, "a learned imaginary travel journal and one of the first historical novels." Instead of considering Emma's reading as a weakness, a liability, the source of her trouble, perhaps it is worth wondering what Charles might have understood or imagined had he read more....

When Emma and Léon meet for the first time, the discussion turns to reading:
"My wife doesn't take much interest in that [gardening]," said Charles. "Even though she has been told she ought to exercise, she'd rather stay in her room all the time and read."

"Like me," replied Léon; "what could be better, really, than to sit by the fire in the evening with a book, while the wind beats against the windowpanes, and the lamp burns?..."

For Léon, Emma "was the beloved of every novel, the heroine of every drama, the vague she of every volume of poetry" (235).

Later, at Emma's deathbed, Homais and the curé argue about religion, largely through reference to various texts:

"'Read Voltaire!' one was saying; 'read d'Holbach, read the Encyclopeida!'"

"'Read the Letters of Some Portuguese Jews!' the other was saying; 'read The Proof of Christianity, by the former magistrate Nicholas!'" (294)

Madame Bovary is constructed around disparate understandings of words, reading, and the world, but enmeshed in all of this, too, are the strange and mobile materials of gender. Famously , there is Flaubert's claim, "Je suis Madame Bovary!" Of course, it was Charles Baudelaire who first identified Emma Bovary's strange androgyny in his review of the book. He wrote:


You can read Baudelaire's review here.  There is much to say about the way gender structures and unravels distinctions between characters, the project of the novel and its deployment of narrativity. But, for now, these little observances:

"Charles was not a wit by nature, he had not been brilliant during the wedding festivities....the next day, however, he seemed another man. It was he whom one would have taken for the virgin the day before..." (26).


"Then, a hundred steps further on, she stopped again; and through her veil, which fell obliquely from her man's hat down over her hips, her face could be seen in bluish transparency, as though she were swimming under azure waves" (139).


Later, it is Léon who seems to be Emma's mistress: "She wanted him to dress all in black and grow a little pointed beard on his chin so that he would resemble the portraits of Louis XIII. She wanted to see his rooms....She asked for verses, verses composed for her....He did not question her ideas; he accepted all her tastes; he was becoming her mistress more than she was his" (246).


There are also various markers of race: what Tisa Bryant calls unexplained presences:

"She had read Paul and Virginia, and she had dreamed of the little bamboo house, the Negro Domingo, the dog Faithful, but most of all of the sweet friendship of a good little brother who goes off to fetch red fruit for you from great trees taller than church steeples, or runs barefoot over the sand, bringing you a bird's nest" (30).
"But not being very well versed in these matters once they were beyond certain bounds, he wrote to Monsieur Boulard, Monseigneur's bookseller, to send him something particularly good for a female of high intelligence. The bookseller,with as much indifference as if he were dispatching cheap trinkets to black Africans, packaged up a hodgepodge of everything then current in the religious book trade" (188).

Check out this passage in which the church in Rouen is figured by Leon's active, romantic imagination, as a gigantic boudoir:

"Leon, with a sober step, was walking close to the walls. Never had life seemed so good to him. Any minute now she would appear, charming, agitated, glancing behind her at the eyes that were following her,--in her flounced dress, her gold lorgnette, her thin little boots, all kinds of elegant refinements he had never had a taste of before, and with all the ineffable seductiveness of virtue yielding. The church, like a gigantic boudoir, was arranging itself around her; the vaults were leaning down to gather  up, in the shadows, the confession of her love; the windows shone resplendent to illuminate her face; and the censers burned so that she might appear like an angel, amid clouds of perfume" (213).

I borrowed Davis's Madame Bovary from the library, but it is a book, really, one wants to own. Enjoy.
Posted by Robin Tremblay-McGaw at 3:39 PM