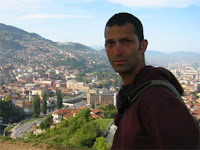 
Rob Halpern will be presenting the Poetry Center's George Oppen Memorial Lecture :  "Becoming a Patient of History: George Oppen's Domesticity and the Relocation of Politics."


Currently, he’s co-editing, together with Kathleen Fraser, the poems of the late Frances Jaffer, and translating the early essays of Georges Perec, the second of which, “Commitment or the Crisis of Language,” recently appeared in the Review of Contemporary Fiction with an essay of his own on Perec.

An active participant in the Nonsite Collective, Rob lives in San Francisco and Ypsilanti, Michigan, where he teaches English and Creative Writing (Poetry Center).

The Wide Road: Lyn Hejinian and Carla Harryman
Here's what Belladonna has to say about the book and reading:
Belladonna Series is beside itself tickled to release The Wide Road, the long awaited masterpiece collaboration of two of our heroes Lyn Hejinian and Carla Harryman. Self-described as a “picaresque buddy being,” The Wide Road is a reveling revelatory investigation of the female body, female friendship, writing, community, activism, travel and the nature and possibility of human thinking. Please join us in celebration of this wonderful book and partnership.

Lyn Hejinian was born in the San Francisco Bay Area in 1941. Poet, essayist, and translator, she is also the author or co-author of several books of poetry, including Saga/Circus (Omnidawn Publishing, 2008), The Fatalist (2003), My Life in the Nineties (Shark, 2003), and A Border Comedy (2001). She lives in Berkeley, California.
Carla Harryman is the author of twelve books of poetry, prose plays, and essays, most recently the Essay Press publication Adorno’s Noise, two experimental novels, Gardener of Stars (2001) and The Words: after Carl Sandburg’s Rootabaga Stories and Jean-Paul Sartre (1999). Harryman teaches in the Department of English at Eastern Michigan University and is on the faculty of the Milton Avery School of the Arts Graduate Program at Bard College.
Location: Dixon Place: 161 Chrystie Street; New York, NY ; Admission: $6


You can order your copy through Belladonna here.

And one that has been:

Stone Marmalade retells the legend of Orpheus and Eurydice, as seen through the theoretical writings of Giorgio Agamben. Scalapino and Killian attended Agamben’s lectures at UC Berkeley 15 years ago, and misunderstood the philosopher’s thick Italian accent so thoroughly that they got quite a lot wrong in their script.

When the Nazis inducted prisoners into the death camps, they first took away their passports and stripped them of their former nationality. Agamben said that doing so reduced the prisoners to “mere birth-life,” but we thought he was saying “bird-life,” and so a lot of our play is bird oriented. It takes place in Hell, where Eurydice, the Queen of Hell, operates a duty-free shop (another Agamben notion about the extra-juridical status shared by duty-free shops and by the death camps) assisted by an easy-going PA, Kathy.

The women find themselves in a double triangle, both of them variously attracted ti Orpheus and to the visiting Giorgio Agamben. But the play doesn’t really begin until Kathy gets pregnant and will give birth to a bird unless Eurydice allows her to have a human baby, and also, the gates of hell part and Julia Roberts has come to make a film there, or to die there, no one is sure which. Over the past 15 years we have put on various scenes, but this will be the first time the play has ever been seen in its entirety (Small Press Traffic)

My favorite part of this play was Brent Cunningham as Agamben. He had both a Marlon Brando godfather accent, complete with a mouthful of someth'n, and a Texas twang that his character has been hiding.

Here's what Leslie wrote in the 1996 intro to this play:

In seeing  Kevin Killian's plays performed, read on-book rather than memorized, sometimes as many as twenty actors  entering and passing through again in strands of plot in a loose structure as if a skit as sequence, I've had the sense of a timing as rhythm of action--which focusing on exact relations and being 'occasional' (sometimes his plays are like dramatizing movie magazine gossip as opposed to the movies themselves) particularized to the extent of loosening/freeing both the representation of character and its occurrence. He finds a rhythm  that cuts it loose from dead weight.

We share the characteristic (although expressed by different personalities) of using overtly self-conscious play-acting (either high or low style, or both at the same time) which isn't conventional narrative.

I thought it would be interesting to collaborate by writing a play in the manner of Exquisite Corpse experiments where we would each add to the body and change it in our own scenes without having to agree (agreement, as in forced decision by the producer, would be more the method of a format Hollywood film).

We made up our own form (as doubles; my scenes also have two Eurydices); and it may be top or bottom heavy left there deliberately, have no compensation for our differences--and therefore, it is hoped might have the possibility in each of our scenes of being able to bring in the existing anarchy, ridiculous by being both bathetic and lovely at the same time. (Scalapino. no page #s but page 2 of intro).
Posted by Robin Tremblay-McGaw at 2:16 PM