What is poets theater? What makes it different from theater generally? These are questions we might ask. We might answer, we know it when we see it. We might say it has a history that one might trace to Gertrude Stein and Frank O'Hara, and to others in Boston, New York and San Francisco though poets theater has been cropping up elsewhere recently, in Chicago and because Carla Harryman is in the Detroit area, one assumes poets theater is happening there as well.

In San Francisco, the last number of years at the beginning of each new year, Poets Theater has been a recurring pagan fête, like some kind of post-holiday tantalizing glitter and glut. What could be better?

First: I am so sorry to have missed last week's plays. For a Reader's Report on them, see Brandon Brown here. After some reputedly nearly nude performances, some have been engaging in a daily ritual of sit-ups. Also, part of the post-holiday glitter and glut....now, I am feeling like a gossip columnist!

But here's what I began to think about on my way home last night with regard to the question of what makes Poets Theater different from theater generally, especially when some plays are full length productions (w/ some kind of narrative "arc" even if asymptotic)and not written in any kind of "verse" or necessarily "poetic" language, though some pieces certainly do contain these elements.

One feature of Poets Theater as I have experienced it in San Francisco is its local, communal nature. The plays are written and directed and acted by writers and artists and other people in the larger alternative creative scene in the city. Those in the audience may have been, at one time or another, on the stage, and usually those who end up on the stage have almost certainly been in the audience at one point or another. Now last night, the first play (see below for program notes from SPT) was written by a Los Angeles writer, Vanessa Place. I don't know anything about Vanessa but I loved her piece. And maybe she's never been in the SPT Poets Theater audience, so perhaps my claim about the local communal nature of Poets Theater doesn't always hold true. And one might say this about Raymond Pettibon's play too: Pettibon lives in LA not San Francisco, but maybe the audience feels like we are acquainted with him because we might know his art and we certainly know about Kevin Killian and Dodie Bellamy's appreciation of his work. Nevertheless, the people who directed and acted in the pieces are local, part of the community.

Some of the pleasures of Poets Theater include the fact that we might know the actors and enjoy seeing them turn up in various guises and personalities. In one play Jocelyn Saidenberg might be a woman from Iceland, then she's "the King of Turkey" in court dress, and then later Patty Hearst. Sometimes too, the plays poke fun at the community itself, making fun of poets, artists, academics, writers. Some plays inhabit current or recent events (see The News from Zimbabwe below [and, oh, how I wanted to call out STOP! during this production which included Abu-Ghraib style torture]) and popular culture (say in almost anything that Kevin Killian does), or they might reference some of the history and drama of the Bay Area's "poetry wars," or the various incestuous and overlapping relations between members of the community itself. The plays are magnets for local history and relation. They are sticky. Vaudevillian.

Let me swerve asymptotically here for a moment:

I've been rereading Nightwood and recently gave a lecture on it (and The Postman Always Rings Twice) at UCSC. Nightwood is replete with theater and circus.

In a fabulous article: "Circuses and Spectacles: Public Culture in Nightwood" in the Journal of Modern Literature, Vol. 21, No. 1 (Summer, 1997), Laura Winkiel writes the following:

Barnes contrasts the mysterious and perplexing public life of the circus performers to the alienating effects of spectacle as they are figured by Robin Vote, a contrast that critiques the transformation of public culture from local, heterogenous sites of entertainment to the capitalized, homogenized culture industry.4 On the level of plot, Robin's solitary wanderings are an aspect of her self-destructive alcoholic behavior, yet the language used to convey her character and her explicit rejection of the circus (she flees the circus and later abandons her circus-decorated apartment) link her to Barnes's earlier critiques of mass culture spectacle. Barnes interrogated aspects of mass culture as early in her career as 1915, when she interviewed Arthur Voegtlin, the artistic director of the Hippodrome, an enormous theatre that subsumed the circus into its spectacular displays. This historical transformation from circus to spectacle rematerializes in Nightwood as its hybrid (what Barnes terms "Elizabethan") aesthetic provides the theatre for the combination of spectacle and circus. This aesthetic compensates for mass culture's alienating effects even while, at the narrative level, it expresses the loss and isolation endured by the main characters (8).

Here's the connection: Poets Theater is akin to the kinds of local, bawdy, participatory theater, circuses and vaudeville productions that existed prior to the advent of spectacular displays, "the capitalized, homogenized culture industry." Guy DuBord's writing on the spectacle is important here. (Brandon mentions spectacle in his piece too. Check it out.)

But, what does this mean for the future viability of Poets Theater beyond its local and contextualized moment and place? I think it has a future. Don't you?

The polis, properly speaking, is not the city-state in its physical location; it is the organization of the people as it arises out of acting and speaking together, and its true space lies b/w people living together for this purpose, no matter where they happen to be.

Mummers Plays (alson known as mumming) are folk plays performed by troupes known as mummers (or guisers, or pace-eggers, guysers, tipteerer, etc.. They are performed in the street or as houst-to-house visits. They date back to medieval England, with variants in German & French carnival customs.

The News from Zimbabwe: A Re-Enactment
conducted by David Buuck & cast

Inside a bedroom, three young women demonstrate simultaneous conflict and serene balance between the left and right side of a person's brain.

In this thriller an offbeat art historian is hired by a laconic attorney to authenticate a collection of priceless Old Master and Impressionist paintings on behalf of his client, socialite Marilee Larimer. Intrigue, deception, violence ensue. For reasons of time we will only be showing the first few scenes of this full-length play. 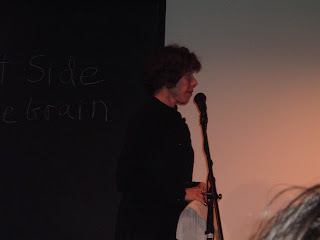 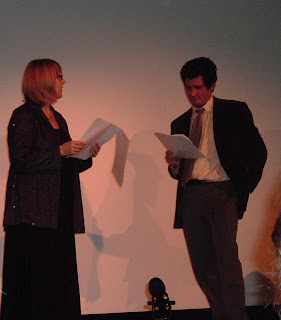 Dodie Bellamy and Jordan Kantor in Only The Money is Real 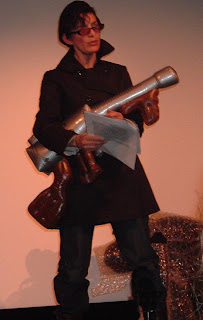 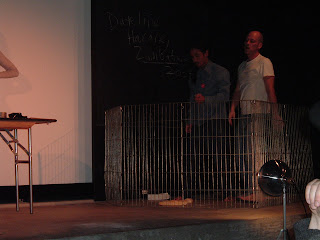 David Buuck and Dennis Somera in The News From Zimbabwe: A Re-Enactment 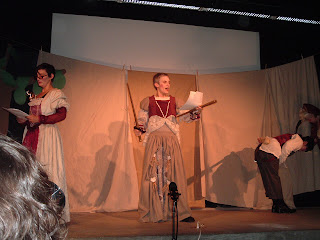 Wendy, Jocelyn and Tanya (and the back of Alli Warren's head!) 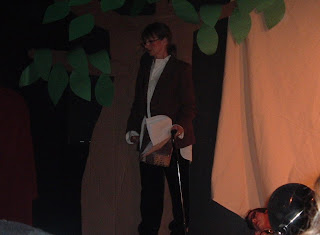 Norma Cole and Jocelyn (on the floor) in A Mummer's Play
Posted by Robin Tremblay-McGaw at 10:01 AM