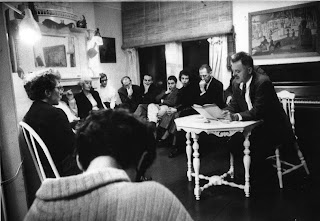 It was an unexpectedly bright and balmy Saturday afternoon when I arrived at the San Francisco Public Library for the celebration of Jack Spicer and the newly published My Vocabulary Did This To Me: The Collected Poetry of Jack Spicer, edited by Peter Gizzi and Kevin Killian. I work as a floating reference librarian at SFPL and had been scheduled to work but pleaded to get the day off to attend this event. I'm so glad! And I'm glad that Clay bought me the Spicer book for my birthday.

The Koret Auditorium was packed and people stood at the back. Kevin was the master of ceremonies, as he so often is at so many Bay Area literary events. Here he is here. 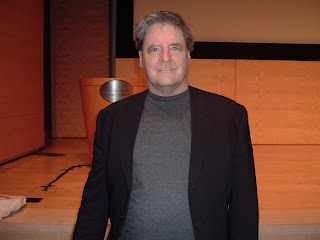 It has been more than 40 years since Spicer died in 1965 at the age of 40. He was an enigmatic and probably difficult literary companion. But his work shimmers. We are lucky to have this collected poems. Kevin explained that the collection was ready for publication some five years ago and then Robin Blaser found a cache of Spicer papers in his attic, and there was MORE to collect and edit and ultimately, for us to read. Kevin told us the book is selling well and recounted the difficulties of getting some of Spicer's work back in to print. He noted that one rather famous academic critic suggested that there was no need to bring out Spicer's work. It would appeal only to a few homosexuals in Callifornia. This is my paraphrasing of Kevin's paraphrasing.....astonishing, and yet, not. The book's sales record thus far proves this critic wrong.


Lots of Bay Area writers and artists were in attendance, including Beverly Dahlen, Nick Robinson, Norma Cole, Fran Herndon, Wendy Kramer,Taylor Brady, Jocelyn Saidenberg, Suzanne Stein, Francesca Rosa, Rob Halpern, and many, many others. Out of towners--Tom Orange and Kaplan Harris--were also visiting and on hand.

Kelly Holt read Portrait of the Artist as a Young Landscape, an early poem I really loved even if Kevin suggested something about its appropriateness as part of a soundtrack for Sixteen Candles! Here's Kelly. 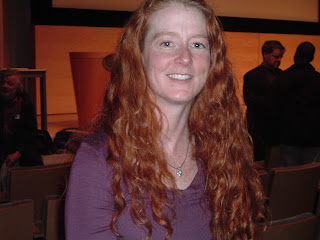 People read from: After Lorca,(poems I never get tired of: Poetry and prose combust), Psychoanalysis: An Elegy, Billy the Kid, selections from Language, The Heads of the Town Up to Aether, and more.

Laura Moriarty read from Billy the Kid and Kevin called her poem Spicer City one of the best poems written on Spicer's work. 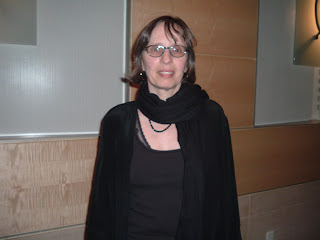 San Francisco being the city that it is--so full--outside in front of the library a rally demanding the end of the violence in Gaza: 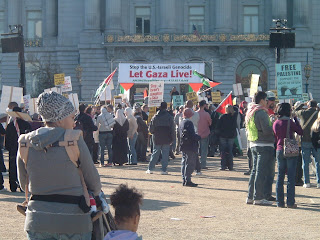 Posted by Robin Tremblay-McGaw at 4:50 PM

That is Rexroth reading of course, with Jack in the back corner, hand over his mouth, slightly balding. To his left, our right, is James Broughton. I don't think I can identify the others.

Left of Broughton is a young Philip Lamantia. William Everson (chin in hand and maybe asleep) is sitting to Rexroth's right.

Yes, Ron has correctly id'ed some in the black-and-white photo.

A couple others: Next to Spicer and Broughton is Philip Lamantia. I think next to Philip is Gogo Nesbit, and I do believe that next to her is . . . William Everson. The woman with what appears to be white hair on the other side of the room is Eve Triem. And is the woman in profile on the left side of the shot I think is Ida Hodes.

Rexroth appears to be reading from his 1956 book, In Defense of the Earth. The photo was taken at Rexroth's flat at 650 Scott Street.

The photo was part of an announcement about the event I received via email. Many thanks to all for the identifications.
Robin