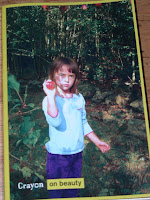 This review appears in the latest lovely edition of Crayon Magazine, edited by Andrew Levy and Roberto Harrison.

It is hard to approach Beverly Dahlen’s considerable project, A Reading, without coming up short with a minimal focus on a limited number of possibilities, while, at the same time, find much else slipping out of reach. The work’s ambition and breadth, one that multifariously propels - including contradicts itself - among its propositions, arguments and struggles has been now an unfolding process since the early 1980’s.

In the interests of full disclosure, I must say – as director of Momo’s Press – I published A Reading 1- 7 in 1985. Subsequently, Chax Press published, 8 – 10, in 1992, and, Potes and Poets, 11 – 17 in 1989. The current Instance Press volume, published in 2006, represents work accomplished between 1984 and 1986! My impression from Beverly Dahlen is her work on A Reading continues well into the nineties. However, I suspect, it is still possible to imagine that, in terms A Reading, it is work that it is still in process, one never intended to be defined in terms of closure, particularly of any formal sort. It was considered a continuous, unfolding work from the start. The good news, in terms of readership, Charles Alexander’s Chax Press has agreed to continue publishing whatever number of books will remain in the project.

Good news because A Reading is considered by many to be among the most seriously engaged writing projects during the past 25 years! This piece is not about to take on the ambition of exploring the breadth of the entire work to date. Minimally, however, one must start with the concept of “A Reading” which is, simply enough, one in which the poet is making a both critical and imaginative reading of the contents of its time. Within that scope of contents is/are the boundless interface and rub of intellectual argument, the news with its politics, the documenta of personal observation and occurrence, as well as the constant issue of the ways in which words and/or text will signify presence, rather than, say, a labyrinth of veiled allusions and/or rhetorical falseness. Or, as Dahlen might put it in almost rare, romantic frame, to make a writing during which the dictionary dances in a new silver dress. In fact, in the instance of A Reading, 18 – 21, no little amount of attention is to the ramifications (political, personal and otherwise) of language that - in its deceptive use of one sort of charade or other – is frequent cover for barbaric loss and pain. Or, on a most primal level, the wound that the “father”, in no matter what guise, would rather rifle than address. Indeed, part of the attention, the commitment of this volume is to account for the father.

It is the courage of A Reading to be “unrepentant.” The language refuses to lie down ‘with the lamb’ and join up with the father, to speak his language, obey his orders. There is a cataclysmic loss of faith – first from the church, and then variously from psychological, medical, corporate and political orders.
...those crude bones wrapped in your second-hand jeans are as unrepentant as any bizarre saint or martyr who never stepped in the same river twice...
A Reading, indeed, is the act of a disobedient.

Everything – as with her reflections in “18” on Barry Watten’s argument in his then well-known essay, “The XYZ or Reading (Negativity and Diane Ward” – is provisional. Indeed her texts – though they may echo, a tone reoccur – never step in the same river twice. The creation of an accurate language, the distancing from linguistically coded operations, becomes the ethic by which one can, at best, create an unfolding measure of survival – and, in the case of the writing here, what is astonishing is the velocity combined with a felt intellect with which the words weave and unweave from sequence to sequence, attention to attention.

The context of this work is the early eighties. Politically, the civil wars and American “covert” interventions in El Salvador and Nicaragua constitute daily news. “...Not every Latino loves magic realism...” (P. 62) Intellectually, French theorists of multiple stripes (Foucault, Kristeva, Derrida, etc.) and “Language Poets” are controlling and/or opening much of the discourse. Among leading edge feminist poets, in which the struggle was to make a language that would violate the given and permit the exploration and emergence of texts – counter-formal, counter-repressive, in combination with an unfettered range of sentiments and ironies – texts that will reflect a freedom that is not male-bound, but both expansive and inclusive. Beverly, Frances Jaffer and Kathleen Fraser started (How)ever, the feminist, critical, literary newsletter during this period.

How does the father appear? At least, in terms of the work, we are not talking of her own father. It’s not even a father with a physiological shape. Ironically enough, it seems an un-gendered father that varies from the presence of nausea in everyday life, say, the anonymous, computer generated letter in a mass mailing, to a figure much more pernicious, someone who performs barbaric acts, but disappears under the guise of men, ordinary men having a kind drink at the local bar. In the manner of invisible Central American death squads, we get the intonations of the first Bush regime:

after a decent interlude the appeal started again a steady
hammering in the eaves troughs of the State Department
before the rainy season began. the evidence was stiffened
by an eyewitness account of unusual proportions and it
was popularly believed that the borders were breached
in a corresponding tone of voice. however the vote was
inconclusive and the election was reshuffled in favor of
frequent dictators. there will always be someone
who fills the bill. children bathing their bloody stumps
in backcountry creeks will dub him uncle but they mature
more quickly in tropical climes. confirmation awaits
inspection by international teams of authorized observers.
it was a dark and stormy night. someone knocked at the door.
thunder muttered morbidly and the tossing trees were fitfully
lit by convoys grinding up the road. in this outpost of
civilization we are once again testing the theory of the hero
who must be invincible since (a) he was born an orphan and or
(b) he was born the youngest son and (c) he is a very foolish
fellow. since appearances are deceiving he will submit quite
willingly to your questions. penetrating his rustic innocence
as a sinister disguise your obligation is clear. he will be
dispatched along with his family and livestock in the ritual
happy ending. tune him out. have another beer.

It’s hard not to appreciate Beverly’s deeply ingrained sense of the American West – its cover of righteousness and destiny - particularly the ways in which its kind, pastoral religious myth (well meaning, and all of that) is constantly breached whether here or abroad, particularly the ways in which the contrivance of innocence is split asunder – with unacknowledged damage:

we were sitting in the skirts of the church with a wicker picnic
basket among us and the floor came up through the gloom to meet me...

It’s hard not to write of A Reading without acknowledging the bravery of the process, its public and historic sense of resonance. Not many writers that I can name, particularly women, have gone out on the edges and taken the responsibility from which Dahlen writes. Both Howe sisters do come to mind.
Yet, without being heavy handed, the work is not gratuitously driven. There is a soul in the balance – one, as one reads and grows to believe, a soul as much ours as that of the writer.

There is both a fearlessness and vulnerability here that feeds the authenticity of the language, but it is not without its own wounds and costs:

The desire for meaning fills me, to produce meaning, fills me with
dread and anxiety...

Or, as she later puts it,

...what was not autobiographical was the art part ...

Yet, it is “the art part” – with its unstated, implied counterpart “the hard part” - the rhythm, the eye for detail, the historical/myth resonances in the ear, the sure footed knowledge of folklore and its pedestrian music(s), that – along with the intensity of feeling, the unwavering moral sense of disturbance – that drive and elevate the language here. A Reading, from its origins to this present volume, provide us with a unique profile on a history (ours) unfolding with and before us.


Crayon may be ordered through Small Press Distribution.
Posted by Robin Tremblay-McGaw at 10:28 AM