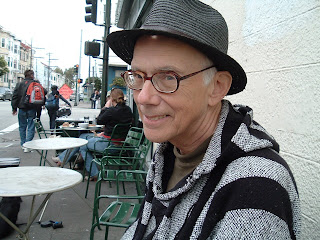 It’s been a while--has it been decades?--since I first met Bev Dahlen. There we were on the sidewalk ignoring the rain and being drenched to the bone. I can’t recall any of the topics, only the amazing vital energy we had in conversation together. Finally we noticed and realized: we needed to be out of the rain. Should we try Bob Gluck who lived nearby? We should and did. These were the post hippie days so people did things unannounced—we received shelter, food and dry clothing from Bob, as if a matter of course. That’s how things started. Personally.

Bev was nearing the end, not of her hippie but of her boho period, and drenched by the rain did she seem a bit impoverished, or bag-lady-ish? So be it. Her grouchiness became her, it kept her grounded. It contained both the wit and brilliance that makes them so common-sense. And full of compassion.

Intellectualism is one side. The sky-side you might say. Or Transcendance. The other was the impoverishment that grounds it. Through this world I used Bev to help me enter the Other—but still a citizen of this one. That was certainly one of Blake’s aspirations and Flannery O’Connor’s too. Bev is in good company. To demand that the ecstatic sky-glories of one world remain simply the flip side of the impoverishment of our own world? One grows out from the other—as the other grows this. Osiris grows in the dark as Bev showed in her Egyptian poems just as in decline that light produces dark.

Here I’ll fast forward a bit. At a reading a couple of years ago I applied to her bag-lady in her 18 Sonnets the Johnsonian term “dyspeptic.” She giggled. Sometimes I think all the ideas in this little note on Bev are contained in the mixed bag of her giggles. There can be compartmentalization in this world—and among those compartmentalizations are giggles

To show the coincidentia oppositorum—the overlap of opposites—found in Bev’s vatic thinking, her sibylline thinking I’d almost say—can only be to frame the conversation biographically.

The dreary home-coming. Going home from her job teaching newcomers, Bev inevitably took the Mission bus. What a bleak postindustrial landscape can be revealed there! What calls out for a whole inventory of smaller darknesses: like dyspepsia, mutterings, ramblings, curses. Bev—who sometimes to those who don’t know her—can look at a distance like only a sweet old lady. Protest against this world is inevitable, necessary. To reach the other world, you must rant, and rant against the spiritual archons responsible for such urban desolation. Hell-streets passed through by a bag lady whose voice turns up not just in her 18 Sonnets but everywhere in her writing.

This is really the opposite of Gregory Corso ending one poem of his with the following: “Life—the Big Lie!” If you can’t laugh at a line like that—what can you do? It always sends me personally into howls of laughter. The problem of vaticism then is the issue of how not to get trapped in a non-relation of this world and the other. Yes this world is truly a place of desolation. But to the vatic soul, like Bev’s, this opens on another that while other, coincides with it. It is not separate.

I mentioned the connection with O’Connor. Between the vatic urbanism of Bev and the rural inmpoverishment of Flannery O’Connor there is something familiar. In O’Connor the red raw hills of the beginning of stories and the violence of endings landscaped with the jagged lines of pine trees. The transcendence of the other world is this world’s immanence. Only starting by using scraps of paper, words from the Mission St. gutter, vatic comes to mean how dirty and ecstatic coincide. Ragged lines of pines line the landscape—against a sun taking over all.

Hence the Egyptian Poems. The primary statement of the Other World in Bev—Dendor and Luxor, the Book of the Dead—and this made physically beautiful by a choice of beautiful papers, scraps of gold leaf, fine typesetting. Instead of Mission St. looking up at it, it is looking down at Mission St. Neither denying either. Neither being separate from the other yet also neither being identical.

Bev uses this Gnosticism as a set of usages both of content, or teaching, and of form, or technique. Helen only seems to remain at Troy while in actuality her real body remains in Egypt. You might compare, though Bev doesn’t, the two Jesuses of the Nag Hammadi tradition. A fake Jesus, a Jesus appearance is nailed to the cross and—this nothingness dies an agonizing death. While the true Jesus hovering above like a bird of prey, laughs at the masses’ credulity. But can the true Jesus and the false one be entirely separated?—is the question I’d put in Bev’s mouth for her, if she’d let me.

To hold together two divergent realities in the same place and time, with neither superceding either. Flaubert will have none of this—it is either/or or neither/nor but not both/and. When the deluded old lady, dying, sees her parrot as the Holy Spirit, for Flaubert the bird must be either just a bird or if the Holy Spirit, then just the Holy Spirit. Bev undertakes this battle against dualism.

I can only briefly mention A Reading—her chef-d’oevre. Similar energies are at work as the wind blows swirling about you—and it’s up to you to catch on.

But the technique can vary. I’ll give only one example here. The way the Egyptian Poems coincide with the ascent visions of Nag Hammadi Gnosticism. There is a great deal of prominence given to the technical tool of question and answer. Sometimes put in different ways. Bev will just put a question for instance, then begin a single line/paragraph with the word “Explain.”

It is similar to the usages of this tool in the ascent poems of Nag Hammadi. A Gnostic candidate reaches the Keeper of the Gates (Bev retains the word “keeper” as she does “watcher” for instance) and before progressing further must answer questions. “Who are you” “I am a child of starry heaven” reads one of these ancient questions that ultimately is found on one of the gold plates of Pythagorean mysticism. There are other examples but I don’t have time. But clearly Bev has read her Robert Duncan!

Bev’s great Hellmouth essay. It must have shocked the more lady-like among feminists when it appeared. For besides being a sink and abyss, a black hole to nothingness, it would be strange for the reader not to recognize it as the vagina. Out of this darkness—again, a by now familiar dynamic—comes light, but less familiar—from that light, the dark again. In the essay Bev goes about her business with a frankness that seemed to many at the time as obscene.

Let me just sum up by saying that Bev implaces herself firmly in the vatic tradition. Hence the mention not just of Blake or O’Connor—but we can go a lot further back—to Cumae, the seat of the great Sibyll. From her books she prophecized Rome’s futures. (Today the tunnel to her cave near Naples can still be seen, tufa rock all in octagonals.)

Bev has been a friend and a teacher both. Her great contribution—a zen contribution—has been to help bridge that western dualism that began with Georges Bataille in the west, right after WWII. Bev has made that dualism a little less lop-sided than it might have been, I think. I write in praise today of my teacher and my friend and in praise of writing that has influenced so many.