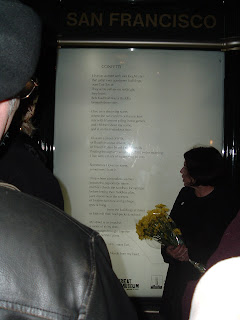 Friday night at 6pm a group of writers gathered at Washington Square Park in San Francisco to celebrate the unveiling of poetry displays at 9 locations in downtown San Francisco. The winning poems posted in these locations came from a poetry contest called Poetry in Public Display, sponsored by the Telegraph Hill Dwellers Art & Culture Committee. The project's goal was to promote North Beach poets by displaying their work in public spaces.

The committee investigated billboards or bus shelters as possible display spaces, but these proved too expensive or difficult to obtain. When the company JC DeCaux offered prominent display cases on their public lavatories in nine locations around San Francisco, including Washington Square Park and Coit Tower, the committee moved forward with the project. San Francisco poets, Neeli Cherkovski and Stephen Vincent, and Nancy Peters of City Lights Books, were the judges for the competition. Jerry Cimino of the Beat Museum graciously offered the store as the drop-off location for entries.

Each poet could submit up to three poems. Submitted poems were sent to the judges anonymously, and the judges ratings resulted in the following nine winning poems. The display location for each poem was chosen by a random process:

The Poetry In Public Display Project is sponsored by John Perino/www.focusgallerysf.org and the Beat Museum.

Next: Beth Murray and Jocelyn Saidenberg at Small Press Traffic 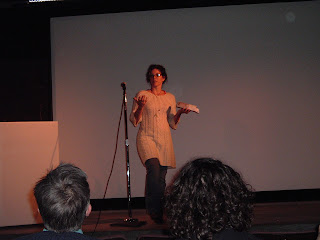 From the North Beach event to SPT: Dana Teen Lomax introduced Beth Murray by saying that she was a mix of Walt Whitman and Pink. Beth, dressed in a lovely--I want to call it frothy--white sweater, read from her book, The Book as the Island. Her work builds through accretion and return, repetition and extension. The poems are haunted by animals, a dead boy, an island and “Magnetics” the latter two gendered female. Some of the lines I jotted down in my notebook include:

“magnetics carries you to the people you need to meet”

“I am writing to warn you what lies the other side.” Lovely work. 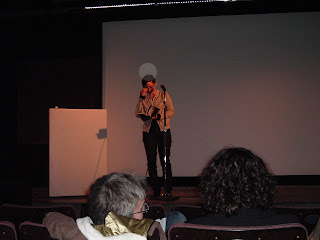 (yes, I know. I need a better camera! These shots include the backs of Wendy Kramer's and Tanya Hollis's lovely heads!)


Jocelyn Saidenberg (dazzling in those glasses and what cheekbones!) read the poem “Immure” from her Atelos book Negativity and then she read from an in-progress series of essays. Saidenberg explained Bob Glück had given her the assignment that spurred these pieces. Some consist solely of titles; others are more extended. Each of the essays (and I feel like I need to put the word “essay” in quotation marks here as part of the project is an exploration and extension of its myriad possibilities) begins with the word “On.” Some of the titles include: “On Ghosts,” “On Demented Self-Censorship,” “On Self Sovereignty.”

Chris Nagler provided a truly breath-taking introduction to Jocelyn’s work, a piece of art in its own right. I am hoping he’ll send me the intro and then I’ll post it here for all to read. Jocelyn’s experiment with these essays plumbs language and its intersection with the self, grief, misanthropy, mis/recognition, sex, relation. In the audience, everyone held his/her breath.
Posted by Robin Tremblay-McGaw at 9:57 AM

This is awsome, there is hope for this people yet.