I should say that some of the people who attended our talk on Saturday at MSA included Meta DuEwa Jones, Jeannette Lee, Clint Burnham, Barrett Watten, Alan Golding, Matt Hart, Adalaide Morris and others. We were thankful that people were interested enough to come to our panel. So many other intriguing talks were happening simultaneously, including one entitled, “Crush the Assholetters Between the Teeth: The Grotesque in Modern Poetry.” Who could resist that?

The paper titles for this panel included: “Meat Puke Beloved’: Aase Berg and the Degenerate Body in the Swedish Welfare State” (Johannes Goransson); “Crush the Assholesletters Between the Teeth: The Language Grotesque in the Works of Gunnar Ekelof and Henri Michaux” (Per Bäckström); and “Lust Murder Sex Dolls and Other Weimar Monstrosities: Anita Berber, Sebastian Droste, and Hannah Höch in Inflation-Era Berlin” (Merrill Cole)

Other panels happening at the same time included: “The Artful Orientalist: Modernist Appropriations of Japanese Art” and “Anti-Humanism in Modernism,” “Interrogation, Confession, and Representation in Modernist Media,” “Paper II: Untoward Media,” “Beyond Cosmopolitanism: Late Modernist Internationalism and Realpolitik,” and “Mediation, Methodology, and New Modernist Studies.” So much to choose from! Plus, there were roundtables on “Global Modernism and Its Discontents” and “Who Speaks for Whom? Robert Penn Warren’s Who Speaks for the Negro?” This panel included Aldon Nielsen and I was sorry to have missed it.

The conference as a whole had a number of panels and papers discussing African American and Caribbean Modernism and just a few that focused on other writers and artists of color. Hopefully in the future there will be more panels on Latin and Asian American writers. And more global modernisms.

On Friday morning, despite having arrived late the night before, I was able to drag myself out of bed to make it to an 8:30 am panel entitled "Language Poetry and the Mediation of Modernism” and I was glad that I did. The panel was organized by Bill Friend and Tom Orange and included the following papers: "Language Poetry and the Teaching of Modernism” (Alan Golding; “ Language Writing, Nonliterary Language, and Modernity Critique” (Barrett Watten; “From Periplum to Blind Witness: the Musical Aesthetics of Ezra Pound and Charles Bernstein” (Robert Zamsky; “Between Sound and Sense: Clark Coolidge and Late Modernist Lyric Poetry” (Tom Orange).

Alan Golding’s paper looked at Bob Perelman’s IFLIFE in the context of Pound and pedagogy. Golding pointed out the many allusions to teaching in IFLIFE and the way in which Perelman addresses and identifies with the “neophyte,” the “philistine” reader. Golding suggested that Perelman is making a claim for a wide ranging and inclusive kind of teaching–“teaching should aspire to the avant-garde.” Very interesting claims. I haven’t yet read IFLIFE, but you can bet I’m going to get to it soon.

One of the things that Barrett’s paper argued is that language writing is a divergence from high modernism. Barrett worked toward outlining an historical approach to language writing that goes beyond the linguistic. This is something his paper at the National Poetry Foundation’s Conference on the Poetry of the 70s addressed as well. Also, in my notes I’ve written: Performance Events Interpretation: under which appear notations about poets theater. Barrett showed a clip from Carla Harryman’s The Third Man and noted how the inclusion of characters and props that ignore or don’t interact with Steve Benson’s character (so physically wily and tensile) serve to bring the outside in.

Robert Zamsky argued that Charles Bernstein’s turn to music is a strategy for critiquing Pound. Musical forms are mobilized for argument. Tom Orange’s paper looked at Clark Coolidge’s new harmonics, his emphasis on the phoneme.

I also attended a panel called “Modernist Obscenity: The Work of Art in the Age of Pornography.” The papers for this panel were interesting in their exploration of legal mechanisms for and arbitration of “obscenity” in various modernist texts. Fellow UCSC colleague Erik Bachman gave a paper on this panel entitled, “‘You just ache to get down and lick something’: Commonwealth v Gordon, God’s Little Acre, and Smut.”

Fredric Jameson gave the Friday afternoon keynote talk entitled “From Destiny to Destinies” and though he began by saying he had no idea how long his paper was, he seemed to finish it up in just the allotted time. While his talk was largely focused on other issues by way of a reading of the work of Alexander Kluge,(though he also discussed Godard, Musil, Balzac and others) one of the things that Jameson made reference to that interested me was the problem of narrativizing labor. Can labor be narrated? This proved to be a minor part of Jameson’s talk but something that has stuck with me and I want to say yes–there is a way in which some contemporary writing does attempt to inscribe (if not narrate) labor. Ron Silliman’s work does this. I’m thinking about Tjanting in particular......But back to the MSA.

MSA also features various seminars and roundtables. The seminars consist of a group of people who, prior to the conference, write and exchange papers on a given topic. I attended one of these and was the only “observer” until someone else came in near the end. It feels somewhat strange to be listening to this large group converse about papers that they’ve read but the observer has not heard. The session I attended was called “Recording Modernism,” and it focused on the ways in which various technologies interact with, impact and shape modernist texts and practices. The radio came up with regard to Yeats and there were discussions of various contemporary technologies as well–video games, second life, etc. This session stimulated conversation about the myriad ways in which technologies discipline and shape modernist practices.

One of the highlights of this conference was a trip we took over to Fisk University to see its considerable art collection. We visited the Carl Van Vechten and Aaron Douglas galleries and had a chance to see some of Aaron Douglas’s murals. Because the murals are in a building that now serves as an administrative site and because we were there on a Saturday, we didn’t get to see them all. I was struck by one particular panel in what used to be the reading room, a room that still has its card catalog drawers lining the perimeter. The panel depicts the Dramatic Arts and with its dark silhouettes it resonated with the Kara Walker art that Tisa discussed in her paper. I haven’t been able to find online an image of this panel of the mural, so I offer you a different image below and an example of Walker’s work, though this was not one of the images that Tisa included in her fabulous powerpoint presentation. Surprisingly, someone in our group asked our freshmen guides what kind of music the Jubilee singers perform. The Jubilee Singers are so famous! 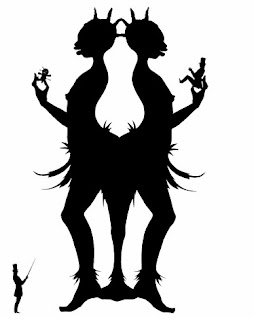 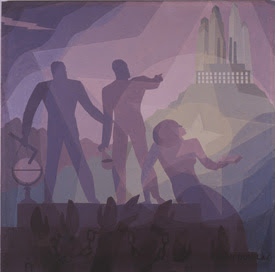 Overall, the conference was indeed a great experience. It is true that the MSA participants as a group are fashionistas. I was thankful that my daughter had convinced me to bring my new black pants with the wiiiiiiiiiide legs!
Posted by Robin Tremblay-McGaw at 2:19 PM