A Plethora of Reading Pleasures!
Larsen, Stein, Donovan, and then a Publication Party for I'll Drown My Book: Conceptual Writing by Women 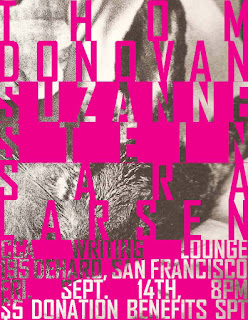 When: Friday night: 8:30 pm at the California College of the Arts (CCA) Writers’ Lounge; hosted by Michael Cross as a fundraiser for Small Press Traffic

Sara Larsen read from newly published work Merry Hell printed and stitched by the generous, talented, and new father, Michael Cross and his Compline Press. Sara’s book begins with the following epigram and dedication:
“morality is water on the brain,” says Rimbaud
for Helen
for the women of the Paris Commune
for my friends

Sara prefaced her reading by noting that she had been thinking about the misogyny of the Helen of Troy stories and also reading about the women of the Paris Commune, the pétroleuses, so named, a little research revealed, after the petrol or gasoline these revolutionary women were accused of using to burn down Paris. In addition, this work is also clearly influenced by Sara’s own involvement in Occupy Oakland.

I was smitten by this work, the way the threads of three very specific textual and political environments and discourses open up capacious, energized and rich possibilities. Here’s a little taste (with apologies for any formatting that blogger prevents!):

Suzanne Stein read next, performing a talk that had three parts; I think I am right when I say they included exegesis, oration and a rotation of consciousness. The talk incorporated the audience into the text, as it interpellated us and articulated and enacted a discomfort with readings generally (Stein does not often read in public). Suzanne noted the way readings entail a kind of manufactured “bringing of the goods” of the poem to the scene of the reading. Writing her talk so that she did “not bring the goods,” Suzanne  invoked and produced anxiety, discomfort, interestingly released when she turned our attention to the body. As a yoga or meditation teacher might lead participants to focus on specific areas—now focus on your elbow, the muscles around the elbow, etc.,--Stein encouraged us to close our eyes or to look at her as she directed our attention to our bones, our muscles, our spines.  Her talk also included a rich net of references to Simonides, Giordano Bruno, Frances Yates, Giulio Camillo’s Theater of Memory, and more.

ALL THINGS BEING FRUGAL, STOP THE WAR

It’s fictive
of Course, but the thing was live and had its purpose, including unfolding time
which unfolds in time
but Destination recedes, is fugitive.

As all Else predicated on an absence of Representation We’re
moneyless equal in scale to memory.
As in forgetting, the Rain’s realness is an illusion.

Separation’s inevitable thus reflect on the usefulness of Civil wars and the neces-
sity of violent uninterventionist death.

Last, but certainly not least, was the always lovely and ever productive Thom Donovan, reading in part, from another new Compline Press book, complete with its own little burlap bag, The Hegemon Say, after Theresa Hak Kyung Cha.

And here’s a small section from Thom’s new book from Displaced Press, The Hole.

There is a lot going on with The Hole as a book. By including correspondence with friends and via other forms of address, the book queries, opens up the concept of the book, asking as Donovan writes, “How could the book reflect a form of collective reception, if not a truly distributed authorship?” (83). Thus, the book includes responses from CA Conrad, Judith Goldman, Brenda Iijima, Rob Halpern, David Buuck,  Andrew Levy, Robert Kocik, Eleni Stecopoulos, Etal Adnan, Jane Sprague, Jocelyn Saidenberg, Stephen Collis, Tyrone Williams, Dorothea Lasky, Dana Ward. 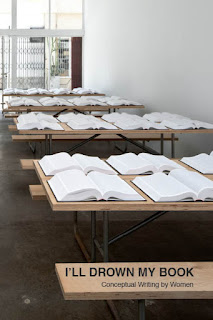 Vanessa Place presided over this event, introducing it by reading her Afterward.
Here’s an excerpt:

I have previously identified many forms of conceptualism, ranging from pure to the baroque. These are matters of form. I have come to consider conceptualism, qua conceptualism, that is, as writing that does not self-interpret, is not self-reflexive, at least not on the page. In other words, writing in which the content does not dictate the content; what appears on the surface of the page is pure textual materiality, no more (and often much less) than what you see on the surface of the page. Conversely, in the way of positive and negative space, conceptualism is also writing in which the context is the primary locus of meaning-making. I have written elsewhere that all conceptualism is allegorical, that is to say, its textual surface (or content) may or may not contain a kind of significance, but this surface significance (or content) is deployed against or within an extra-textual narrative (or contextual content) that is the work’s larger (an infinitely mutable) meaning. The white cube is only a white cube, the thin spindly thing a thin spindly thing. The thin spindly thing, however, may well be the tail of the elephant, which leads to the elephant’s tale. As Schopenhauer noted, Kant would have been better off had he explicitly denied objective existence to the thing-in-itself. In other words, it is better to begin conceptualization with that which lies within one’s own perceived experience. In other words, l’éléphant n’existe pas (446-447).

Accompanied by the discrepant (Dodie even stopped reading at one point to comment on it) rag time piano music coming from a place that shares a wall with ATA, each of the following readers read for three minutes and then read for another three from the work of a writer not present indicated by parentheses below:

ATA, like CCA on Friday night, was packed. It was a pleasure to hear so many voices and a range of work. Perhaps my favorite was when Jennifer Karmin passed out note-cards with questions on them and invited the audience to participate as she and Dana Teen Lomax and we the audience read from a Hannah Weiner poem. It was a fabulous strategy for rendering Weiner’s writing on the page into the audible and cacophonous chorus of overlapping voices.

Giovanni Singleton’s “untitled (bird cage)” also struck me as of late I’ve been thinking about birds, bird calls, Charlie Parker, and the “capturing” of bird calls/songs by professional and amateur ornithologists. This summer, Jonathan Skinner introduced me to the Macaulay Library which has a whole collection of natural sound recordings. You can check it out here: http://macaulaylibrary.org/

Giovanni’s performance of this piece traveled from its presentation in I’ll Drown My Book as a visual poem and a poetic statement about it, and so it is impossible to reflect it as it was performed, but here’s a small portion from her statement:

This work has the life and music of jazz saxophonist Charlie “Bird” Parker as its soundtrack. It is also a response to and dialogue with Paul Laurence Dunbar’s (1872-1906) poem ‘Sympathy’:

I know why the caged bird sings, ah me,
When his wing is bruised and his bosom sore,
When he beats his bars and hw would be free;

Dunbar’s poem also provided the title of the first volume in Maya Angelou’s series of autobiographies as well as her own poem of the same title:

The poems seek to posit the question of the source of imprisonment. Is it the bird or is it the bars of the cage? The three-dimensionality [of Singleton’s visual poem] also creates spaces between the bars. Is escape then possible? Who or what is jailed and who or what is the jailor? It perhaps is a matter of perception (202-203).

The videographer Kush came to this event with his aged mother who has, I believe, dementia. I would imagine that for out-of-towners, it is disconcerting or at the very least, confusing when an audience member begins to comment on or register a variety of sounds during readings. I think that Kevin Killian might have provided the 4-1-1 on the situation to Christine Wertheim before she got up and closed the reading with her powerful performance of her own and Jen Bervin’s and Cia Rinne’s work. I can’t quite explain why, but somehow, at this particular event, perhaps as at Poets Theater events,  Kush’s mother’s participation proved part of the conceptual backdrop of the performances.

Posted by Robin Tremblay-McGaw at 7:36 PM