Fraser & Oppen on the Same Day

All in a Day:
Saturday, December 10th found me at work on the main first floor reference desk at the San Francisco Public Library from 10-2 where I fielded questions about Laughing Sal, Bergman's Fanny & Alexander, and books about Russian spies while also watching numerous Santas troop in and out of the library's bathrooms. They were part of "Santacon," a pub crawl for people who, for some unfathomable reason, enjoy dressing up in holiday Chris Kringle attire. 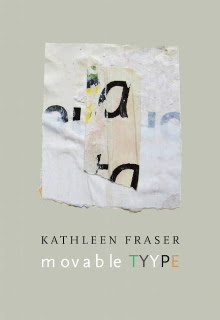 Then, off to a book party for Kathleen Fraser's newly published and lovely book movable TYYPe from Nightboat Books in New York. Hosted by Hazel White, the gathering was a pleasure. Jennifer Scappettone, Denise Newman, Susan Gevirtz, Steve Dickison, Bob Gluck, Peter Weltner, Michael Cross, Eleni Stecopoulos, Steven Gilmartin, Jamie Robles, and many others were in attendance. Kathleen read a generous selection from her book, about which Bob Gluck has written:

Kathleen Fraser never takes a short cut. In movable TYYPE she asks again, What can a poem be and do?--hanging words in the sky, opening the process collaboratively, turning the page into an environment, an installation. Intimacy is wedded to space and abstraction, and form itself is only a holding place in this spinning world. Her formal eclecticism becomes an expression of the mutability of life "in language under erosion."

Sometimes music takes the lead, "ear hinged forward." Fraser's musical syllables are not so much wrested from silence as they are examples of abundance, of fugal expectation. She casts into the world, tries it on: discomfort and pleasure, balance and awkwardness, trust and mistrust, presence and absence. The poems are not reduced essences but the multiplication of precise choices, including the typographic.

Fraser privileges attention a a gesture outward, even an offering. Precision becomes its own kind of emotion, a longing to be united with the world, to be carried up and held in the infinite patterning, and in that sense these poems are gestures toward connection and union (back cover R.Gluck).

Through the pull of collaboration with other artists and with the hours, hours' orologic, crossing languages and species of remoteness, Fraser's movable TYYPE searches time's keening in a material proliferation of Ys as the light (or bakelite shadow) from new coasts of Rome, observed, curves the march of extinction toward rescue instead: in lines exuberant, vigilant and cutting, recovering horizons of disappeared time with the hands (back cover J.Scappettone).

Entitled "20th Century," the first is comprised of the following pieces: "Orologic," "The Disappeared," "A whodunit, for Barbara Guest,"  "20th Century," and "Alice's shoe." The second section consists of Four Artist Books, texts in collaboration" --and a thrid section includes new work.

Signaling pleasure, play, and attention to language's materiality, the titles of pieces and sections in the book are an invitation to the curious reader. And while the economics of book publishing and the prohibitive costs of color reproduction prevent the visual art from appearing with Fraser's writing, the book does not disappoint.  movable TYYPE includes a big chunk of work produced in collaboration with Hermine Ford, JoAnn Ugolini, Gonzalo Tena, and Nancy Tokar Miller. Fraser uses cut-ups, found material, journal responses and a generous receptivity to error to re/work, re/think meaning, relation, scale, perception. I love how Fraser's interest in "extending the graphics of typography," is enabled by an interesting practice of sustainability. By this I mean, she finds a way to return to writing that earlier she'd given "up [on] and filed...away" (172), only to return to it anew "for the pleasure of re/finding the meanings which had compelled me on a scale of arbitrariness." About hi   dde  violeth   i ddde  violet, Fraser writes:

I worked non-stop, using every word, letter and punctuation mark in the original and static text. This meant doubling-up on some vowels or consonants and allowing intentional misspellings, the product of which quickly absorbed me in its inventive possibilities. I ended up with 31 texts that I hung--happily--along one wall of my study and invited an audience of 2 to "view" (172). 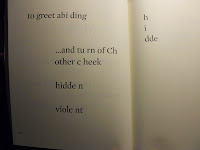 Looking for a deeply satisfying reading that will urge you to the page? Fraser's movable TYYPE is the book for you. 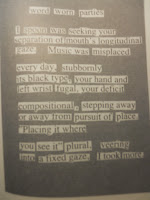 I scooted home to help my teenage daughter Alex with some review for final exams before heading out, a slice of pizza in mouth, to the Poetry Center's Oppen Memorial Lecture, featuring Peter Nicholls who dazzled all of us with his reading of impoverishment as a formal and political strategy in Oppen's poetics.

In one of his later poems, Oppen speaks of poetic language as, ideally, something "impoverished // of tone of pose." The lecture asks what might constitute a political poetry in a social order in which a literal condition of impoverishment obtains, and how in refusing to adopt any kind of "pose," a poet might provide an adequate answer to that question. (Peter Nicholls)

It is impossible to capture the outline even of Peter's engaging argument, but I've noted down some bits and pieces here: 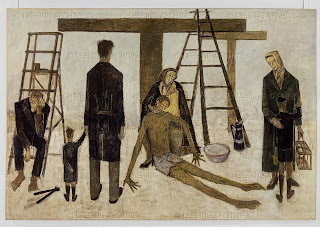 I think Nicholls was suggesting that Buffet and Oppen share similar projects. We heard Oppen's poem: ﻿
SONG, THE WINDS OF DOWNHILL

'out of poverty
to begin

of tone of pose that common
wealth

of parlance      Who
so poor the words


Reading "Song, The Winds of Downhill," Peter pointed out that Oppen here begins by quoting Charles Simic's poem "White" (which you can read here) and from there went on  to discuss the tension between poetry and politics in Oppen's work and life--given the well known fact of his hiatus from writing, or at least publishing, for 25 years while the Oppens were politically active and then for a period, living in Mexico.
Exploring Oppen's dialectic negotiation of Marxism and existentialism, Nicholls suggests that for Oppen, poetry must recover something to stand on, for being in the world and being political, which is, for Oppen, a mode of social being. Predicated on a "social vision" rather than a dogmatic politics, a poetics of impoverishment enables Oppen to work within the impossible confines of discourse which is already always being absorbed in order to test what a poem can do, even if failure underwrites it all.


We also read a portion of Oppen's poem, "The Book of Job and a Draft of a Poem to Praise the Paths of the Living," a poem written "in memory of Mickey Schwerner," one of three civil rights workers killed by the Klan in Mississippi. Schwerner had lived with or rented a room in the Oppen's home. Part of what Nicholls focused on here is Oppen's resistance to enabling some kind of easy identification with the victims as well as the poem's formal and tonal impoverishment, Oppen's refusal of metaphor (in particular places, I think) as an act of negativity.
In the question/answer session after the talk, Michael Davidson suggested that what Nicholls was describing might be related to Adorno's negative dialectics. In response, Nicholls suggested that in Oppen there is more optimism for Oppen seeks a kind of plenitude, but situates it on a different ground, in dialectic, in which nothing is left behind.
From The Poetry Center, here's a bit about Peter Nicholls and some interesting quotes both from and about Nicholls' work:


PETER NICHOLLS is Professor of English at New York University, where me moved in 2009 after many years at the University of Sussex in Great Britain. His publications, that emphasize connections between American and European poetry, and the political and economic dimensions of literary works, include Ezra Pound: Politics, Economics and Writing, Modernisms: A Literary Guide and George Oppen and the Fate of Modernism, as well as many articles and essays on literature and theory. Nicholls co-edited with Laura Marcus The Cambridge History of Twentieth-Century English Literature and with Gianni Cianci Ruskin and Modernism. He is US editor of Textual Practice, and lives in New York City.

“Oppen’s allusion to Blake... — ‘I must make no system, or I will be enslaved by another man’s’ — reflects his late fascination with Blake’s grasp of a vivid ‘actuality’ and his handling of the ‘little words’ in the Songs of Innocence and Experience: ‘Blake’s Tyger in the small words. They burn. The nouns are the visible universe, the night sky burning’. This ‘burning’ is the force of disclosure and revelation — the blazing forth of the ‘actual’ — but it is also, for Oppen as for Blake, a light which both illuminates and destroys, much as the divine creation gives birth to both the tiger and the lamb (‘One had not thought / To be afraid // Not of shadow but of light’.)...”
—Peter Nicholls, from George Oppen and the Fate of Modernism


“…the biography Nicholls is most interested in is not the record of the external events of Oppen's life, but the narrative of his intellectual and poetic development, and it's here that George Oppen and the Fate of Modernism proves itself most valuable. Simply put, as an account of the development of Oppen's poetics and of the influences on his thought, and as a series of illustrative readings of some of his most important poems, Nicholls's book is an exemplary piece of scholarship.” —Mark Scroggins

Posted by Robin Tremblay-McGaw at 8:57 PM