Celebrating the life and work of Steve Abbott 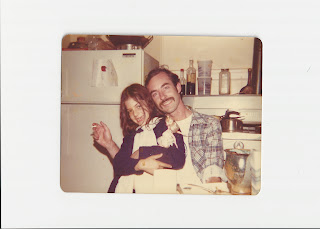 Sunday, November 6, 2011 Small Press Traffic continued its Fall 2011 focus on Bay Area poetry history with an event celebrating the life and work of Steve Abbott--writer, editor, hippie, political activist, cartooner, gay father, and all around rabble rouser. Abbott co-edited Poery Flash (from 1979-1984) and produced and edited 4 issues of the influential SOUP magazine. He was the first person to use the term New Narrative to describe the work of Bay Area writers Robert Gluck and Bruce Boone and he organized the historic Left Write conference in 1981. Alysia Abbott, Steve's daughter and muse/accomplice (and now writer herself) shared a moving collection of photos, writings, and anecdotes from Steve's life.
The afternoon began with an overview from me as I recounted my accidental encounter with Steve's work, how in the course of researching the Bay Area poetry scene in the 70s-80s, Steve's name came turning up.

The written record convinces me that Steve Abbott was an integral and important force in the Bay Area writing scene in the late 70s and into the 80s.

In his tenure as the co-editor of Poetry Flash, Steve was not afraid to take on controversy, to provide an arena for engaging in debates about the pressing questions of the time. Steve seems to have had an uncanny ability to read the contemporary even though as Gertrude Stein wrote,

Everybody is contemporary with his period….and the whole business of writing is the question of living in that contemporariness….The thing that is important is that nobody knows what the contemporariness is. In other words, they don’t know where they are going, but they are on their way.


As the editor of SOUP, Steve was on his way and seemed to have the ability to see that it was worth tracking some of the most exciting contemporary writing that was “on its way.” New Narrative found a home in SOUP as did Language Writing, including Bob Perelman's poem "China." (See Jacket Magazine here for Rob Halpern's insightful account of this important context.) Steve produced a number of special issues of Poetry Flash, including those on West Coast Black Writing (September 1979), American Indian Poets of California (October 1980), profiles of Helen Adam and a spotlight on the Grand Piano reading series (February 1981), Gay Writing (March 1981), and a focus on Poets Theater (November 1982).

In addition to running reading series, producing cartoons and journals, parenting, and more, Steve wrote a number of books including: Wrecked Hearts, Stretching the Agape Bra, The Lizard Club, Lives of the Poets, Holy Terror, Skinny Trip to a Far Place, and others. My favorite is the 1989 View Askew: Postmodern Investigations, a book that collects Steve's essays from The San Francisco Sentinel, The Advocate, Mirage, and elsewhere.  In it, Steve ruminates about life in the US, in the Bay Area, from the 70s and into the 80s; the book “documents the blurring of boundaries I’ve seen since moving to San Francisco in 1973” (Preface). It consists of three sections: Sexual Panic and the Arts, Mixed Messages in Daily Life, and Alternative Lives; and an epilogue about AIDS and the future entitled “Will We Survive the 80s?” The book also discusses performance art, Barbie dolls, phone sex, Stonestown, Kyoto condoms, commercialism (in an article in which he mentions angry protesters bombing the Bank of America (75)  I might add!); he writes about such various artists and writers as Robert Arneson, Steve Benson, Julian Schnabel, Bob Kaufman, Judy Grahn, Diamanda Galas, Odilon Redon, and New Narrative writers Bob Gluck, Bruce Boone, and also Dennis Cooper and Kathy Acker. I highly recommend it.

﻿﻿
﻿﻿
The question--will we survive the 80s?--was an urgent one. AIDS was devastating the gay community and the Bay Area generally. While Tom Clark and Ed Dorn created the "AIDS Awards for Poetic Idiocy" in the 1980s and "awarded," or rather, targeted Steve Abbott with one of these, Abbott in his epilogue in View Askew wrote:

To fight AIDS and the conditions that threaten us we need more than scientific research, more than money, more than leadership. We need to rethink America's spiritual, political, social and cultural systems at the most fundamental root level. How do we use power? How do we use language? It is clear that what we are doing now--as bosses and workers, as men and women, as gays and straights, as whites and nonwhites--is killing us all. And as we project these attitudes onto other species and towards the Earth's ecological system, we are jeopardizing our very planet. I would argue that today we can no longer afford to see anything--as a separate issue needing a separate cultural, political or spiritual agenda (173-74).

There's more to say about Steve and there was lots more said on Sunday. Kevin Killian read selections from Steve's work and Bruce Boone and Bob Gluck (via a letter read by Alsysia) shared some writing about Steve. Bruce noted Steve's childlike and vulnerable qualities, his nagging, mentioning how Steve introduced Bruce to George Bataille, a writer who would become very important both to Bob Gluck and Bruce. Bob noted that Lives of the Poets is his favorite of Steve's books, one that he and Bruce published in 1987 as part of their Black Star Series. Bob wrote that "...more than any of us, Steve was the exemplary New Narratrive writer, maybe because his Buddhism allowed him to empty without violence both fiction and lived experience."


It was a lovely afternoon with a standing room only crowd and Alysia Abbott held the crowd with her photos and stories of Steve's amazing life, a life that Alysia was made an integral part of--her work appeared in SOUP, she was taken to the One World Poetry Festival in Amsterdam and hung out with Richard Brautigan and had tea with William Burroughs. And when Steve was very sick with AIDS, Alysia returned from a life in Paris to take care of Steve until he died at the Hartford Street Zen Center.

I eagerly await the publication of Alysia Abbott's memoir Fairyland. Here's an excerpt she has generously shared with us.


My father was a rich man in Paris. In San Francisco we skimped and saved. No piece of furniture was bought new, everything found at garage sales or at a markdown somewhere, as were his clothes. But in Paris my father was loose with his Francs, buying me any blouse or dress that caught my fancy. “I like to see you in nice clothes,” he’d tell me as I posed and turned in front of the shop mirrors. We went out every night and he barely looked at the check before spreading his money like monopoly money across the tabletop.

And what he didn’t spend that week of his visit, he put in an envelope and handed to me before taking a cab to catch his flight home. There was a feeling that We’re in Paris. This world is not our world. This is not real money. Why worry? Let’s let the money go.

We met for a coffee at Place d’Abbesses in Montmartre his first afternoon in the city. I explained to him how it was cheaper to take a coffee at the bar than to sit at a table. I still was tight with money, still used to being a student. But he wanted to sit. His legs were tired. He was easily tired that trip. So we sat outside on the terrace. The summer sun was shining so every other seat on the terrace was taken. The cobblestone streets were stacked with parked motos, the vespas the young Parisians liked to drive, their high-pitched engines echoing through the narrow alleys and hills. We sat at Café d’Abbesses across from a blinking merry-go-round. The trees were in bloom. The air warmed me and I felt good.

Our plan was to walk up to Sacré-Coeur but Dad didn’t know if he was up for the hills and many flights of stairs. “It’s not far from here,” I said splitting a cube of sugar for my espresso. He sat tapping the saucer of his café crème with his narrow cigarette stained fingers.

I suggested we go to Musée d’Orsay, my favorite Paris museum the next day. That semester I’d studied 19th Century history and the realists Flaubert and Balzac. I enjoyed seeing the art of that period against the literary and historical context I now knew so well.

He spoke his words calmly as he sipped on his café crème. And for a moment I felt uncomfortable just as many times in my life, my father’s love left me feeling uncomfortable. The way, at thirteen, I reacted to him grinning at me with big eyes from across the dinner table: “What are you smiling at?” And he responded, “I’m just amazed that I’ve raised this beautiful young woman.”

His love surprised me. It could be jarring, because it always seemed to spring from nowhere, and certainly seemed to have no relationship to my actions. It was as though he loved me just for sitting there in front of him, before his eyes and returning his gaze, listening to him and speaking.

This was how he looked at me that day at the cafe. It was too easy.   (Alysia Abbott)

Alysia Abbott’s writing can be found at Time Out, Salon, and Babble and in essays about her relationship with Steve Abbott on Atlantic.com and in two anthologies: Out of the Ordinary: Essays on Growing up with Lesbian, Gay and Transgendered Parents, St. Martin’s Press (2000) and Only Child, Random House (2006). Abbott also maintains a web site about Steve here.

Thanks to Alysia Abbott, Kevin Killian, Bruce Boone, Bob Gluck, Jim Brashear for technical assistance, Kush, Samantha Giles of Small Press Traffic, and to all who came out for this event.
Stay-Tuned: Thirty years after the LeftWrite Conference: December 4th Kaplan Harris will talk with LeftWrite Conference organizers, Bruce Boone and Robert Glück to revisit some of the motivations, fractures and legacies of this seminal moment in Bay Area History.