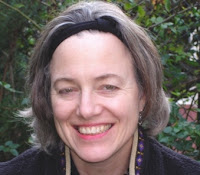 Theory.
The theory states that the perfect sentence can be made to
disappear by following a set of rules backwards. The theory
is a jar, and the sentence is a fluid which can be poured out. It
is part of your job to duplicate the theory indefinitely.

Breast-high partitions cover the linoleum floor, creating a
maze through which workers stroll and softly talk. At either
end of the vast warehouse are sealed rooms whose roaring
ventilation systems cool the computers. You are allowed in
these rooms, because you wear a special identification badge.
Between the computer rooms stretch two rows of windows,
that face twin lines of young olive trees whose leaves are
covered with fine greyish hair. Beyond these trees the work-
ers go to sleep and have sex.

You receive a letter from a man you haven't seen in years. "I
think of you fondly" he writes, and tells you about his wife
Melody and her recent miscarriage. You remember with pleas-
ure a pair of soft sandals and the notes he used to leave on
your pillow. The notes have fallen out of the journal you
stored them in, or the journal has disappeared.

"It's happened already," you complain to a co-worker. "First I was a young
girl and now I'm a 'woman with a past'."

Your response time slows. For the first time you experience fa-
tigue because the literal size of your understanding has in-
creased, and other workers have begun to line up with ques-
tions. The answer to the latest question requires a flow of
logic outside your control. You close your eyes and your under-
standing settles over the problem like a falling tissue. A sul-
len crack reveals itself, a niche of wrongness. You announce
your discovery, and the questioner goes away.

You are lying side by side when she lays a hand on your sore
breast. "You enjoy leaving me in the lurch," you complain.
"No I don't," she says. As you lie quietly askew there is
something tropical about your half-hold on sleep. Finally she
says, "Tell me you never want to see me again."
You say "I never want to see you again."
"Don't say that." Her voice is so small you can hardly imag-
ine her lips moving in the dark.

You pass a nil index to a routine which causes it to indiscriminately gobble
up the symbol table. You watch, drinking tea with milk and sugar, as a ser-
ies of fatal and non-fatal errors occur.

The grated parmesan is as soft as flour, and radiant on a
white saucer. This happens whenever she abandons you and
the hours go by in which you could have had her. You feel
lit up, uncontained. On the street bodies which fix your desire
dissolve past the hard edge of your eye. Everyone looks hol-
low. The background is a vivisectionist, a series of lacerating
points in a fluid. Laminating.

Sometimes the work demands great agility and you feel you are twisting
and shaking while remaining mute. You and another worker do this
in front of one another, a demonstration of technique, as you have
learned the facts intimately and can now walk upon them. There is
a tangle of questions all over the floor, stepped upon. In the corner
of the cubicle lies a briefcase, and upon it is a blueprint with one
corner ripped. Therein lies a solution, you think. The engineer folds
up her eyebrows and walks away with the briefcase.


I wrote this piece from notes in my journal composed on the one-hour commute down Interstate 280 to and from work. That time is nothing time, a period before & after transformation by work, a period of silence, dissociation, minor playfulness on the page. What happens at this border truly doesn't "matter," because it doesn't occupy "time."

But down there, where I am an engineer in the suburbs, I feel I have to not only speak a different language but become one. I am translated. The notes I take in the commuter van are the notes of a woman becoming a different language. Further, my work involves computer languages, which themselves are a sort of translation between a formal logic, expressed in sentences, phrases, paragraphs, and a computer performing tasks. But what is left over, surplus, both unwanted and autonomous, is the sexual. Eroticism as a non-reducible term (or ghost? in a [missing text]


See the poem in HOW(ever) here:
Posted by Robin Tremblay-McGaw at 6:26 PM