Tuesday was a crazy day for me, running from one thing to another, but it was gloriously sunny after weeks of rain here in the Bay Area. An hour before I was to leave to venture across the Bay Bridge to hear M. NourbeSe Philip read at Mills, I got a call from Sally Doyle and invited her to come with me. Our afternoon impromptu adventure entailed getting a little lost on the serpentine drives through the pastoral campus of Mills in Oakland. Who knew it was such a lovely campus, even if the bell tower across from Mills Hall where Philip read is a little tacky, a tiny version of a monumental bit of architecture, a cracker jack toy (though I will concede that the sound of the tolling bells in the background of Philip's reading was eerily apt).

We arrived right behind Erika Staiti and Cynthia Sailers, Samantha Giles, following us, just minutes before the reading started. The room was hot and packed with one of the more diverse poetry audiences I've encountered in a while. 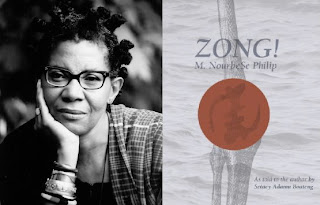 Juliana Spahr introduced Philip, noting that Philip's book Zong! is one of the most provocative and haunting  that Spahr had ever read.

I have not yet read Zong! in its entirety though I long to. Sadly, it is difficult to get. The local and consortium libraries from which the San Francisco Public Library can borrow don't own it. I've tried to borrow it from friends, some of whom lent their copies to others and never got them returned. You can read excerpts printed prior to the book's publication in various places, such as here at Fascicle. and here at Facture. It is also available in boundary 2 (2006) but to access it online you have to have a subscription.  You can buy the book here.

Zong! is a book created using constraint. Philip, who is also, I believe, an attorney, used as a source text  the legal document Gregson v. Gilbert which details how the Captain of the slave ship Zong threw overboard 150 slaves in order to collect insurance money. From this text which excises the horror and trauma from the historical fact, Philip used its 500 words to create what she calls "dictionaries," lists of words that she has then written notes and comments on. Culling from her dictionaries, she wrote Zong!

Interestingly, she discovered that the white male European voice (the writer of the legal document, I presume) comes through her text. At the same time, the language of her text bodies forth the pain of the murdered Africans. Language opens, is flayed, tumbles about in a slow cacophony of syllables, bits of (I presume) various African languages, disintegrating English, language and human beings swallowed and suppressed by water, legal discourse, privileged subjects.

NourbeSe Philip's reading was transformative. In the Living Room of Mills Hall, she arrested us, held us suspended in sharp and rapt attention, which several audience members called trance-like. After her reading, Philip mentioned the evolution of the work not only on the page but in performance, noting that she has come to score the silences, and indeed I felt that. The careful articulation of sound and silence.  I have the sense that the earlier versions of some of the Zong! pieces published in the places noted above don't quite capture how the work has evolved and is probably printed in its book form. Philip pointed out that as the printed version developed, she made a point to insure that no words or clusters of words were located directly above others, as the words (like the slaves drowning in the ocean) "are all seeking the space/air above." She also explained that as she reads/performs this work, a work which in some ways can't be written or performed, a story that cannot be told, she has allowed herself to improvise, to read whatever words and phrases her eye falls upon, so that the reading and the text are different every time.

As I said, her writing and reading brings forth the body, linking language and the human body and the violence enacted on it, marking that which the law denied: the fact that Africans were human beings not things. In her pieces published in Fascicle, Philip writes that:


In its potent ability to decree what is is not, as in a person being no longer human but thing, the law approaches the realm of magic and religion. The conversion of human into chattel can be considered an act the equal of transubstantiation which converts the eucharistic bread and wine into the body and blood of Christ.

NourbeSe Philip's Zong! attempts to use the law's denial of its own recourse to magic and religion not to restore the facts or experiences of those on board and those thrown overboard--since that seems impossible--but to raise the spectre of what the legal text buries, what happened to the 150 human beings murdered for profit.

The writing we heard Tuesday was mesmerizing. I can't reproduce the text here faithfully because I have not seen it and had I, I still could not score it as it was read, because the reading departed from the text. But some evocative pieces, some shards that stood out include these:

the sum of Negroes
over
board

the rest
exist
ed
not

suppose
the law
is
not
does  not


suppose the law not

suppose the law
a loss

no one bears witness
for the witness


Of course, these line breaks are wholly inadequate and inaccurate. These are recorded lines as I heard them, but I can't capture here the sonorous tangling and disentangling that Philip channelled with shards of languages, with moans and resonant hums that almost felt like they were inside us.
Amazing work.

Here's what Cristanne Miller has to say about Zong!


“Zong! pushes its readers to understand the Zong incident in the complex contexts of both African spirituality, languages, and regions and the British (Western) slave trade and law, with its assumed racism yet sincerely attempted pursuit of justice. The poems work powerfully at the individual level and even more powerfully as a sequence to call attention to the scantiness of our knowledge of the history of African enslavement from any perspective but that of slave holders or legal documents and to question the assumptions about ‘fact’ and ‘value’ assumed by that perspective. Like reconstructed archaeological shards, Philip’s poems give us pieces combined in different orders and to different effects, building a story in such disjointed terms that it implies the tale cannot be simply known or told. As Philip herself says, she is finding ways ‘to “not-tell”’ the story of the Zong—just as Toni Morrison both relates Sethe’s story in Beloved and declares ‘This is not a story to pass on.’”—Cristanne Miller, Edward H. Butler Professor of Literature, University at Buffalo SUNY

You can read a piece about Zong! by Kate Sutherland here.  You can visit M. NorbeSe Philip's web page here.
Posted by Robin Tremblay-McGaw at 10:51 AM