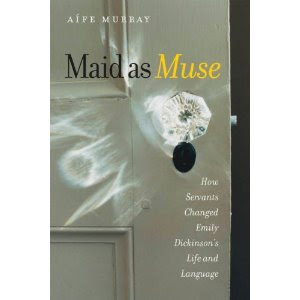 When Harreytte Mullen, at Small Press Traffic, recently gave a talk about the challenges and trauma of exploring her own genealogy, Kevin Killian asked Harryette if she knew about Aífe Murray's Maid as Muse: How Servants Changed Emily Dickinson's Life and Language. He recommended it. Intrigued, I got the book from the San Francisco Public Library, and then was unable to put it down! What a fabulous read.

Murray's book begins with a quote from Ralph Ellison's Going to the Territory:

Having had no adequate models to guide us [as Americans] in establishing what we told ourselves was to be a classless society, it has often been difficult for us to place people and events in proper perspective of national importance. So it is well that we keep in mind that fact that not all of American history is recorded. In some ways we are fortunate that it isn't, for if it were, we might become so chagrined by the discrepancies which exist between our democratic ideals and our social reality that we would soon lose heart. Perhaps this is why we possess two basic versions of American history: one which is written and as neatly stylized as ancient myth and the unwritten as chaotic and full of contradictions, changes of pace and surprises as life itself....Surely there must be some self-descriptive magic in this, for in spite of what is left out of our recorded history, our unwritten history looms as its obscure alter ego, and although repressed from our general knowledge of ourselves, it is always active in the shaping of events.

Murray's Maid as Muse undertakes to explore some of this unwritten history. Wondering "who made Emily's prolific writing life possible" (3), Murray goes on a scholar and writer's journey to explore why, "despite references in Emily's letters [to servants]and scholar Jay Leyda's tribute to them, the Dickinsons' servants were all but ignored in biographies and critical works" (4). Murray discovers that,

when the family employed a maid, Emily wrote more. There was a sharp upswing in her creative production after the long-term permanent maid, Margaret O'Brien, was hired in 1856. For the next nine years the poet steadily turned out some one hundred to three hundred poems a year. With Margaret O'Brien's departure, Emily's output dropped to ten poems the next year. Manuscript scholars thought her great poetic 'drive was spent.' I determined that the numbers stayed similarly low for three and a half years of intermittent maids until Margaret Maher was wooed to the household in 1869. For the rest of her life with the second Margaret (whom the family took to calling "Maggie") until her final illness in 1884, Emily steadily averaged about seventy-five poems and letters per year. Having a permanent maid created opportunity that enabled Emily to identify herself as poet (10).

But Murray's book posits more than this assertion as she seeks to locate Dickinson and her work and the work and lives of the servants with whom she came into contact in their specific social context. Murray tells how two prominent Amherst families--the Boltwoods and the Dickinsons--"staged a many-month tug-of-war over [Maggie Maher's] services" (29); how it was Maggie that Emily was closest too; how it was in Maggie's trunk that Dickinson stored her fascicles, her bundles of finished poems; how Maggie was instructed to and then refused to burn Emily's poetry at Dickinson's death; how the various versions of English that Emily would have heard, including African American vernacular English and the Hiberno-English of Irish immigrants impacted and shaped Dickinson's linguistic experiments.

While there were Native and African American people working in and around Amherst and the Dickinson Homestead, Murray posits that it is the influence and intimate familiarity with her Irish immigrant servants, particularly the maid, Margaret Maher, and long-time Dickinson familiar Tom Kelley (who worked for the Dickinsons for many years and was the chief pallbearer, one of six Irish Catholic immigrant laborers Dickinson requested to carry her coffin at her funeral) that seems to have most affected Dickinson (though Murray also traces the influence on ED of African American speech patterns). Careful to attend to the lives of these individuals (by having done exhaustive library, archival, and in-person sleuthing with descendants and town historians) and mindful of the complexity of Dickinson's shifting prejudices and racism, Murray also provides a rich and engaging examination of a variety of individuals while also revealing the formidable challenges faced by those engaged in various forms of service in 19th-Century New England.

How did Emily trade on skittishness about her place in the hierarchy to slip in and out of social view or resist poetic or linguistic categories and categorization? To leap boundaries even as she constructed them--to let the Kelleys or Matthews in but keep the "new Black man" (JL 721) out--to refuse adherences to form and genre (which, as composer Gil Evans once pointed out, is a 'merchandiser's problem, not mine') was part of her process. She opened herself to eclectic influences, crisscrossed boundaries, used her privilege to control and challenge as much as she parlayed the means and authority achieved in one artistic medium to another. It should not surprise readers that her politics were conservative but her poetics were not; that she disdained the African American gardener in the 1880s but wrote stunning antislavery verse in the 1860s. She was a figure of her time and class. That she opened herself, indeed, was changed by her close association with poor people working with and around her, is not surprising. She didn't shed her privilege but wore it comfortably.

Where does "the servant's hand" come in? Where does it get pushed away? What is to be made of the fact that Margaret Maher preserved the work in her trunk or saved the poems destined for destruction? As people investigating artistic motivation and process look around the writer's room, they are not just communing with the author and the view from the windowpane over the writing table. There was a woman leaning over the grate and some chance remarks that seeded an idea for a poem. All those quotations in the poems suggest engagement, ongoing conversations, and inspiration from the social world around her as much as the written world she inhabited. That 'social text,' that fleshy real world was inhabited by maids, laundry workers, seamstresses, blacksmiths, tinsmiths, basket weavers, laborers, stablemen--all of whom Emily knew by name. The poet may have traded on stereotypes (what Folsom and Price call vortex words) that telegraphed charged images to her readers. What's to be made of Emily's relationships to the people behind these stereotypes? This was the social context of her art-making, the whole roster of people who make the work possible and 'fuel the fantasy of independence. Ironically, it is this very support that allows the practice of art making to appear as the ultimate expression of individual freedom.

Emily's language was affected by Mrs. Mack's and certainly by that of other servants with whom she regularly spoke or listened to intently. The queen of mimicry took an improvisational page from her servants' books. Even her genius for ambiguity could have found influence among servants for whom the art of evasion and ambiguity were part survival strategy and, at least in the case of the Irish, part of their legal tradition. Genius is believed to be solitary. What would it mean to rethink a body of work--in this case reread poems for class and race--in light of the way Emily's daily life was shared with the working poor of the town?

The intimacy of small-town life, its ebbs and flows, dramas and controversies, as well as the intimacy of domestic service, meant that Emily Dickinson was interwoven with Amherst's poor white Yankee community, the entwined Native and African American one, and enclaves of Irish and English immigrants. In the brief glimpses offered, the men and women who spent some of their working lives in and around the Dickinson family are at least partially restored to the written narrative. Whatever their roles at the Homestead and their closeness to the poet, the maids and laborers come from the silent wings until it is so crowded onstage that we wondered why we hadn't seen them all along(215-218).

While I found myself sometimes wishing Murray would have stopped and spent additional time and space reading more closely, in light of the various linguistic influences she enumerates, some of Dickinson's poems, I can't complain. This doesn't seem to be the main goal of the book. Rather, it provides a speculative, complex, carefully researched and richly imagined tapestry of intertwined lives and the wild poetry these lives made possible.

Far safer, of a Midnight Meeting
External Ghost
Than its interior Confronting--
That Cooler Host.

Ourself behind ourself, concealed--
Should Startle most--
Assassin hid in our Apartment
Be Horror's least.

The Body--borrows a Revolver--
He bolts the Door--
O'erlooking a superior spectre--
Or More--
Posted by Robin Tremblay-McGaw at 10:38 AM

Thanks. I read the recent Dickinson bio "My Wars Are Laid Away in Books," the first ED bio I've attempted. While it was interesting I rarely felt it gave me a new way into Dickinson's work. Good for Murray in looking at some of the other invisible people in ED's life (other, I mean, than herself). Sounds like an argument worth the reading.

So exciting to see the myth of the Solitary Poet given a critical reading.

Thanks for your review and a heads up on a book to add to my list of Must Reads.