to gallop to skip to turn and run: some poems by Emily Abendroth 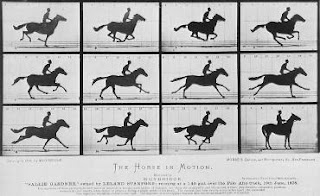 The Walk & The Amble

clocked at midlope, every mare facilely unropes
any strict predictions of flight, unleashing
locomotion like a prestorm hushponcho
the full gipper of precipitation still on the lamb

arching a clipped hoof skyward, it clops down
impounding in puddle a cloud bank, a cone of error
or leaps a brick niche in furclad furor driving
its own warm hide by slack over rocketing strides

the slow open gammed gait of an aggregate body
unabated gives birth to a warren of rabbits, a boon
whose exiting bushels of sallying tushes
usher a second degree prickliness in the orfice
each shuttlecock forthing undocked as if by schooner
a knotted shock of downy assets leaaving the bloomers

the suckel-sated nestmates bivouaking nightly shore
up a shelter girded by their own interlocking appendages
an ecstatic but nodding combobulation, a quixoddity
dressing this thick mess of drowsy possibility
they are sedge-browsers as well as perambulators
ample in coniferous intake, sampling by mud-flanked rudding

and here the pathway to the scissoring extremities
begins at the shammy lapped hindquarters
begins taking stock of what one notices
searoar wordspoor umlautdrum
an amble as twice sprung maelstrom
whose sound is abscounded but movement
lashing, four flyway wind currents concurrently

thrashing a field of addled cattle, their surefooted
and peculiar brattlings riding the hammerdressed dare
the earth you miss while the foot bobs in air


The Canter & The Transverse Gallop

a dank hunk meets one damp hump
and jubilant they schmooze, warp apart
artfully outstrip any gleaning eyes only
to reconnoiter via adroit canticles
fiercely groping each others crops
gamboling off, adducing across the sluices
a soppy course of reciprocal limb action

while elsewhere and solo a route-spurned
racking pony urgently performs its willed
wiliness, totters at half stride in a quicksilver
instant of cliffside bafflement, favoring
the shore forefoot to rehook its course
although consequent hoovefallings find
the unabashed poles of another felt hunger
hunkering in

here amidst the peat-sweating eskers of bog ash
it takes a couple diggers, skids its tracks
tries not to be fearless but recognizably seared
nicked about and yet still leaning forward, as if
sensation were volition itself and imagination
not for the stinting, but sprinting rather

until into panting speed, it oftens the thinking
underlain and most swollen within, tickling
the leonine termperament of our peculiar
a hot minion of still belching waters
a lateral spread, a surfeit of seeing's clinamen
its subjects already and inevitably exceeded
even as in the process of being constituted

such a picture lacks certain necessary uneasinesses
the proposed deoccupation of effluvium itself
an apogee of lavishly collapsed containment
strategies, its objects exuberantly
overlapping one another as a dog laps
rapturously slurping at the agitated froths
couthlessly tapping their propulsive forces
sources via wild budtongued nudgings


Emily's chapbook includes several epigraphs. I thought I would reproduce them here:

"If it is impressed on our minds in infancy that a certain arbitrary symbol indicates an existing fact, if this same association of emblem and reality is reiterated at the prepatory school, insisted upon at college, and pronounced correct at the university, symbol and fact-- or supposed fact-- become so intimately blended that it is extremely difficult to dissociate them, even when a reasoned and personal observation teaches us they have no relationship.

So it is with the galloping horse."---Eadweard Muybridge, Animals in Motion

"all that goes before--the words, the rain's small pellets
small fountains that live, the face of the water, dilations
the heart of the republic--are the subject of the
verb skips..."---George Oppen, Selected Letters

"In the vicinity of Mt. Saint Helens, a Bigfoot beckoned to a person who responded by turning and running." --Oldest known West Coast Bigfoot Record, dating from the 1850s, as recorded on a Posted Chronology of the Willow Creek Bigfoot Museum, CA

to gallop to skip to turn and run
Posted by Robin Tremblay-McGaw at 10:26 AM