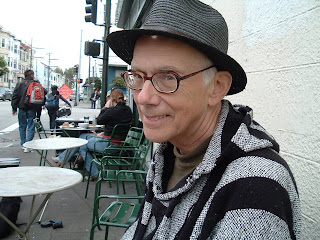 The Truth About Ted: An excerpt from Carmen is a story about storytelling, desire, interpretation, reading and misreading. The narrator, “Bruce” tells a retrospective series of stories about a community of gay men who encounter Ted, a young man who is “straight, but [whose] brand of sociability really suggested something more like camp” (1 [unpaginated]). After cataloging a series of readings of Ted’s life–“He hung out with gays almost exclusively. He looked gay and acted gay. He talked gay even” – the narrator asks “So why wasn’t he gay?” (1). Ted becomes an object of gossip for the community as they try to interpret his conflicting messages and their conflicted readings of his sexuality.

The reader is strung along in this text as are the community members. Is Ted gay? Straight? The relationship of epistemophilia to erotics, seduction, reading and interpretation is literalized in the text. The Truth About Ted ends up being about the truth about Bruce, or the truth about stories and their relationship to life, or the truth of the self’s continual misrecognition of its own specular image, or the ways in which the subject is caught up in the cogs of narrative, language and desire. Here, the mirror of the story suddenly turns on its author and readers. It reveals a reflection that isn’t so much Ted’s story, but is the community’s, Bruce’s, and the readers’. If at the close of the story’s first paragraph we read: “It’s his life, after all, not yours” (1), by the end of the piece, we discover that perhaps it is not Ted’s life, but Bruce’s and maybe not Bruce’s but ours.

Gail Scott read next from a new yet-to-be-published-manuscript titled The Obituary. This text traces the repressed native in her family history--something that is intriguing to me as I am working with this repressed and erased (for generations)native history in my own family via a writing-through George Oppen's Of Being Numerous. Gail's piece complexly flays and sutures language as it traverses various characters--an old gendarme in a stairwell and his young apprentice who watch a woman, Rosine. Rosine is mostly a face in a window and sometimes a (male) fly. There are also shale pit workers and a politically correct lesbian historian. French, Cree, English and various discursive registers soar, collide, and re-form. There are the Métis (Fr. "person of mixed ancestry"), footnotes and voyeurism. Stairwells. A linguistic kaleidoscope.

Some lines I jotted down in the half-dark include:

"a hybrid rising out of her dichotomies"

But the pen can't keep up with the ear and the desire to hear the way Scott orchestrates language--both tensile and capable of astonishing and dangerous leaps and turns--led me to abandon myself to the thrill, to the pleasure of it--arabesques, near crashes, tender glissades.

Writing from a different geography, but one also profoundly shaped by histories of colonization, Scott’s writing reflects a preoccupation with cusps and peculiar fusions. Her new novel, The Obituary, investigates the necessity and impossibility of dwelling in such sites. Varied and repeated rituals of contact reverberate at the level of the sentence as French expressions seep into English and English dialogue is delivered carrying traces of an Algonquin language. There are many layers and forms of contamination here; Scott has no investment in purities of grammar or genre.

To be clear, neither Philip nor Scott are exclusively interested in recovering histories that have been placed under erasure or crafting narratives that seek to reify fixed identitary positions. Rather, both writers recognize that colonization naturally gives rise to all sorts of fractured subjects, hybrid forms and polyvalent linguistic registers. By coincidence, their contributions to this volume even share some notable similarities. In their new novels, both writers appropriate popular cinematic and literary genres (Philip adopts the mystery novel and Scott uses film noir as a template). These popular genres are brought into contact with linguistic practices and forms filtered through oral traditions and with discourses pilfered from the ubiquitous canon (Philip’s novel is framed by an epigraph from The Tempest; the section of Scott’s novel included in this volume recasts lines from Macbeth). In the way that contact zones often foster narratives marked of interruption, collision and perverse confluences, these texts raise essential considerations about the overlaps between avant-garde writing and some of the other places where fragmentation, parataxis and disjunction are commonplace, and linear narrative and singularity of voice are difficult, if not impossible, to sustain. Perhaps, these surprising parallels reflect the fact that both Philip and Scott write from places where it is more difficult than it is here to ignore the prevalence of such overlaps, reminding us that the centre of Empire has never offered the most critical vantage point. I welcome them to the Elders Series as fellow travellers, and as writers whose work has consistently demonstrated to me the immense possibilities pried open when familiar forms and rehearsed paths through the sentence are ruptured. --Kate Eichhorn March 2009, New York City

All in all, an evening to remember. Two amazing and distinctly different writers.

Gail Scott's bio (from Belladonna):
Gail Scott is the author of 7 books, including an anthology, Biting The Error, co-edited with Bob Gluck et al, My Paris (Dalkey Archive), Spare Parts Plus Two (Coach House), the novels Main Brides and Heroine, and the essay collections Spaces Like Stairs and la théorie, un dimanche (with Nicole Brossard et al). She is co-founder of the critical journal Spirale (Montréal) and Tessera (new writing by women), teaches Creative Writing at Université de Montréal and has recently finished a radio play, “Werther Lives”, and a new novel, The Obituary. 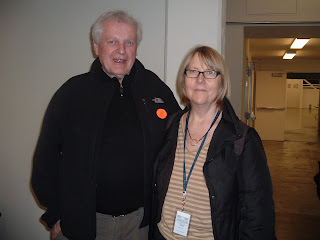 Some photos from the night:
John Norton and Dodie Bellamy 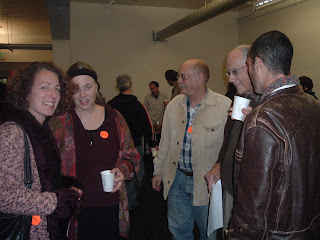 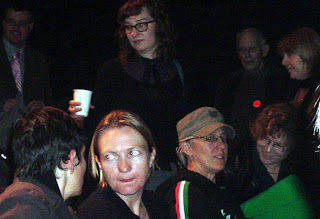