By 1979 I was done with school and trying to figure out what to do with myself. Should I move to Vermont and join the Bread & Puppet Theater Company, as my college acting teacher had advised? Or get more involved with practice at the SF Zen Center, in spite of the martial tone that prevailed there. I applied for a Fulbright to study music in Bali, and while waiting for my free ticket in the mail I learned a few banjo tunes and cast about for a DIY theater project. I was living with Eileen Corder on York Street off 24th. Tinker Greene’s brother John had the Studio Eremos space in Project Artaud, and he let us rehearse and perform there for free, maybe we collected a little money and gave it to him but basically this was off the grid.

Carla Harryman and Steve Benson and I had done a one-night performance of Frank O’Hara’s Try! Try! at the Grand Piano, but Eileen and I had bigger ideas and wanted to do plays like we’d been doing them for the past 4 years in college in Michigan and Santa Cruz – real productions with rehearsals, direction, sets, costumes, lights, multiple performances. The poets were ready. I don’t remember having any trouble getting people to commit to 2 or 3 nights of rehearsal per week for a month or more, and a couple weekends of performances.

We’d show up at the studio around 7:30 and the actors would trickle in from their day jobs, or just from their days. Sometimes they’d already be in character. The dreamer, the bad boy, the cranky kid, the con man, the princess. Everybody seemed to have a shtick.

I didn’t have much idea of poets theater except I knew I didn’t want it to be like a staged poetry reading where everybody would just stand around and read their lines. I wanted something to happen between the actors, and I wanted that something to be expressed physically. So I leaned on what I’d learned from improvisational theater, much of it non-verbal – Viola Spolin theater games, 60s NYC experimental theater exercises a la Open Theater, El Teatro Campesino improvisational exuberance, Grotowskian plastique exercises – and I just started throwing it at the poor actors who probably wondered what any of it had to do with the script. But they stuck to it and let me lead them through all sorts of physical and vocal experiments. After a while they started to enjoy it, and then they started to play together. When I saw this I knew that I could start giving them lines from the script. As soon as they got their lines they’d stop playing together and start “acting”, which would be terrible, so I made the improvisations more structured and demanding so they wouldn’t be able to resume their habitual shtick, even though they wanted to. In this way, at times, the actors would surpass themselves.

Of course I tried to focus and score the improvs into a kind of physical/vocal/emotional subtext that bore an intentional relation to the text, but with texts like Third Man, Particle Arms, and Collateral (which Eileen directed) there was a lot of leeway for defining that relation.

The results? Mixed. There was a lot of excitement. We had big crowds. People laughed and cheered. Everybody learned something about the processes of making theater. Some of the writers plowed that knowledge back into their work which it continues to inform to this day.

It went on like that for a few years. When it ended for me (“… and so castles made of sand…”) I was still trying to figure out how to bring all the elements together in a dynamic and vital balance. Each time I watched a rehearsal or performance was a new chance to notice what was really happening between the actors and the text. That was the part I enjoyed the most. So it’s with pleasure that I join you for a viewing of selections from plays done by SF Poets Theater nearly thirty years ago.

Original manuscripts, correspondence, audio and video recordings, photos, programs, posters, and director’s notes to the productions are housed in the Henry W. and Albert A. Berg Collection of English and American Literature at New York Public Library at 5th Avenue and 42nd Street.

Nick Robinson lives in Albany, California, works as a librarian at UC Berkeley, and plays in several Bay Area string bands. His group the Ragtime Boyos will perform Sunday September 14 in the Berkeley Old Time Music Convention Cabaret from 3-6pm at Jupiter in Berkeley. Check out their video. 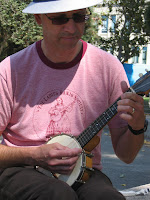 Posted by Robin Tremblay-McGaw at 4:13 PM