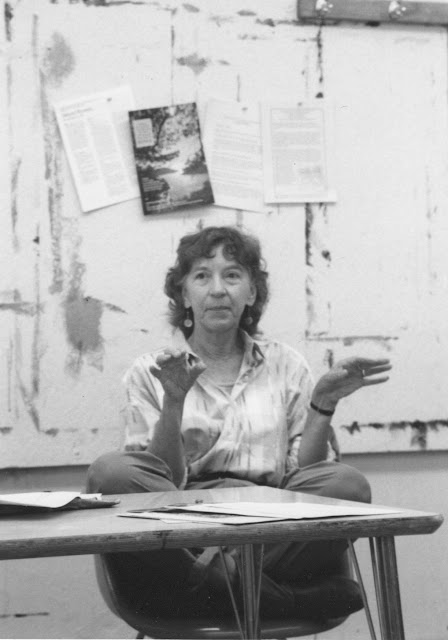 Leigh Hyams
1926 to 2013
Leigh Hyams (Martha Mae Nickerson), age 86, passed away on Tuesday, March 12, 2013 at her home in San Miguel de Allende, Mexico, with her children by her side.
Born in Papillion, Nebraska on April 22, 1926, she was the daughter of Mae (Baxter) and Ralph Nickerson She decided in the third grade that she was an artist and never wavered from that conviction. She studied art at Joslyn Art Museum in Omaha, earned a B.F.A. at University of Nebraska-Lincoln, and an M.F.A. at University of Guanajuato’s Instituto Allende in San Miguel de Allende. She did post-graduate work at New College Fine Arts Institute in Sarasota, Florida, where she had the honor of being studio monitor for Philip Guston.
Over the years, her painting subject matter ranged from European megaliths and Mayan temples, Brazilian rain forests and Yosemite waterfalls, to giant images of imaginary flowers, Mexican folk art, dogs, cows, and her family. Her work was distinguished by an edgy line quality and luminous color. She said she was driven by “a passion for what frees us, makes us aware of a deeper reality, and brings us closer to the universe around us and the one inside ourselves.”
Her drawings, paintings, and artist’s books are in the permanent collections of the Achenbach Foundation in San Francisco’s Legion of Honor Museum, San Jose Museum of Art, Oakland Museum of California Art, Des Moines Art Center, Joslyn Art Museum, Palácio Imperial in Curitiba, Brazil, and University of California at Irvine, as well as private collections in the United States, Europe, and Latin America. Her museum exhibitions included solo shows at the Paco Imperial Center for Contemporary Art in Rio de Janeiro, Brazil, and at El Museo de la Ciudad de Santiago Querétaro in Querétaro, Mexico. She was represented by Meridian Gallery in San Francisco, California.
She was a Fulbright scholar, having received a Western European regional research grant for her series of paintings based on Megalithic sites, as well as the recipient of ten painting fellowships, including Yaddo, MacDowell Colony, American Academy in Rome, and George Rickey's Hand Hollow Foundation. She served as founding executive director of the Djerassi Resident Artists Project in Woodside, California.
A beloved teacher, she worked as an adjunct professor of art at San Francisco State University, San Jose State University, John F. Kennedy University, California College of Arts and Crafts, and University of California at Berkeley Extension. She taught art in mental institutions, Athabaskan Indian villages in Alaska, and at retreat centers in exotic locales, among them Esalen Institute in Big Sur, California, and La Serrania in Mallorca, Spain, for a devoted following of painters from around the globe. For many years, she also led international art tours for the San Francisco Museum of Modern Art.
She published a book about her artistic journey titled “How Painting Holds Me on The Earth: Writings of a Maverick Painter and Teacher” and produced a half-hour video about her teaching philosophy titled “Making Marks: On the Excitement and Importance of Making Art.” For more information about her work, see www.artsreal.com.
She loved to travel. Her first husband, Robert Bolling, was a Navy pilot, whose work led them to live in Hawaii, Alaska, Texas, and Rhode Island. She divorced him when their sons, Kris and Jan, were little and moved to Mexico, where she lived for four years before marrying artist Ralph Hyams, who had two sons, Charles and Nicholas. They lived in New York City and later in Sarasota, where they ran the education department at the Ringling Museum of Art. The couple had a daughter together, Gina.
When she divorced her second husband, she changed her first name from Martha to Leigh and moved with her young daughter to San Francisco. She never had much money, but she managed to take many trips to Europe, Central and South America, and the Caribbean, as well as to India, Russia, and South Africa. She also enjoyed dancing and singing, doing yoga, reading thrillers, and eating Snickers candy bars. She spent her last dozen years in Mexico, where she relished the colors, sunshine, and humane pace of life.
She was predeceased by her son Jan Bolling and stepson Charles Hyams, and leaves behind her sister Joan Prior, son Kris Bolling, daughter Gina Hyams, son-in-law Dave Barrett, and granddaughter Annalena Barrett.

Posted by Robin Tremblay-McGaw at 1:51 PM