The Swerve and Sting of Lisa Robertson's Magenta Soul Whip 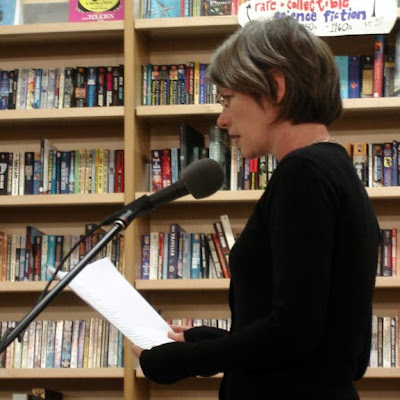 Soon, I want to tell you about the reading and conversation between Charles Bernstein and Norman Fischer I attended at the Jewish Community Center in San Francisco last Tuesday, May 11th. First, I feel compelled to tell you a bit about a book that has made a breach in that plan. Lisa Robertson’s Magenta Soul Whip, published by Toronto's Coach House Books, is an elegant volume in every sense. It is a sleek 7 ¾ by 4 ¾ inches, covered in chartreuse paper with silver embossed lettering. On the front: LISA ROBERTSON’S MAGENTA SOUL WHIP and on the back, a line from one of the poems, MY FIDELITY IS MY OWN DISASTER. 101 pages. The writing inside is a mix of lineated poems and prose pieces, some of them entitled “essays.” Some of these pieces –“Wooden Houses,” “About 1836,” “A Modest Treatise”—were commissioned by various art galleries. 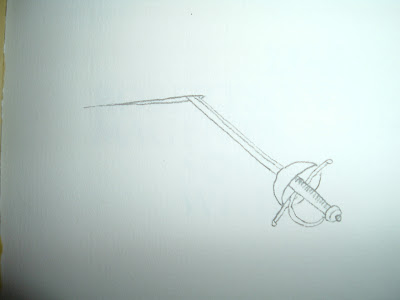 Lisa Robertson's writing astonishes. She is an exquisite fabricator. Her tools are numerous and baroque and startlingly contemporary. The book's frontispiece, the little pencil illustration of a sword entering a wound, is precise and accurate. The wound is embedded in the page. And the selves and worlds we fantasize and experience there. Elaborate torture chamber of language and being’s pleasures and excruciations. Robertson has used this sword to unhook the clasps of the fragment, self, origin, eros, gender, language. Or she lifts a flap of skin so that a moment later the absence of the sharp slice of pain is experienced as a pleasure…..or, is it the slice that is the pleasure? So many sensations at once and then each is disarticulated.

The result: “All method is a/ demonstration of history.” Robertson writes simultaneously of metaphysics, Epicureanism, aesthetics, history, rhetoric, the visual, debates in contemporary poetics, the body, mortality.

“…that while the first bodies are being carried downwards by their own weight in a straight line through the void, at times quite uncertain and uncertain places, they swerve a little from their course, just so much as you might call a change of motion. For if they were not apt to incline, all would fall downwards like raindrops through the profound void, no collision would take place and no blow would be caused amongst the first-beginnings: thus nature would never have produced anything…….

…..Again, if all motion is always one long chain, and new motion arises out of the old in order invariable, and if the first-beginnings do not make by swerving a beginning of motion such as to break the decrees of fate, that cause may not follow cause from infinity, whence comes this free will in living creatures all over the earth, whence I say is this will wrested from the fates by which we proceed whither pleasure leads each, swerving also our motions not at fixed times and fixed places, but just where our mind has taken us? For undoubtedly it is his [sic] own will in each that begins these things, and from the will movements go rippling through the limbs.” (“Book II.” De Rerum Natura. 1924. Trans. W.H.D. Rouse. Cambridge, MA:: Harvard University Press, 1997.)

“Lucretius said that to flourish we must absorb more than we exude
Of elements, minerals and so forth.
We call this food, and it fabricates us
From the inside. But much does drip and escape
From the corporeal tissues and we use this
Excess to make belief.
It is normal therefore for the body to perish
From incessancy of belief. In the meantime
How about a milky pablum, nutmeats
Quickened with liquor, the iron
Our blood sucks from roots, the delicate
And ingenious bodies we call pastries
Or most intimate aspects of animals
Honey, sap and other lucky seepage
Various salts and the slightly bitter textures of leaves:
From a fortuitous concourse of atoms
Blond foams, dripping vineyards, these curved
Spontaneously out of the pleasurable earth.
Clots of rubbish washed up on shore became us.”

There is hunger and eating and animals and atoms and melancholy and ornament. The swerve is a delight and productive. Change is frequent and who doth frequent with it shall be here a woman or women. Lucretius as a girl.

“Frankly, even our genders stutter and
Choke. Please believe that I myself claim no
Innocence from vigorous paroxysms
Of excretion: I pine for the body’s
Nice parataxis, the heart’s inestimable
Syntax and the good grace of your gaze; but
Here my enunciative platform borrows
A diction from judicial surfaces, which
Are also points of rest.
--from “Coda: The Device” (85-86).

The body as house. Subjectivity shimmers. Another ornament: “I’ll solicit nothing/ But ornament, that spacious edifice--/Kinds of ornament are change/Because it will change anyway” (20). The world around an animal’s throat. Somewhere in the distance, architecture. Darkness. Dazzlement.

Utopia is so emotional.
I’m speaking of the pure sexual curves
Of utopia, the rotation
Of its shadows against the blundering
In civitas. History does not respond
To this project—History, who has disappeared into
Architecture and into the
Generosity of the dead. This states
The big problem of poetry…
--from “A Hotel” (19).

Robertson’s book is capacious. Her diction, syntax, images—all continually surprise and move in unexpected directions. Hers is a meditative, intellectually expansive, melancholic, and scintillating language. The experience of reading the book recalls a scene from John Schlesinger’s 1967 film Far From the Madding Crowd which I recently saw again. While the film is dated, its slow camerawork (Nicholas Roeg) and the pleasures of looking at Julie Christie prevail. In the middle of nowhere in England, in a landscape of rolling, yellowed hills, Christie as Bathsheba Everdine is dazzled by the dangerous and sexual swordplay of Terence Stamp as Captain Troy. The blade comes so close; it glints in the sun; it undoes her. The danger is real.

The question of the origin of painting is obscure, or Egyptian.
Pliny says it had to do with combat
and victory
also known as war and triumph.
Such was its beauty
that a crow
would attempt to enter the tableau
to peck at the corpses (69).


Let me leave you with one of the final pieces from Lisa’s book:

The House is humble and commodious. Here it is always fluent. Here we listen to voices. Here also are solid things. The House is a mould. The common division of the House is into three principal tiers—vegetal, sensitive and rational. The souls inhabiting the House migrate among levels. The inferior may be alone, but the superior cannot subsist without the other. Let this epitome suffice: the rational cannot subsist without the vegetal. The House is build from this complicated love really. Repeatedly we meet its surfaces. We see the House against the long scroll of politics, which is landscape, but also the House itself is a furled scroll. In the scroll of the House we are compelled to preserve what elsewhere we desire abolished.

Ten things are framed by the House.

These are the ten things.

There is no House that does not introject its landscape of doubt. There is no House that is not a clock. We manipulate memory to make it or we dreamed its downward sloping ceilings as percussive surfaces for the sonic augmentation of rain. We wrote each of the tawdry brownish wallpapers. We dreamed the silent harms. When the porch rots we dream its decay and when the kitchen sags with the weight of our appetites it is an extremely beautiful curve. With particularity we dreamed the dry sound of pigeons’ feet on the asphalt roof in summer. The clicking and grinding of the House in wind is so lively the animals won’t rest. Sometimes in the House we let our outward senses sink. This is sometimes called sleep and sometimes called thought and it has to do with the economy of the House.

When asked if the House is natural or non-natural we reply: The House is strange, wayward, arcane, pedantic economics, or the House is an organ of melancholy. How are we to know if it is cause or effect, a symptom or an unease? The House is a ladder. The House has a mirror. The apple tree lifting with sparrows. Does the form of desire change? If we dilate the House the tiers of habitual emotion will be dissolved in its vastness. There will be gestures that don’t complete us. There will be surfaces. When we leave the House we are light-footed (94-95).


You can find links to numerous reviews and interviews with Lisa Robertson at Coach House Books web site here.
Posted by Robin Tremblay-McGaw at 12:44 PM