This fall Small Press Traffic board members are curating readings; the enjoyable afternoon of October 6th, 2013 was organized by Camille Roy who introduced Mary Burger and Rachel Levitsky as two women conducting compelling experiments with the  novel. We heard generous portions of Burger's and Levistsky's work.

A number of us were acutely aware of the fact that the audience, interestingly, consisted mostly of women. I think there was one man present. What's up with that?

Rachel read from THE STORY OF MY ACCIDENT IS OURS and since I recently reported on Rachel's reading in New York, I will refer you to that post here on xpoetics. 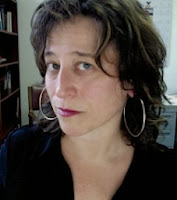 In this space, we'll now turn our attention to Mary's compelling reading. Here's a thick slice of her latest, in progress:


I finally understood the appeal of spiderman.  To take an injury and turn it into your greatest power.   A power that only you had.   A way that you could save anyone.

I grew up in a religion of human sacrifice, though it wasn’t explained that way at the time.  Forgiveness came in a package of spikes and thorns.  Blood ran calmly from the palms of the hands.  We all pantomimed the anguish abstractly and repeatedly.


I saw one building turn into flames.


How long does it take to pull sheets off a bed and twist a simple rope and tie it to a metal windowframe?  How long to wonder whether this is really happening?   How long to throw a leg over the windowsill (dusty terra cotta, push aside the plants and books)?  How long to test whether the knot will hold?  How long to look into the eyes of your dear heart and decide which one of you goes first?

It was too long.


All the freaks and loving weirdos gathered their bags of drugstore incidentals.  It was almost Weimar Berlin.

We got dry leaves in our ass cracks when we rolled around on the ground, under trees, off the trail.  Twigs poked our soft butts that weren’t used to daylight.  Dear heart, life is not for novices.

I got a pen with a small light at the tip, to write down what I thought about during the night.   No lamplight, dear heart, don’t wake up.

We could throw a party for all our failed selves, awkward and shy, impulsive or raging, but none would be as bad as we once thought.

He walked his dog with the lump in its side up one alley and down the next, on a leash of rope.  The alleys drained to the middle, no gutters, no curbs.

I bought trinkets for quarters and gave them away.

At a small hotel a few blocks away, in the piano bar with dark paneling, we waited out the snow.   On the walk home, only fire trucks pierced the quiet.

Dear heart, who should go first?  Rapelling down a brick wall.  Who yelled out from the other windows, tie knots so you can hold on?

In the hallways, the giant finger-swipes of the fire fighters’ sooty gloves where they ran their hands along the walls, feeling for doors.  Every door standing open, splintered with an axe.   Inside the doorways, nothing was different.  Or nothing was there.

All her friends offered dishes or towels.  A teapot and a shower curtain.

In the trackless snow everything looked more the same.

His dog with the lump in its side examined the base of every dumpster every day, looking for who had been there.   They walked slowly, he with the rope in his hand, but usually slack, they held the same pace side by side.

Grid of the windowpanes, grid of the bricks, grid of the alleyways, grid of these boxes of rooms.  In the closets, more boxes.  In one room, a bloom or a billow.  The end of the grid starts with the lick of the fire, the curl of the smoke.

I thought if we brought down the grid it would mean we could live in blind corners.  In suspense.  To be everywhere at the same time, with everything still possible.