An Unending Reading: Part 1 of an Interview with Beverly Dahlen 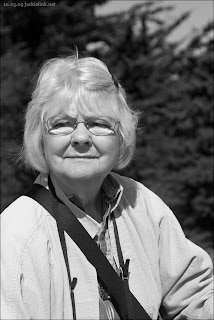 This interview with Beverly Dahlen was conducted via email in October 2009. It will appear here in several installments. Enjoy!

Click HERE to read some of Dahlen's poetry and HERE to read tributes to her from various contemporary writers.


RTM: Your A Reading 1-7 begins with a quote from George Steiner that references Wittgenstein and psychoanalysis. Can you talk about how you came to the idea of an “unending reading”? Life and writing as "the interminable reading. the infinite analysis." What got you interested in psychoanalysis? How did you come to be reading Freud and Lacan? And how was your interest in it perceived by others in your immediate community?
*
BD: It's difficult to untangle all the threads that lead to the source. I think the immediate idea came from Steiner, the book cited in the epigraph, but also from the method proposed in the first creative writing class I ever attended (right out of high school). My teacher suggested writing in a freely associative way, and I found that worked for me. I had been reading Freud already in high school. I was baby-sitting for some people, and one night I searched their bookshelves looking for something to read. They had a copy of that old Modern Library Edition of the works of Freud, and I dipped into it. After I read for a while, I realized it was forbidden knowledge, and so of course I kept reading that book whenever I was there. Later, Norman O. Brown's Life Against Death would be an enormous influence. And I suppose I started reading Lacan when everyone else did sometime in the late 70's. A book I credit highly was Juliet Mitchell's Woman's Estate which was a clear defense of Freud in opposition to the attacks on him from the women's movement at the time. Freud was the enemy. Mitchell's book uses Freudian analysis as well as every sort of other political analysis to illuminate, as she calls it, "woman's estate."

I forgot to mention Freud's essay: Analysis Terminable and Interminable.

*
RTM: Can you tell me a bit about how you and Kathleen Fraser and Frances Jaffer met and how you came to found the groundbreaking journal, HOW(ever)?
*
BD: Kathleen and Frances and I had been meeting for some time as a reading group. We exchanged our work with one and another and critiqued it. Kathleen had the idea to begin a small journal, something manageable, that the three of us could do together. We were interested in what other women were writing---women whose work we hadn't seen before. And we did make some wonderful discoveries----Diane Glancy, for example, the native American poet.
*
RTM: Your books, particularly A Reading 1-7 engage with, among other things, the work of Lyn Hejinian-- "writing is an aid to memory” and "a thought is the bride of what thinking," (75) and Ron Silliman--"Ron says what 'is brilliant but all wrong.' Phallus the first division, woman atomized, what is that to him, to me not that, but that also” (85). What is your relation to Language Poetry? And the New Sentence? Has that relation changed since the writing in A Reading 1-7?
*
BD: In the late 70's the language poets' star was rising. I was sharing a flat on Connecticut St. with Kathleen Frumkin and Erica Hunt--two persons who were at the time very involved with the LP movement. Barrett Watten lived right across the street. It was a very exciting time. I went to the lectures, to the readings, and sat up many nights talking about "language theory." I subscribed to L=A=N=G=U=A=G=E and read Saussure. But I was never quite convinced, because my bias ran toward psychology and, on the whole, there wasn't a great deal of interest in that. I don't know if "the unconscious is structured like a language" as Lacan claims. But I was pretty certain that theories of language that left out psychology were too limited for me. But of course I read their work---I liked Lyn's work, and Ron's and I argued with it in my own writing. I liked a number of the poets who had associated themselves with the movement---Kit Robinson and Alan Bernheimer come to mind. They were all very intelligent and witty poets, given to punning and irony and non sequiturs---really amusing stuff, like the 18th century. But I'm not a language poet. In these days I'm reading The Grand Piano, I check Silliman's blog, but I don't read language poetry more than (maybe less than) other kinds of poetry, or other kinds of writing.

I should add that it isn't quite accurate to say no one in the movement was very interested in psychology. Steve Benson has become a therapist and I believe Nick Piombino is either a psychiatrist or a psychoanalyst. There may be others I don't know about.
*
RTM: What if any engagement does your work have with the Beat writers? In A Reading 11-17 you write: “what is it I wanted to tell myself, who is it, another, some, Kerouac, unlike him I use the commas a lot “ (68).
*
BD: This is just a brief allusion to Kerouac's style. I liked reading that flowing prose, I loved On the Road. In the mid-50's, when I was still living in Arcata, a friend came up and played a tape of a reading that may even have been the first reading of "Howl" at the 6 Gallery. (Oct. 7, 1955). I was stunned by that poem. It seemed to me to have been a testimony, a prophecy, a vision of the horror of life in the US. I was already determined to go to SF, but I was more determined than ever when I heard Ginsberg. I did come to SF the following year, and guess what, the first reading I attended here was Allen Ginsberg's at the Telegraph Hill Neighborhood House. He didn't read "Howl" that night but he read lots of wonderful poems, probably the one about Walt Whitman in the supermarket, among others. I don't know how much my own work is influenced by the Beats---that would be for others to decide. But I am on good terms with the people at the Jack Kerouac School of Disembodied Poetics!
Posted by Robin Tremblay-McGaw at 9:56 AM