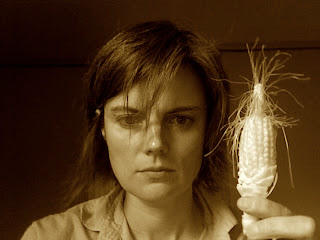 Statement on Crossings
When you asked me to comment about my novel in terms of "Crossing," I didn't think I would have much to say, but now I think I might be able to say a little. I'm not sure if the novel is cross-genre. (That's the first "cross" word you suggested.) There's a couple of poems excerpted in it. But there's a lot of poems in a George Eliot novel and I don't think that's cross-genre, nor would many other people. And a couple people have suggested that it isn't a novel, but a poem disguised as a novel. That might be true. I paid a lot of attention to the sounds of words and the breath of the reader, and I have never really written prose before, or taken a class on how to write prose, but only know some things about poetry. So I am sure I didn't write a novel correctly and only used what I knew about poetry to try to write what I thought was all along a novel. So maybe it isn't a cross-genre work, as much as a work that failed to cross over into the genre it wanted to be. That seems to me the most satisfying answer insofar as the whole novel worries about change being possible. Why shouldn't the form itself?

And the more I read about how Bacon liked to turn peoples’ faces into heads of meat so they could melt away and not have to be people anymore the more I wondered if when he walked down the street and looked at peoples’ faces if he could actually see how much the people didn’t want to be in their own faces anymore. And then I wondered what it would mean to see a person’s face and see how much the person didn’t want to be in her face and so because the face showed so much how it didn’t want to be a face the person looking at that face would not see the face but only see this melting head of meat that was really the first step in helping the person escape her face. And when I thought about that I began to think that the painter was almost like a saint saving people from the flesh and helping them become part of the spirit world faster and if he only could do in real life what he did in his paintings there would be so much less sadness in the world.